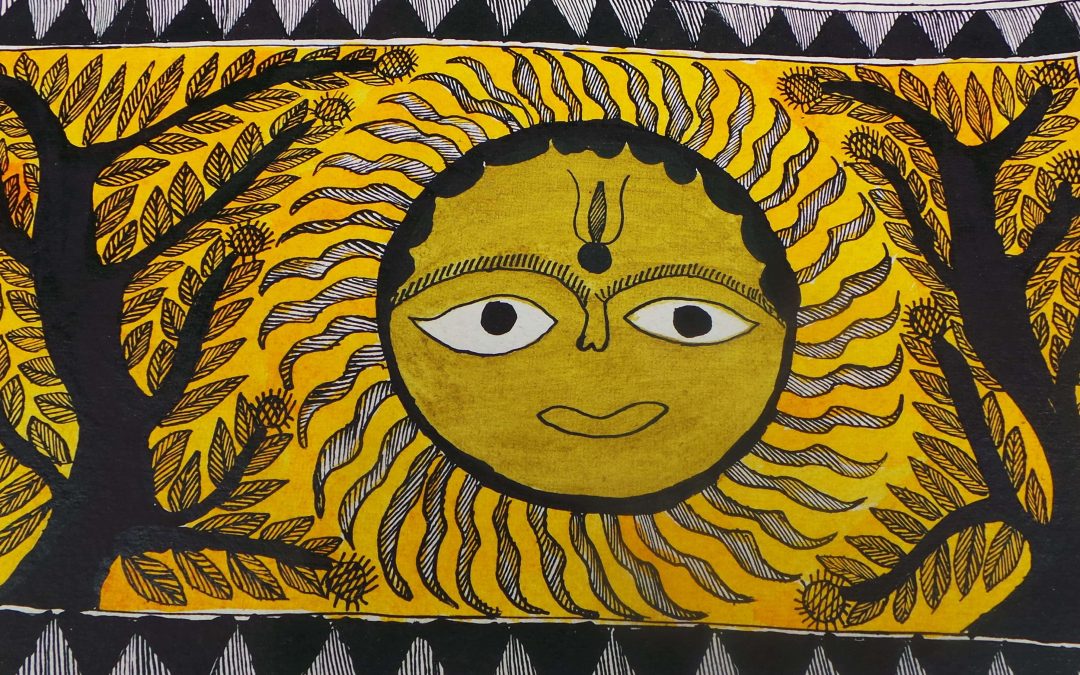 A Glimpse of Madhubani

Madhubani per se requires no introduction. It is relatively popular among folk arts of India and is from Bihar. But for the first time since I started writing, I am not sure about where to begin. Should I begin at the beginning, when Sita from the era of Ramayan began painting in Mithila. Or shall I introduce you to Madhubani, as I came across it  in a book by Jyotindra Jain- ‘Ganga Devi: Tradition and Expression in Mithila Painting’. Or shall I introduce you to Mr. Ashokkumar Das, grandson of Late. Jagdamba Devi, the first artist in Madhubani to be conferred a national award in 1970 and Padma Shri in 1975. 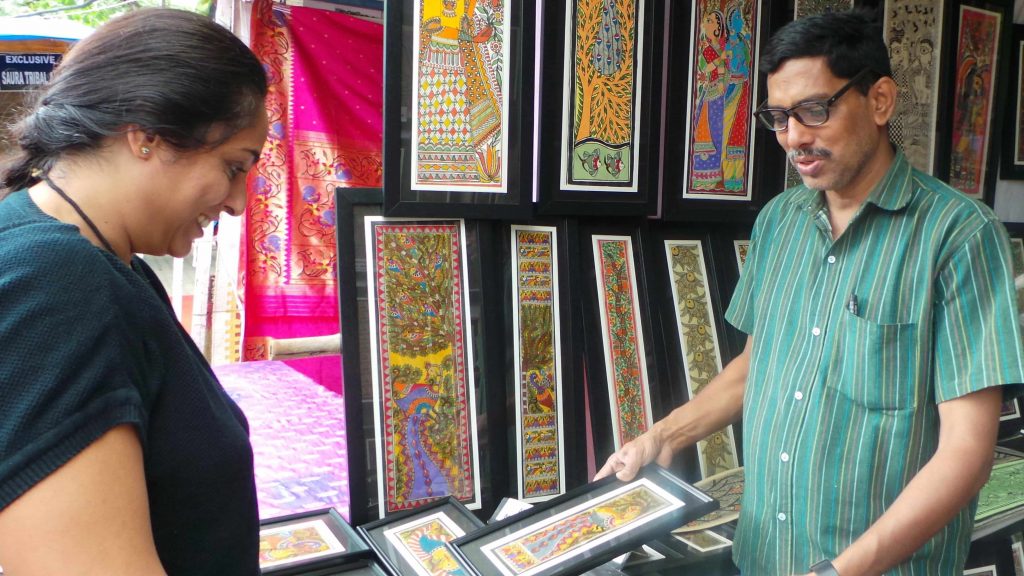 So this is why, this post is only ‘A Glimpse’ of Madhubani. Let me start with Mr Ashokkumar Das, an artist from Jitwarpur village, Madhubani district, Bihar. He was in Bangalore as part of Dastakar exhibition. The first thing he mentions as we chat, is that there are five national awardees and 10 state award holders in his family. No mean feat, definitely! I am attracted to some intricate paintings with a lot of line drawings and these he enlightens me are in the Godna form. 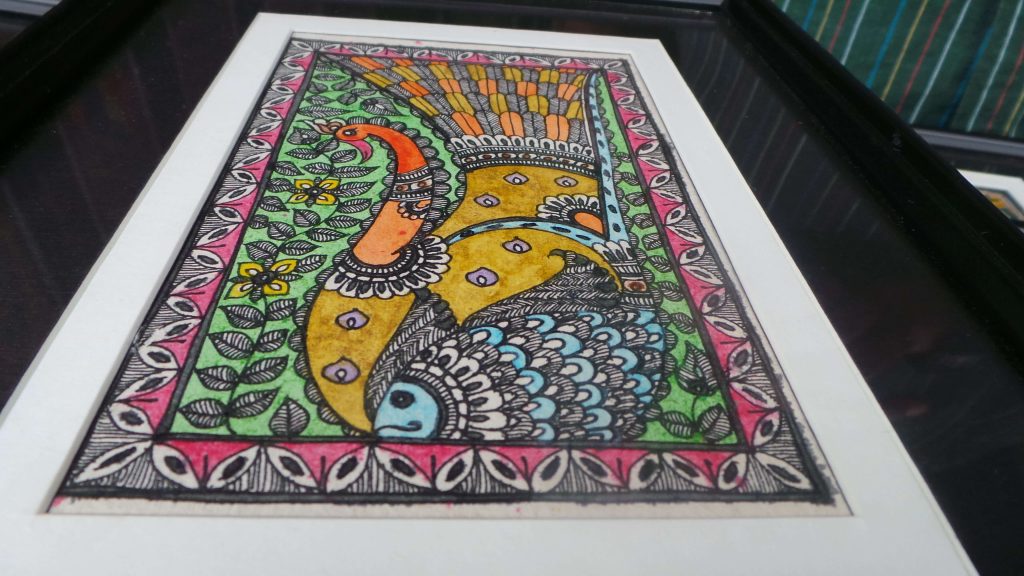 There are four main forms in Madhubani or Mithila paintings. These forms were earlier dictated and bound by the caste or varna system prevalent. Now with the abolition of caste system, there are no restrictions. So the artists have a freedom in their artistic expressions and are not bound in any way.

The Bharni Style- This was mainly practiced by the upper castes and depicted Mythological characters in epics, especially the Ramayana and Mahabharatha which the womenfolk knew from continued recital.They used rich vibrant colours and had no restrictions. Sita Devi is considered a pioneer in this form. Bharni means filling. As the forms of Vishnu, Krishna, Kali and other Gods depicted are filled with colours, so the name. 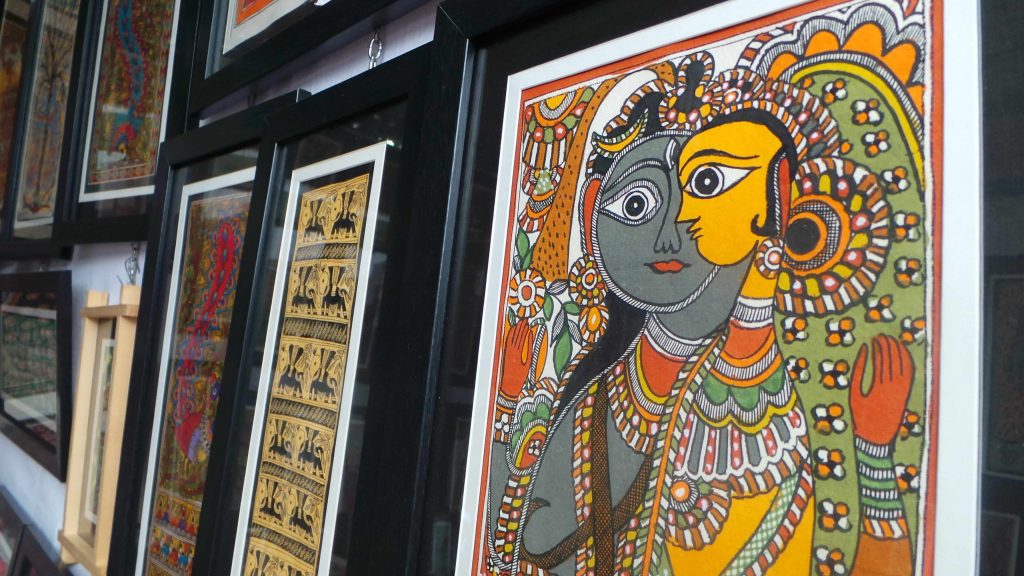 The Katchni style- The Kayastha community practiced this form and could depict Gods and Godesses, but the colours used were limited to black and red. So they are not as vibrant in appearance. But they make up for the lack of colours with lots of linear drawings, lines and patterns. This in turn results in a beautiful form. Ganga Devi Is considered a pioneer in having created different types of line work and renderings instead of colour. I just love her work and will need a separate blog post for her…so that will have  to wait another day. 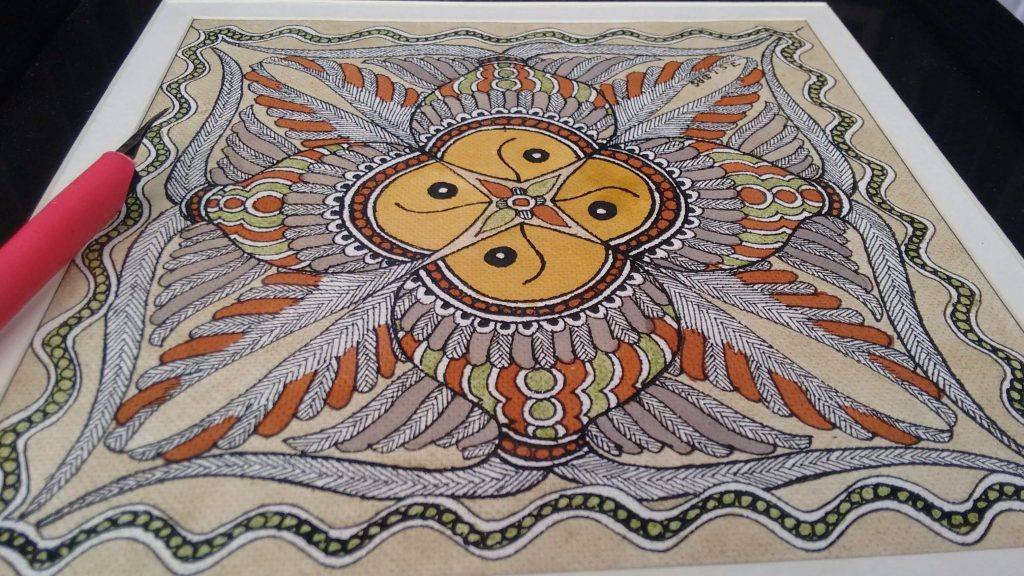 Tantric or Geru or Godna style- This was mainly practiced by the lower communities, as they did not have any exposure to the holy texts and depicted nature as around them. The filling of the background was done using diluted cow dung as wash. Sun, moon , animals, birds and the tattoos on their bodies usually formed their subjects. Some colours were allowed to be used. 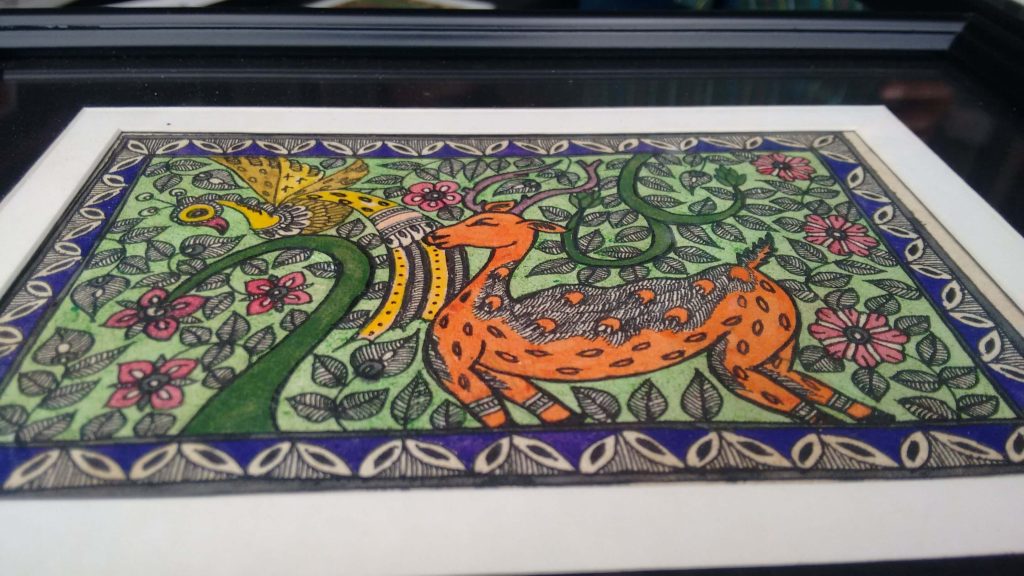 Kohbar Style- This is a unique painting that is done on a wall in the nuptial chamber where the wedding ceremonies take place. It is a symbolic painting which has a very special place in Mithila’s culture. The painting is dominated by the lotus flower which symbolizes female and the bamboo plant symbolises the male sexuality. According to the ancient texts, Shiva and Parvathi are considered to be the happiest and most successful as a divine couple and they are depicted to bless the newlyweds with the same love and success in matrimony. The sun and moon are also depicted. The water creatures, love birds are symbols of fertility and love. 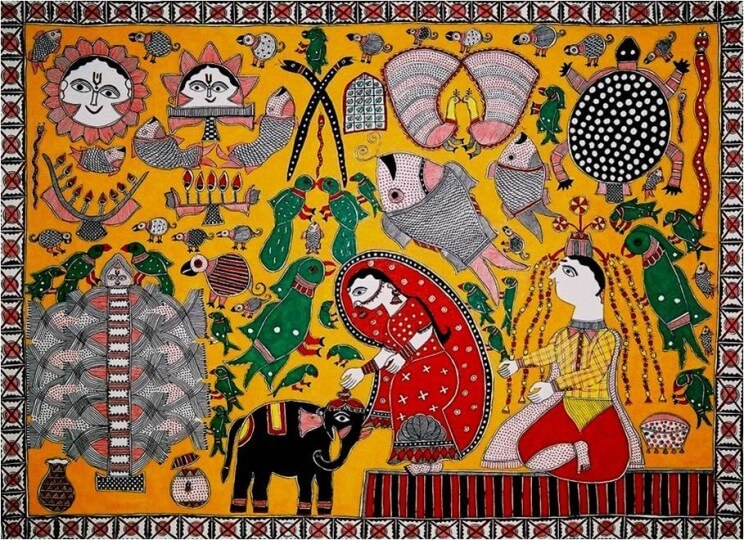 You see here, many of the paintings have fish as a common motif. That’s because fish is an ‘all in one’ symbolising love, fertility and prosperity. The artist says, “Maach, paan aur makhaan, Shubh maana jaata hai’”. (That is fish, beetle leaf and lotus seeds are good signs.) Well, we all need good signs. 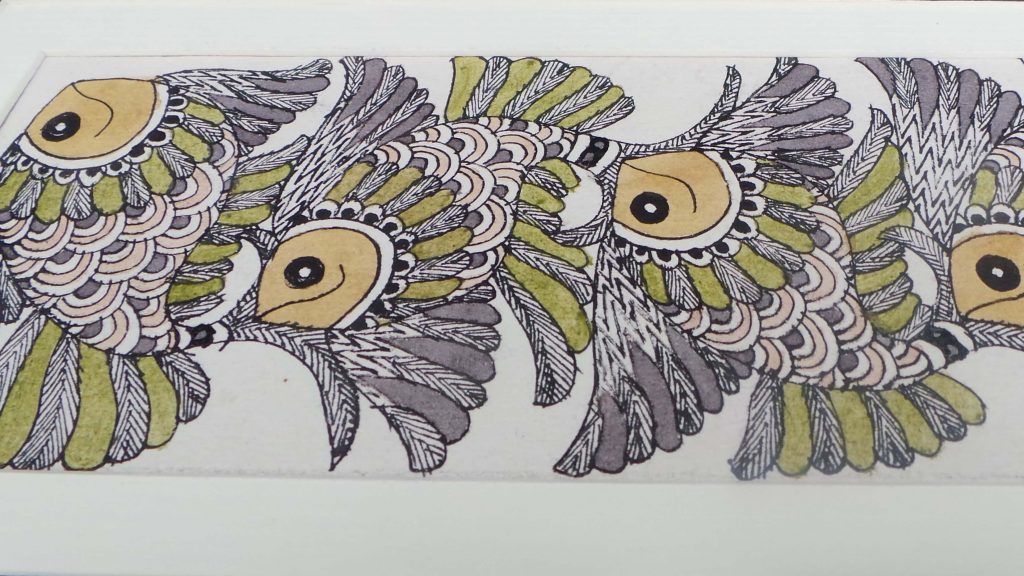 When I ask him about the support they get, he is all praise for the state government and the Government of India. In fact the saying that, ‘Every cloud has a silver lining’ holds true for these artists. It was only in 1960’s when they were badly affected by draught that the government looked for alternative income sources and funded the artists to use Madhubani art onto paper, bringing the art to the limelight. I wish ‘Kaavi kale’ would also get a similar lease of life. 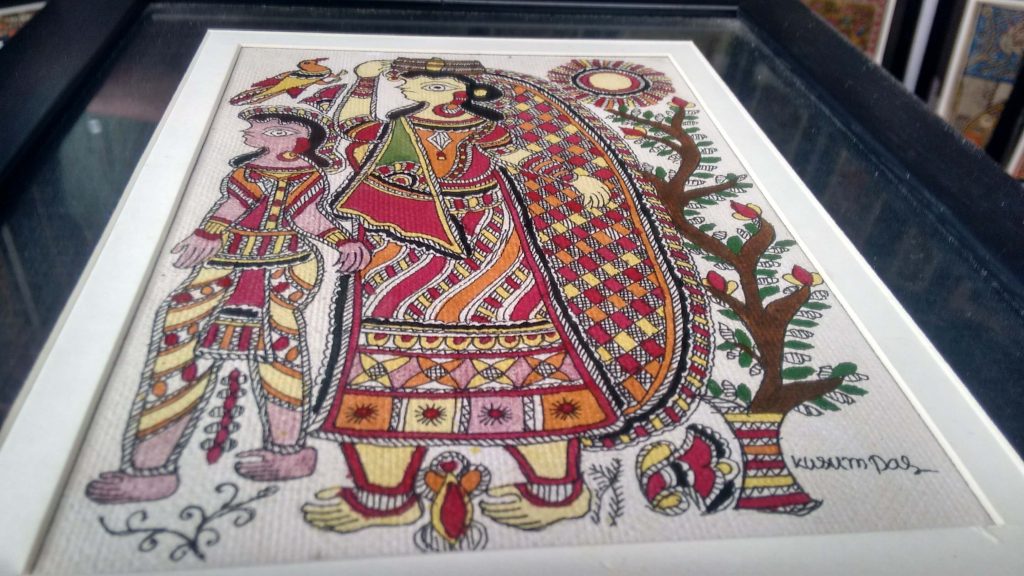 I find it very fascinating, that Madhubani was mainly practiced by the womenfolk and passed on from one generation to the other. In fact the bride’s skill in this department was considered very important for choosing a groom. It was only after its commercialization and recognition by the government, that men also entered the arena of painting. Mr. Ashokkumar Das gives me a snippet of gossip here…if any of you remember the serial ‘Surabhi’ hosted by Siddharth Kak and Renuka Shahane? Mr. Das tells me that he took them around to the different families practicing this art as part of the show. Well, I am happy that I got to meet him. He has offered to show me around all the artists’ homes when I go to Madhubani. And off course I am going…..

Hope you enjoyed this post. Have a great week. Lots of twinkles to you!