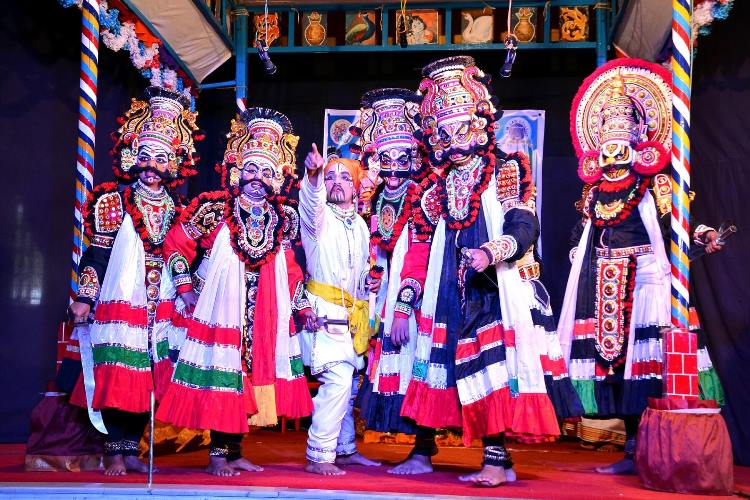 An Introduction to Yakshagana -Part II

Welcome back…it’s time for the Yakshagana stories. If you haven’t read up on the first part you could do it here or if you want me tell you a little something about it, the video is here.

Yakshagana literally means the song of the demi gods. It is a beautiful representation of our rich and diverse culture, language and history. The episodes of the play are called prasangas. These are composed based on parts from the poetic epics, puranas and literature in Sanskrit. Prasangas are scripted keeping in mind the musical components, dialogues and dance. Parthi Subba from Kumble (though there are alternate opinions on his place of birth), is considered to be the father of Yakshagana. He is believed to be the first one to compose Yakshagana Prasangas. Earlier, Yakshagana was purely a male domain, but now women and children are also carving a niche for themselves. Right from composing Yakshagana Prasangas or episodes to enacting pivotal roles on stage, women are now a part of Yakshagana. 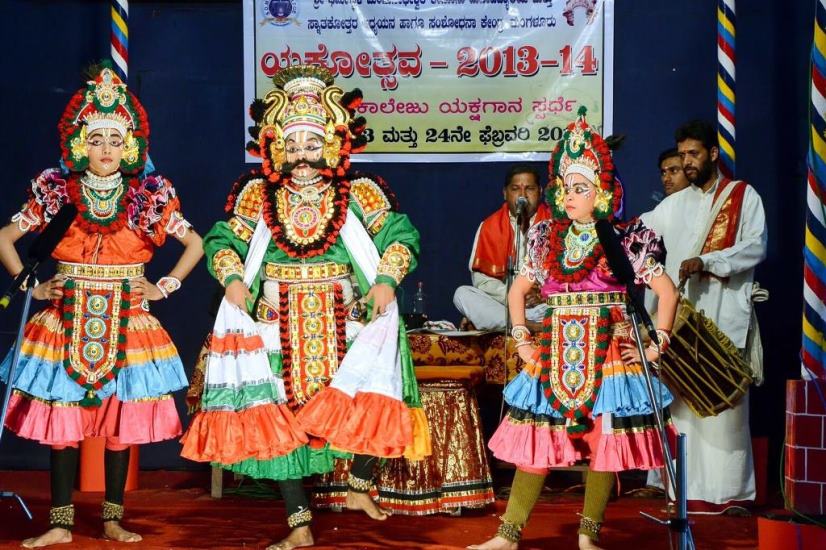 Dr Manjunath Shetty narrated many short stories based on love, passion, fate, destiny all of them so entwined in our own lives…I can’t make up my mind on which ones to leave and include.

Story on Decisions and Attitude-

There was one on Jaya Vijaya, which you might be familiar with. It was the age of gods, saints and curses. In the distant land of Vainkuntha (Lord Vishnu’s abode), the sentries at the door Jaya Vijaya encountered 4 young saints, no more than 5 years old. They were the Manasputras (Sons born from Brahma’s thought) who had the boon to remain child-like but were great wise saints. Feeling a sense of importance, the sentries refused entry to the saints. Inspite of repeated entreaties, they were refused. Enraged, they curse the sentries to a lifetime on earth as mere mortals. Desperate, Jaya Vijaya request Lord Vishnu to lift the curse and restore them to their position. The Lord gives them two options. They can either finish 7 lifetimes as devotees of Vishnu or opt for 3 lifetimes as his enemies. Thereafter they would return to Vainkuntha forever. Without a second’s thought, they feel that 3 lifetimes are better than 7 and choose to be Vishnu’s enemies on earth.
In their first lifetime they are born as Hiranyaksh and Hiranyakashyap in the Satya Yuga. Vishnu takes the form of a boar (Varahaavtar) and Narasimha (fusion of lion and man) and kills them. In their second Lifetime, they are born as Ravana and Kumbhakarna, killed by Rama an avtar (form) of Vishnu. In their third lifetime, the Thretha Yuga they take the form of Jarasanda and Dantavakra, killed by Krishna, another form of Vishnu.
It is only after these three lifetimes that they attain moksha (eternal peace) and come back to Vainkuntha. So now we get see them in all the temples of Vishnu as sentries. 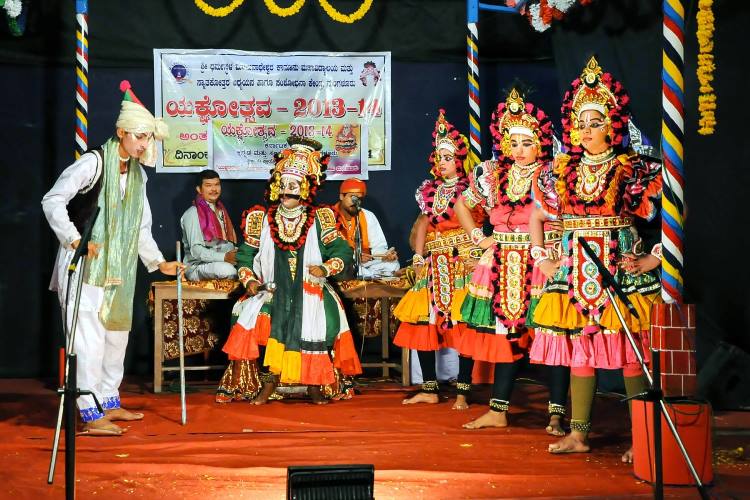 Yakshagana has many prasangas from the Mahabharatha, an epic narrative of the Kuruksetra war between the brothers- Kauravas and the Pandavas. During the war, Sanjaya is blessed with ‘doora drishti’ which is nothing but seeing in real time or something like ‘live streaming’ (quite advanced na?). But on the last day he is unable to see what is happening on the battlefield and Dhratharashtra, the king of Hasthinapura asks him to go to the battlefield and find out the whereabouts of his son Duryodhana. This is when all of Duryodhana’s relatives, brothers and friends have been killed and he is the only one left of his vast army. Sanjaya finds Duryodhana hiding away from the eyes of the enemy, the Pandavas (they are the good guys) and there is a discussion on how fate has brought Duryodhana down to his knees. Notice the change in tenor, when Dr. Manjunath Shetty sings for Sanjaya and Duryodhana. 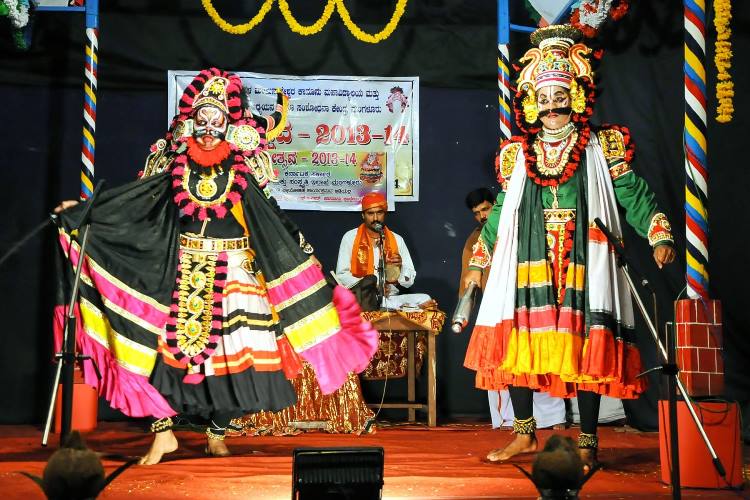 Song on Wooing a Woman and an open Proposal-

Then there’s one on romance and how a man woos a woman. Immediately on seeing her beauty he proposes and also talks of being one with her soul. An open proposal is issued.

Story on love and war, with a ‘Happily Ever After’- 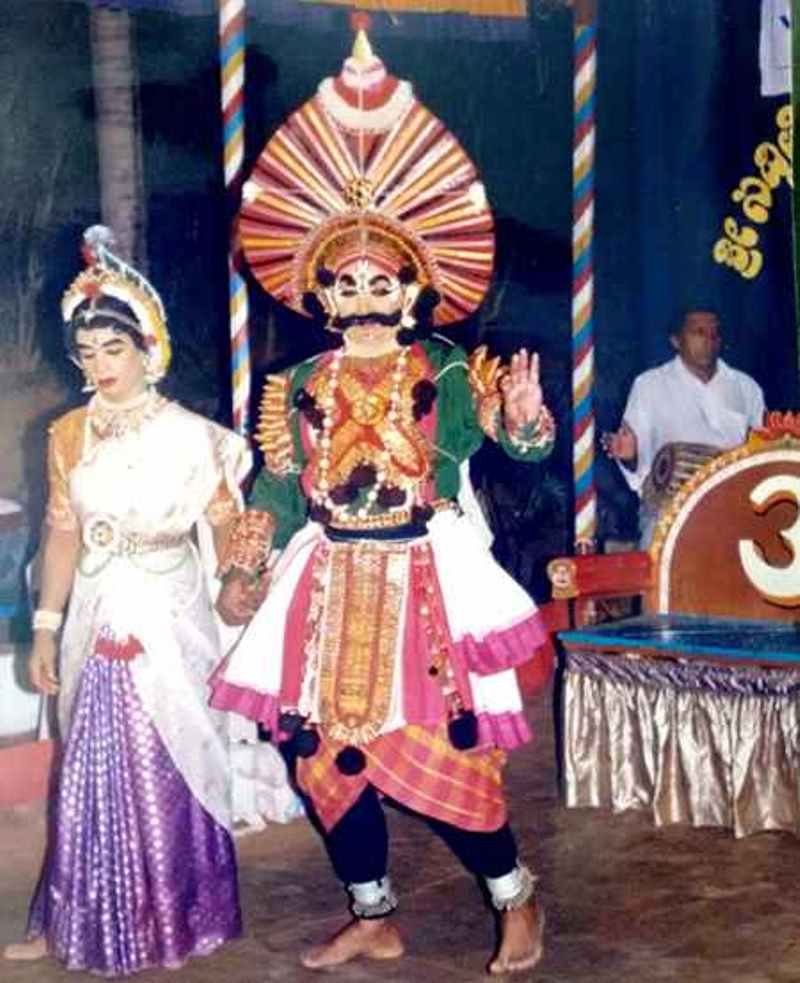 Dr. Manjunath Shetty as Gunasena -An Old memeory that he shared with us

Story on play, modesty and nature-

There’s one more on Sahasrarjuna. He is strong, with a thousand arms and a playboy who loves the company of ladies. Here is a small snapshot of him calling out to the ladies for some water sports. A beautiful song describing the beauty of nature is also included. I just loved this song!

Having helped Sugriva win the war against his brother Vali, Rama is promised aid to free his wife Sita from the clutches of Ravana (This is famously referred to as Sugrivajne). But months pass by; Sugriva does not come with the promised army of monkeys. Rama asks Lakshmana to go and find out what is taking so long. Rama is patient, but Lakshmana is raging at the delay. Here Lakshmana is pacified when he understands that it is not easy to bring together an army of monkeys, monkeys who jump from one tree to another, never still for even a moment. With this instance, Dr.Manjunath Shetty says quite like us and our minds. True, isn’t it? 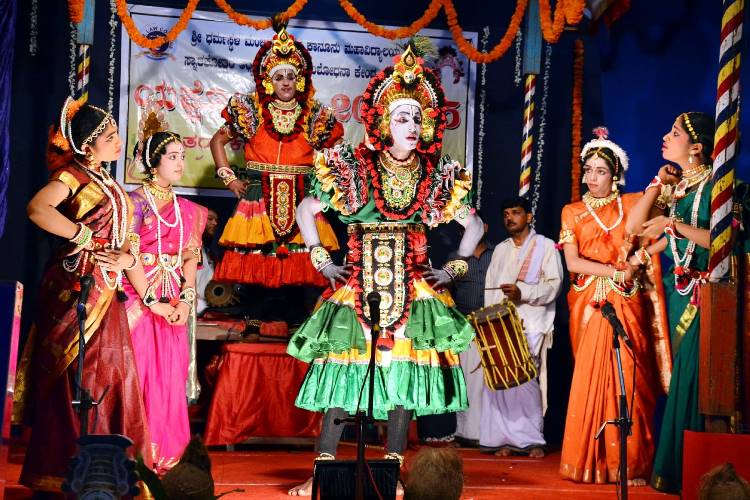 Closure with a prayer-

Yakshagana begins and ends with a prayer. 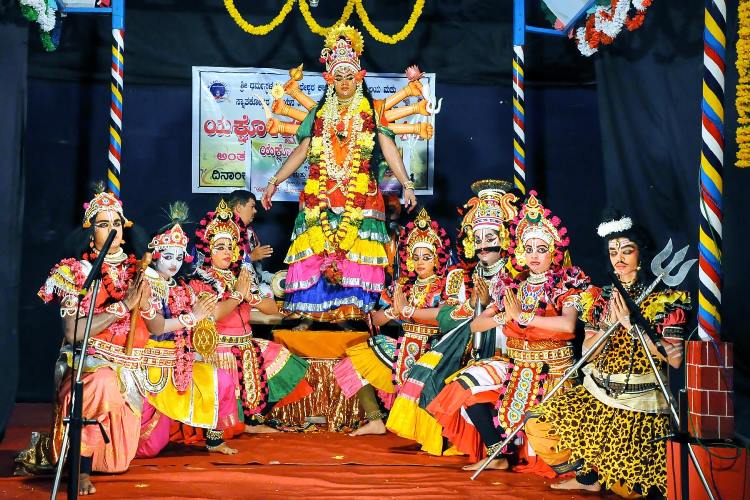 And these are just some snippets on the whole story. Yakshagana is the art which brings to life, characters of the bygone era. It is not of the past but of the present, where it keeps evolving. Don’t let go of it! Savour it and the experience will only make you richer.

Lots of Twinkles to you.
Have a great week.
Anupama

PS- All pictures are from Yakshotsav SDM Law College Mangalore. I wish to place on record my gratitude to Dr. Manjunath Shetty for having shared his knowledge and talent with all of us at Strings of Heritage and our readers.