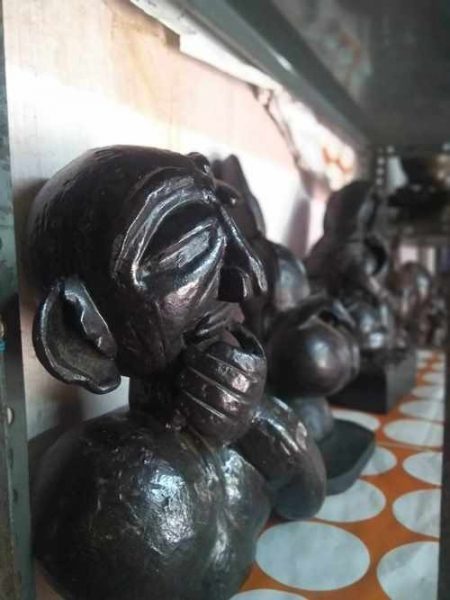 Art from waste is taken to the next level by artist Venkatraman Bhat. It was a chance encounter with Mr B R Bhat at Venki Palimar’s Chitralaya Art Gallery that led me to this artist’s home. When I meet him, he narrates the incident of Mr. P R Thippeswamy’s visit to his house in Davangere, the Chairman of Lalitha Kala Academy in 1991. Seeing his work kept at a certain height, he thought the material used was terracotta, but was pleasantly surprised when he learnt that it was with coconut shells. The artist fondly remembers that Mr. Tippeswamy was skeptical that modern art could be created with this medium. Taking up the challenge, Venkatraman Bhat gets to work and creates Shakti(strength) and Shoshithe(the exploited). Mr. Thippeswamy is impressed and the works of art feature in the 1992 LalithaKala Academy exhibits. 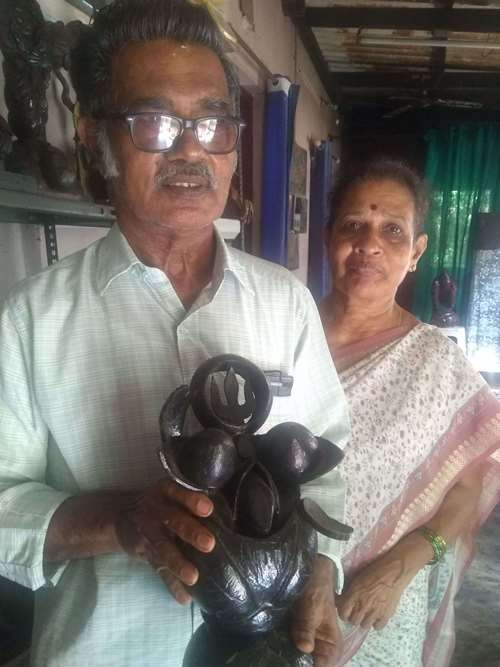 The depth of his creativity and thought are revealed when he explains each piece of art. Shakthi is seen as the mother of the three supreme powers, Shiva, Vishnu and Brahma. She inspires as the mother, the wife and the daughter. She nurtures the entire universe with her compassion and affection. He brings to life Shoshithe or the exploited, when he talks of the woman in society. Without a voice in the social sphere, the lips are locked, seen as a colourful butterfly, her beauty bewitches with no regard for her mind. A machine to reproduce at will and whim, she is constantly under fire. He sees her as without hands as she has no financial freedom and is dependent on father, husband or son. But off course, Mr. Bhat, looking at me quickly adds that this depiction is more of the past than the present! 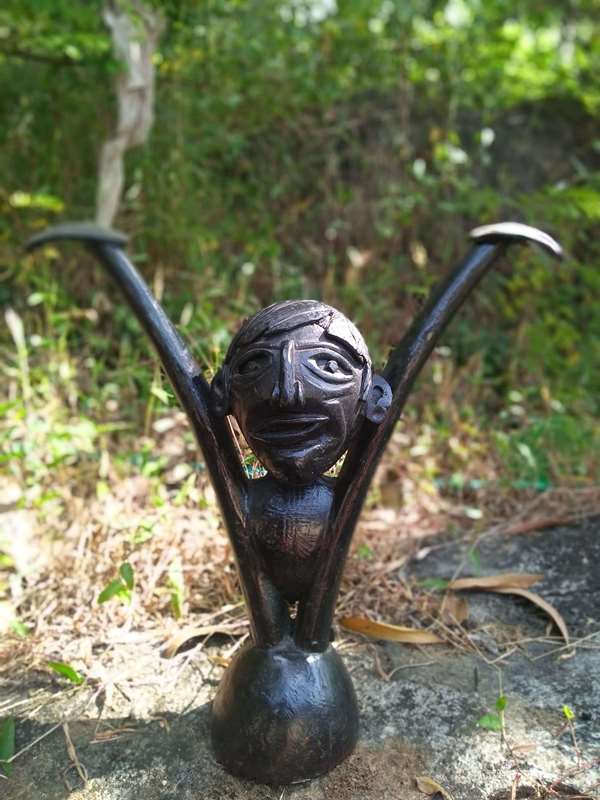 An entrepreneur settled in Davangere, he moved to Udupi only a few years back. When in Davangere, he has overseen a number of Community Ganesha installations at the time of the Ganesha Chaturthi festival. He shares pictures with me of Ganeshas made of silk cocoons, Almond shells, arecanuts and even cake with Om written all over. Living in a modest home with his wife, he is a happy man working at his creations. He recalls the time in Davangere nearly 46 years back when he started working with coconut shells. He would keep them soaked in water the entire day and come home in the evening after the day’s work. Hoping the hard exterior would have softened making it easier to work with. He now laughs at his own struggles and experiments. Having no mentor or internet, he experimented with sandpapers, chisels and ordinary tools. He still keeps some of his early creations and shows me the contrast on how far he has come. 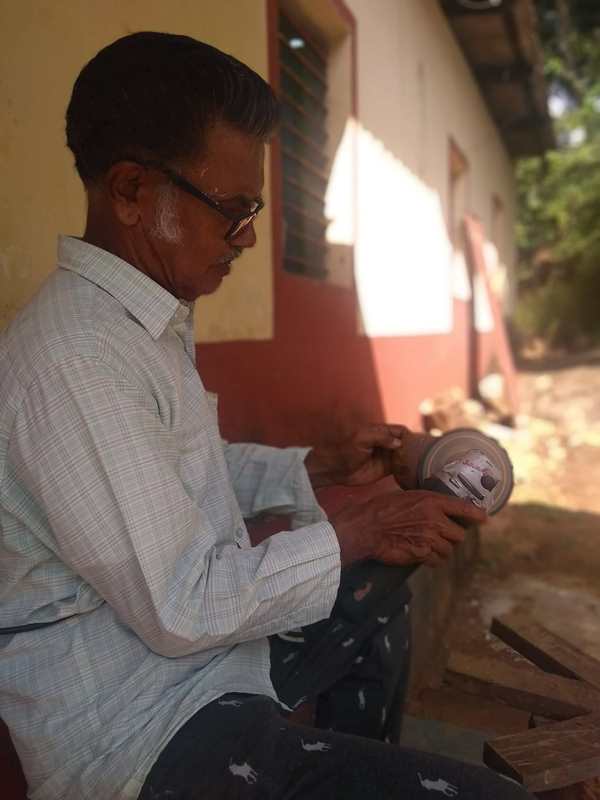 He has created hundreds of works of art from the time his journey with this medium began. Some are housed in galleries and clients’ homes. But he retains other pieces, as he says that these are his life’s work and he could not bear to part with them. He works on each piece for months depending on the size and complexity. He begins with a thought and then works with each shell smoothening it. The shells are glued as per design and come together as a work of art. He conducts workshops at MIT Manipal, Prasad Art Gallery in Mangalore and Alva’s college in Moodbidri. They are patrons who encourage the artist and help him continue working with his passion. He has created Mother Mary and Jesus, the Hindu Gods and Goddesses, but he loves to give form to poetic thoughts and philosophies. Poems by Kuvempu and PuTiNa have inspired this artist to create masterpieces based on their poems. A graduate in Science, some of his artwork deals with numbers and how we take our mothers form in one way or the other. I especially liked ‘Eureka’ which is about our brainpower increasing day by day and our body power on the decline. He is currently working on Calcutta Kali and she appears divine even in this raw form. I can’t wait for her to be completed. 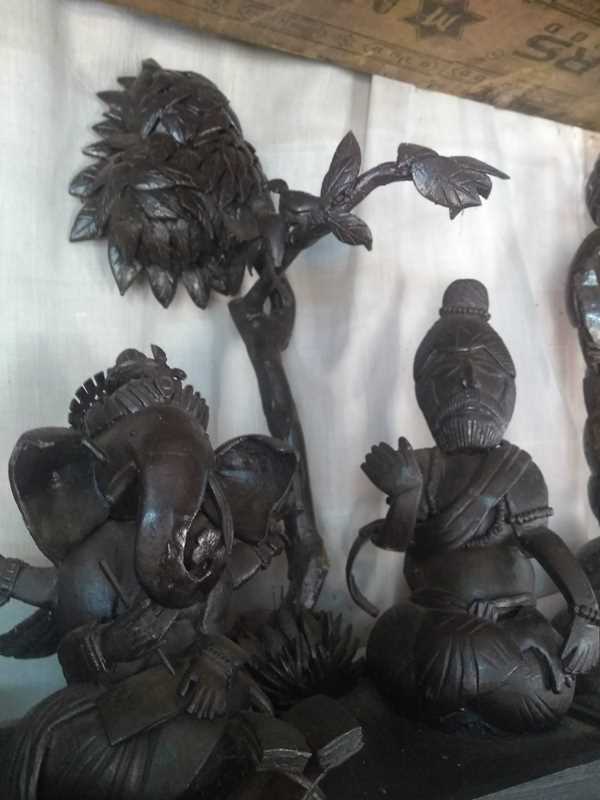 He recently created a 3 feat tall Kamala Krishna, the Lord who arises from the Lotus. Mr. Bhat tells me that visitors to his client’s palatial house would be mesmerized by the beautiful work of art. The client has now placed Kamala Krishna in the God’s room. He keeps repeating to me…Just imagine, it’s made from discarded coconut shells. But it is adorning a sacred place. God comes to us in all forms.

After all, it is this that an artist strives for. To see the thought created by him translate to a reality beyond his imagination.