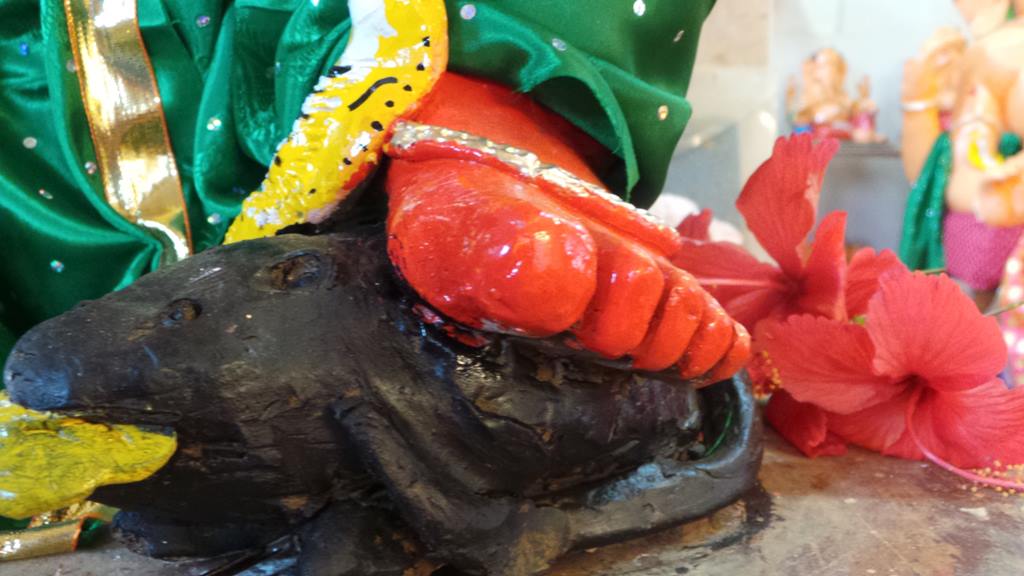 Creation Of The Ganapathi Idols- The Raos

I guess I am just lucky that I can write about some of my childhood memories and have the world read about it. After all, not everyone gets to play hide and seek between hundreds of Ganapathi idols getting ready for the big festival and celebration of Ganesh Chaturthi. The Rao’s home is next to my aunt’s place and today when I met them, RamAnna (Ramachandra Rao) recalls that my brother and I would jump across the compound wall to play at their house. The Raos have been making clay Ganapathi idols for 88 years now. And it’s not a one man show. All the members of the family get involved in making these idols. Not only Mohan Rao’s sons but also the daughter’s husbands and kids, their sons-in law, the grandchildren, everyone is involved. Each one is assigned a different role and together, they make not one but many beauties. 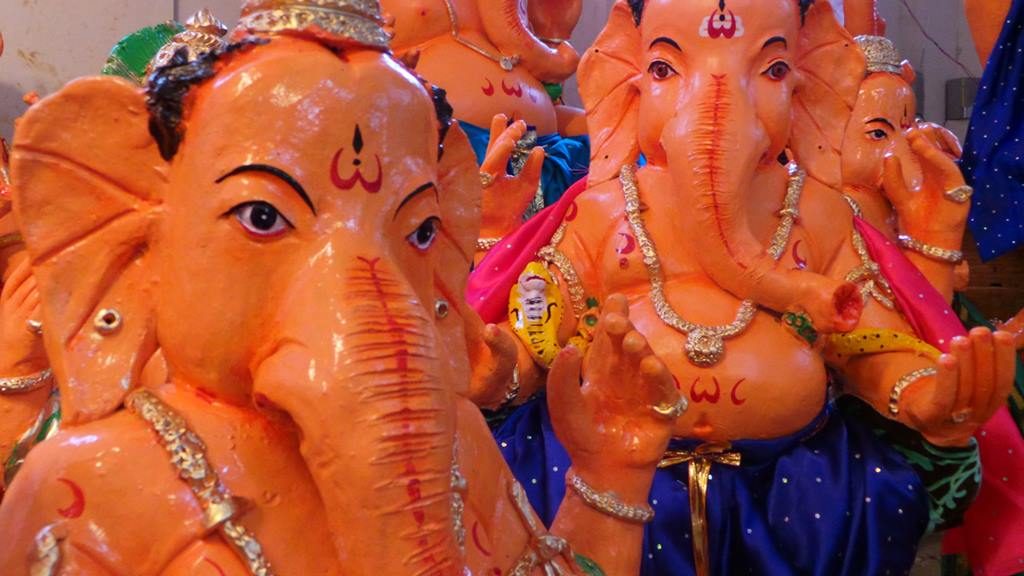 Ganapathi Idols in clay at Mangalore- The Raos family legacy

It all started with their father Mohan Rao (1895- 1989), who learnt the art of making Ganapathi idols in Mumbai. Ganesh Chaturthi is celebrated with a lot of enthusiasm all over India and also abroad, where Indians rejoice and celebrate it with a feeling of oneness. Ganapathi bappa, as the elephant headed God is called fondly blesses everyone.  Seeing their father work on Ganapathi Idols, the sons were inspired to learn and say that it was a way of life for them. Their father was 94 when he passed away during the festival preparations of Ganesh Chaturthi. Even the day he died, he was working on Ganapathi idols. Not artists in the technical sense, there is an auditor, entrepreneurs, makeup artists, an architect, a doctor and then there are the ladies of the house and the kids who join in after their day’s work. If we celebrate the festival for a day or ten days at the most, they start preparing for the festival two months in advance. Bal Gangadhar Tilak was the one who popularized the celebration of Ganesh Chaturthi as part of the integration of the nation in the Pre- Independence era. Even to this day the Samoohik (common or community based) Ganapathis bring the community together. In fact this time in Mangalore, I was able to attend the early morning celebrations with oil lamps arranged in the form of the Indian map before Ganapathi Bappa. The Bhajan Group singing the Lord’s praises and many others enjoying the melodies. This started early in the morning at 4.30 and concluded with breakfast for all at 7 am. In families, it is usually the ancestral homes where the Ganapathi idols are brought and pooja is performed as per rituals. All the members of the family meet during this day. 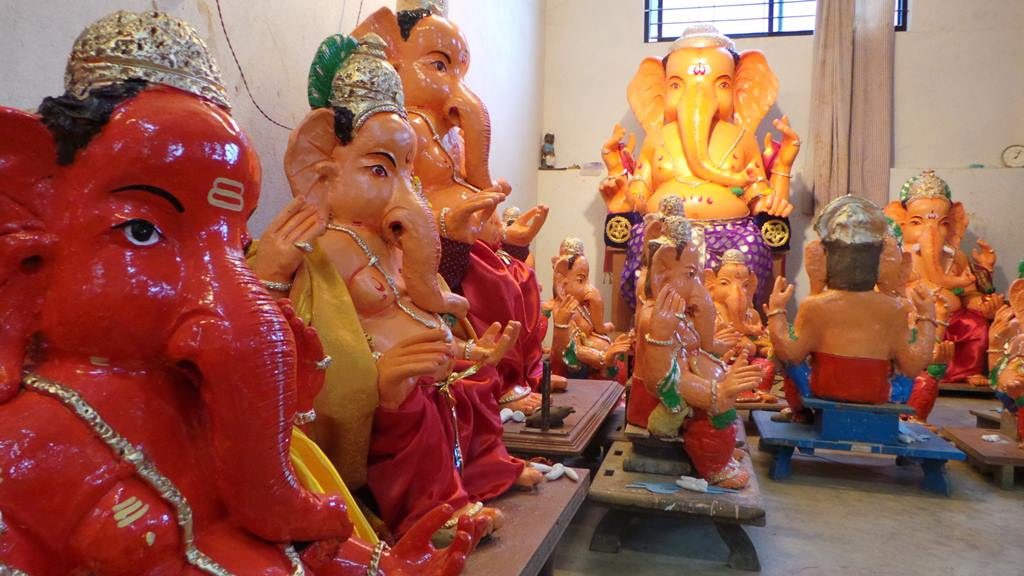 Ganapathi Idols in clay at Mangalore- The smallest to the largest at 8.5 feet

A platform in wood is dedicated to Ganapathi and this is given to the Raos two months in advance for the idol preparation. The star under which we are born rules us and so too the Gods. Lord Ganapathi was born under Chitra nakshatra (star) and that day, one of the peethas (platform) with a mound of clay is kept before the gods and the family seeks God’s blessings for the work that is to begin. The Raos believe that God himself inspires them and does the work through them. With this prayer, the work begins. There are no moulds and all of it is handmade. Preparing the base on the given peetha (platform), a stick measuring about half feet, is fixed vertically with hay tied around it. This gives the idol strength and support. After raising the body, the limbs are fixed after which the head is made and shaped.  After this dries up, the idols are painted and eyes are painted just two days prior to the festival. So the first time I visited, I captured some images and ensured that I reached two days before the festival to record the final images. The eyes after all are the most expressive and only then can we consider the creation to be complete. 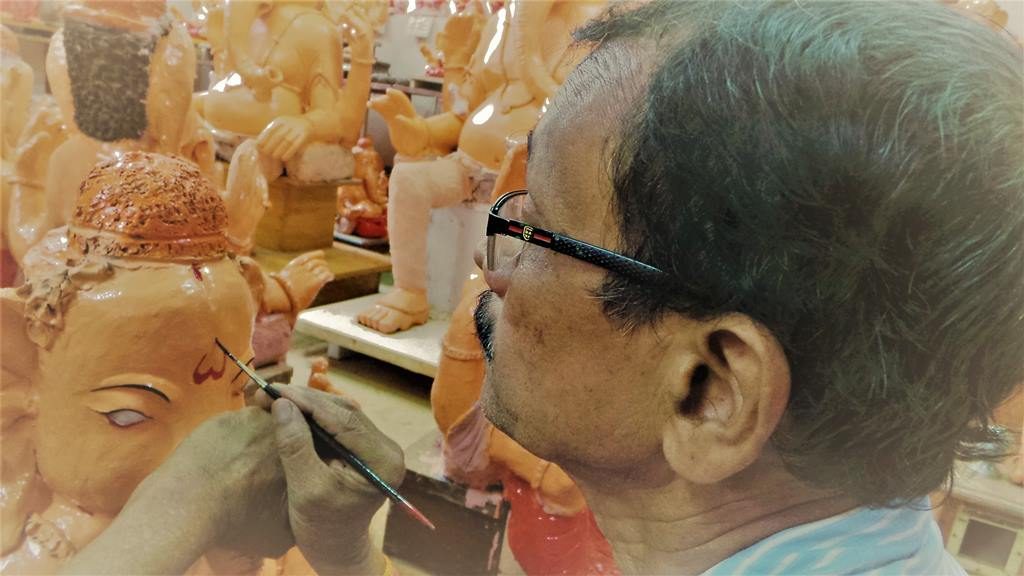 In the process of getting done. Ganapathi idols in clay at Mangalore

The idols range from the biggest idol at 8.5 feet (Sangha Niketan Ganapathi) to the smallest which is less than a feet in height. Though some idols are in different postures, the Raos are able to remember, which platform belongs to whose family and the posture of that family’s Ganapathi idol. All this becomes important as Ganapathi pooja is considered to be auspicious and once begun, should always be continued in the family. And such minute details hold a lot of importance. In spite of juggling their day jobs with this artistic pursuit and religious service with the pressure to finish in time, the best part is their happy disposition. They are always cheerful, welcoming and hospitable. And I usually see them during this time of the year. My aunt also says the same, “The best part is how well they work together, without any misunderstandings or tempers flying off the handle.” 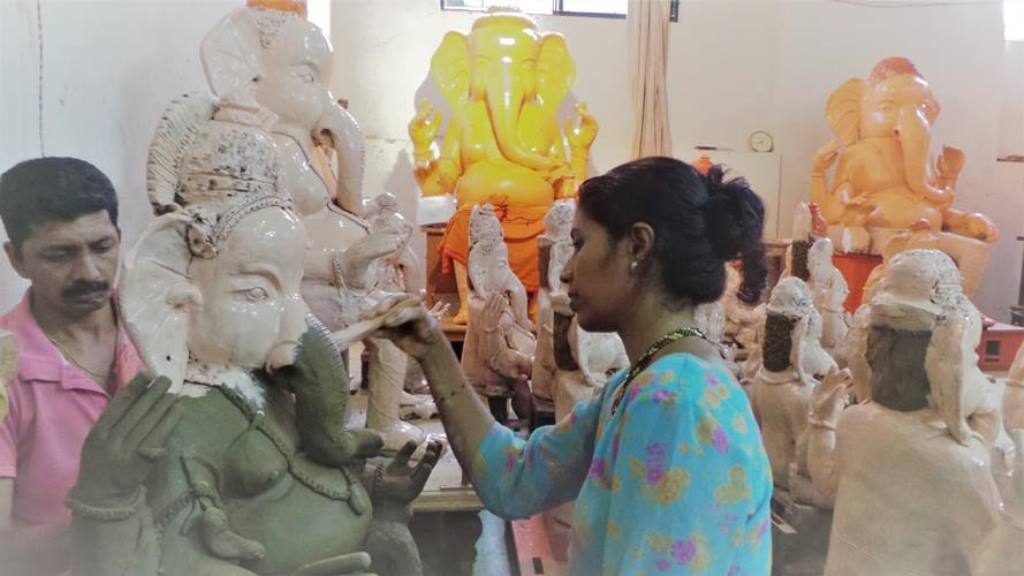 It is not for a fee that they do this. RamAnna (Ramachandra Rao) says, “We do this work with love and with a sense of service. It is not for money, though we are given a kanike (an offering) with a fruit as a mark of respect. And then people remember us during this festival. Even you would have just greeted us otherwise. But because we are doing this, you have come to talk in leisure today (he happily pulls my leg!) “. It was my lucky day as I got to see a couple take the Ganapathi idol (Ganapathi Bappa) home. The brothers reminisce that the lady who is now a doctor, used to come as a young child with her father. This is just so beautiful…where these bonds are formed with complete strangers and who can take you back to your childhood.  My first attempt at a video… 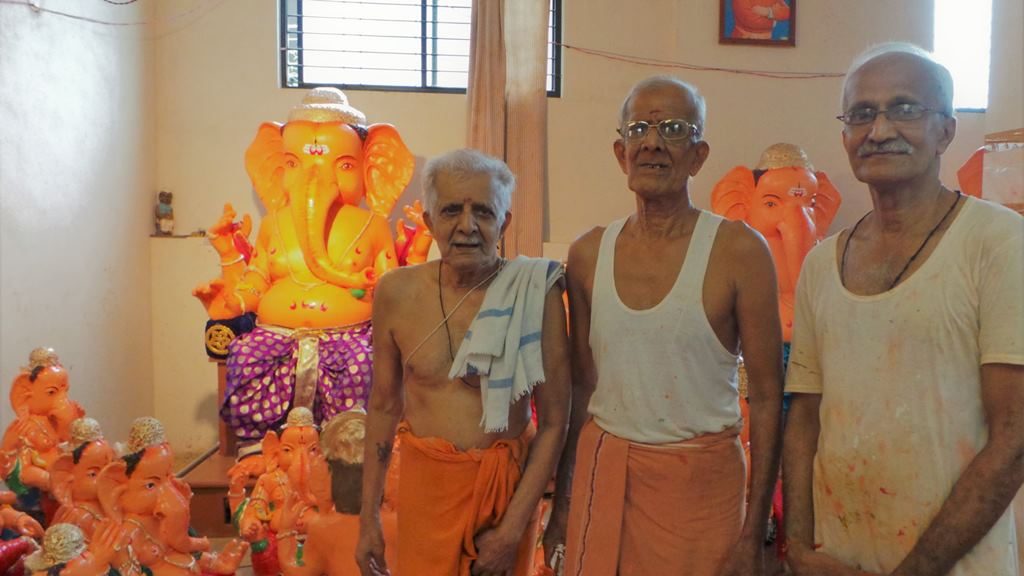 The three brothers. Busy at work. Carrying on the family legacy 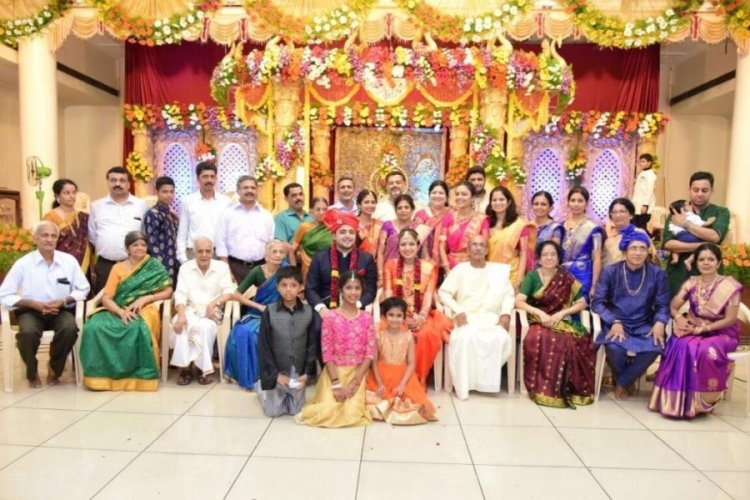 The Raos carrying on the legacy of Mohan Rao

The colours used are Asian paints lead free paints (And no, this is not a sponsored post) which are eco friendly. Of the total 202 Ganapathi idols, there is just one  Ganapathi idol here, without any colours. This is for Mangalore Fisheries College, and it has a unique appeal among all its other colourful contemporaries. Though this year there were a lot of videos with Sasya Ganapathi, where the idol could be immersed in a pot and used for plants, their time is yet to come. Until then let us enjoy these colours around us and rejoice in the festival spirit. 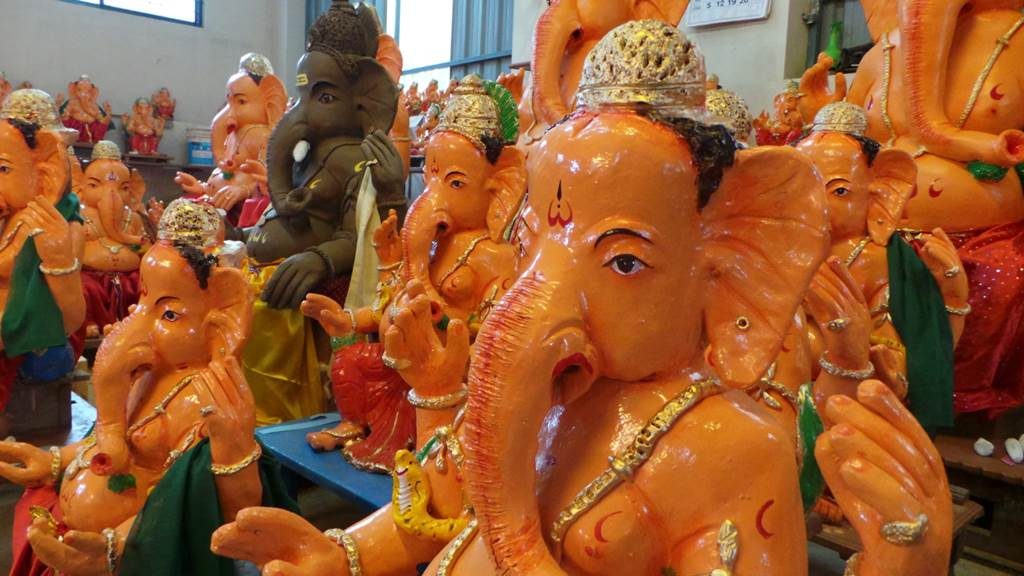 Happy Festival to you.

PS- I could not get all the family members together for a pic, so got this one where all the members involved are captured in a single frame.

This is in Mannagudda Mangalore.