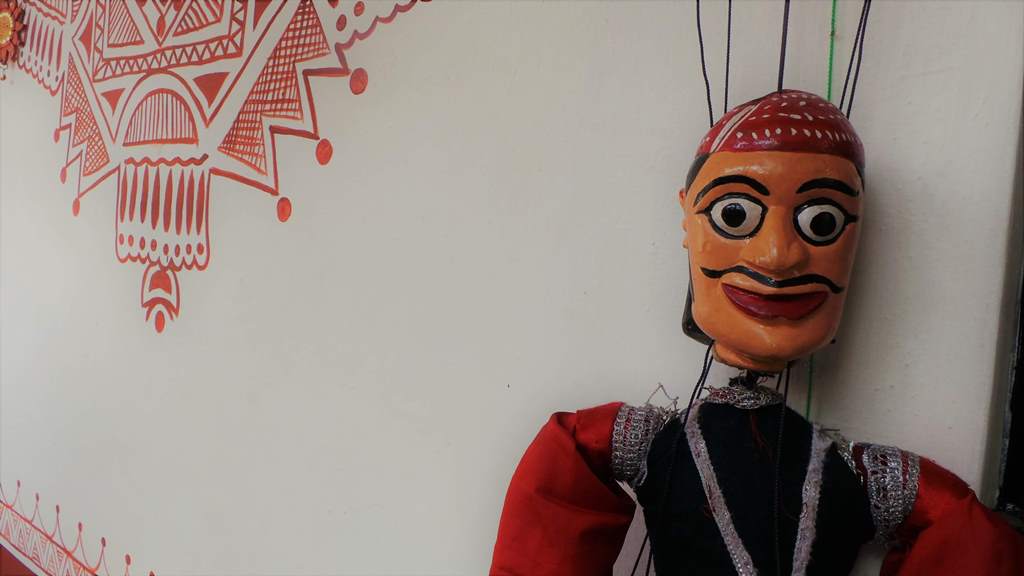 Looks like its Raining Puppets! After my post on the Puppet Making Workshop, I had an opportunity to see a Puppet show at Sankalpa School. I could feel their excitement in the air. They were all curious to see what it was that would enfold before them when the curtains were raised. As an introduction to puppets in India began and the curtain was raised on the Puppet Show, the kids burst out clapping. 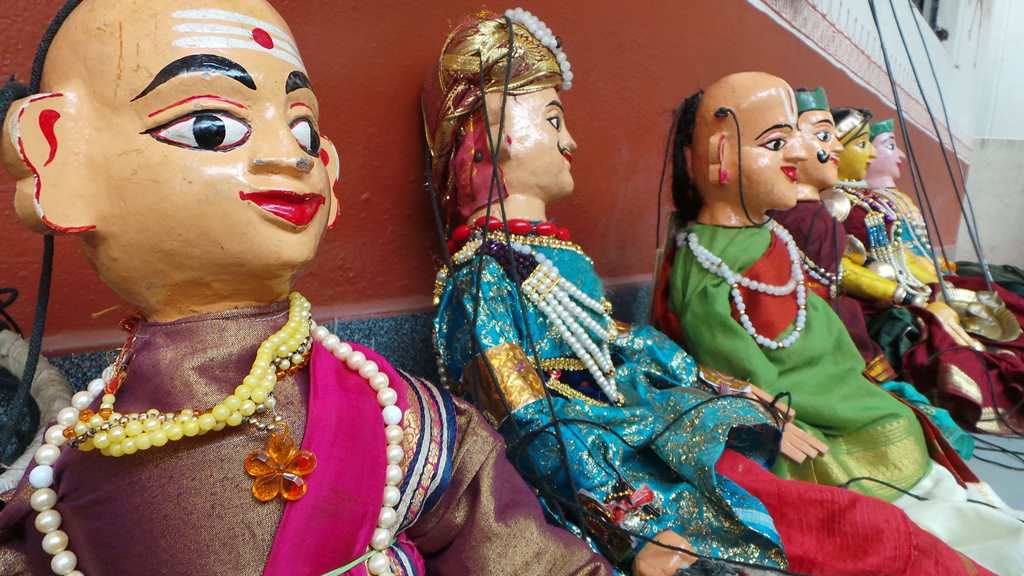 With the Ganapathi puppet seated on a pedestal, the other two puppets were singing and dancing, praising lord Ganapathi. Right from a burning aarathi for the lord’s pooja to the garland of flowers to decorate the Lord, it was as real as it could get. One of the puppets also brought out a placard wishing the children a ‘Happy Children’s Day’. The prayer ended with the two of them falling at the feet of the diety. Mr. Vijay, who is one of the sons of M R Ranganatha Rao, the legendary puppeteer tells me that the Ganapathi puppet in wood is more than 250 years old and has been in their family for generations. They use the ancient form of Mysore Rod Puppetry and also the string puppets. The puppets are all beautifully carved in wood and dressed resplendently. 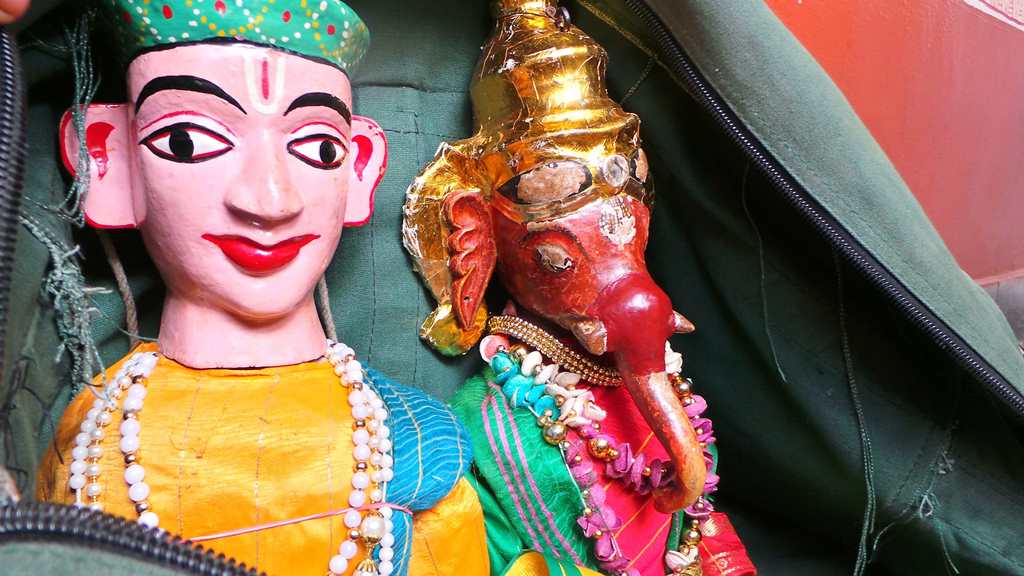 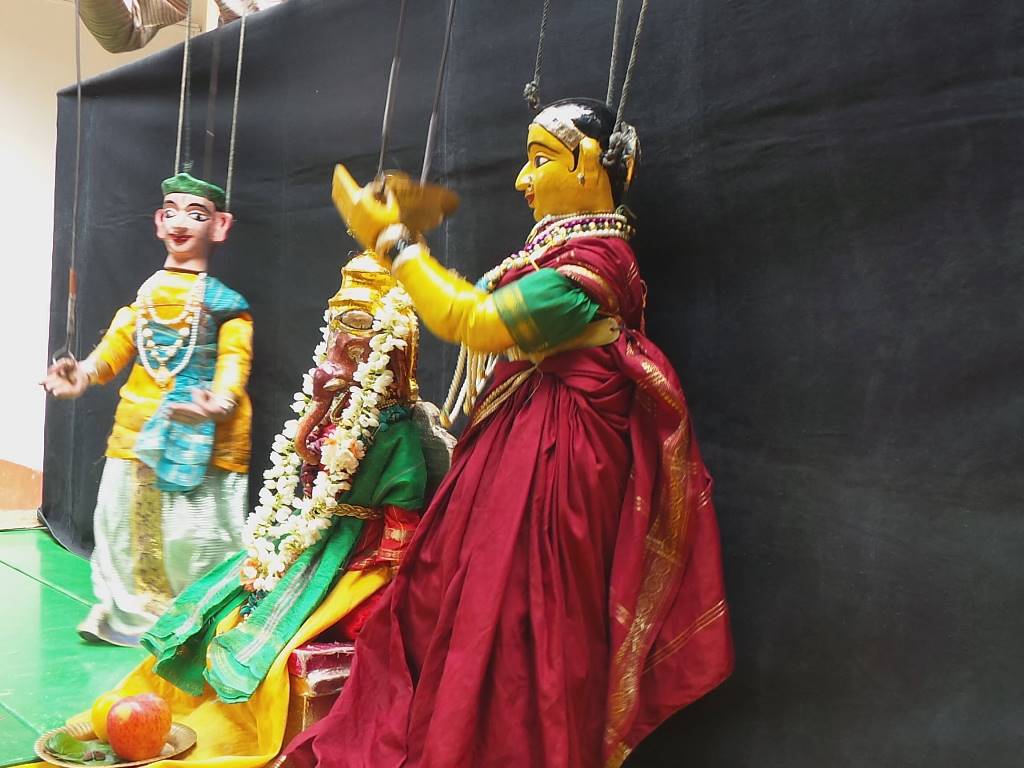 The Puppet show by Rangaputhali at Sankalpa- The Aarati used is quite real with the diya burning!

After the prayer, the children were introduced to the dandiya group of puppets. Let me tell you, they were the centre of attraction for the kids in the entire Puppet Show. This was a set of puppets all attached to one ring and the loop at the centre controls their hands. Believe me! The set is quite heavy, though the dexterity with which it was being wielded by the puppeteer, you wouldn’t know it. In fact when they winded up the puppet show, they took the puppets among the kids and all of them held the puppet strings and made them dance. When I was offered a chance, I immediately took it up. It was so much fun…but lots of muscle power too. 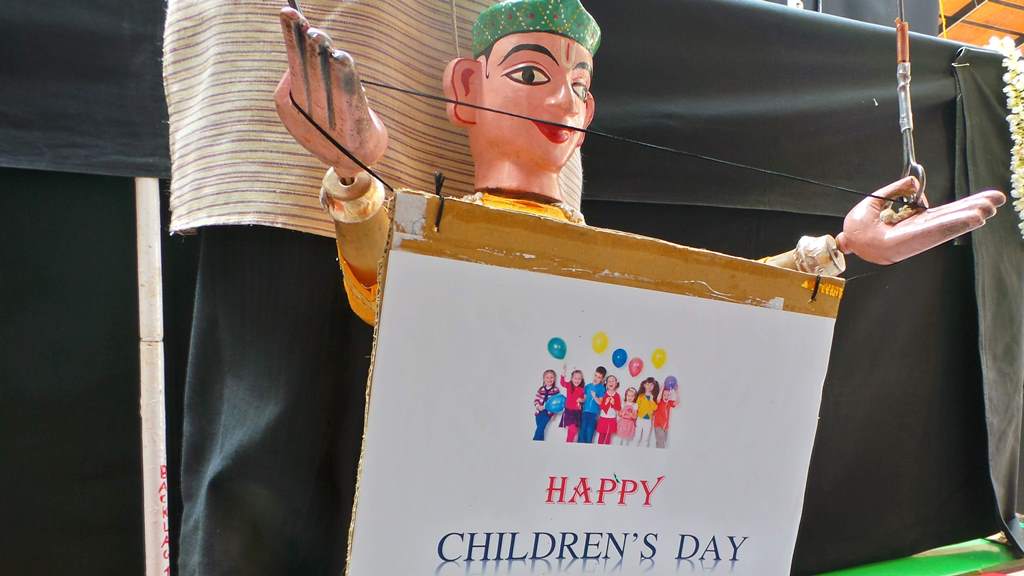 Then there was the snake and the snake charmer. Right from the dressing of the snake charmer to the snake in banares silk, it was an entertainer. In fact Mr. Vijay jovially brought the snake puppet out among the kids even as the show was going on…some were quite brave and didn’t flinch. I quite remembered my daughter…as we were watching Snow White on TV, I was in tears as the dwarfs were mourning for Snow White and my daughter says, “Why are you crying Amma? It’s not real!” Off course…Silly me! So these days kids are more alert to what’s real and what’s not! 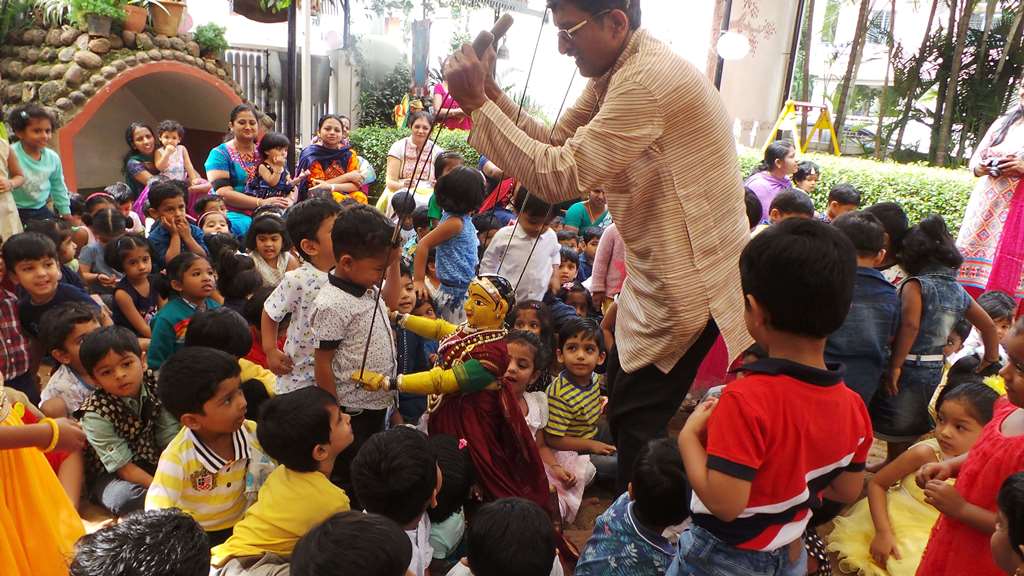 The Puppet show by Rangaputhali at Sankalpa- The Mysore Rod Puppet 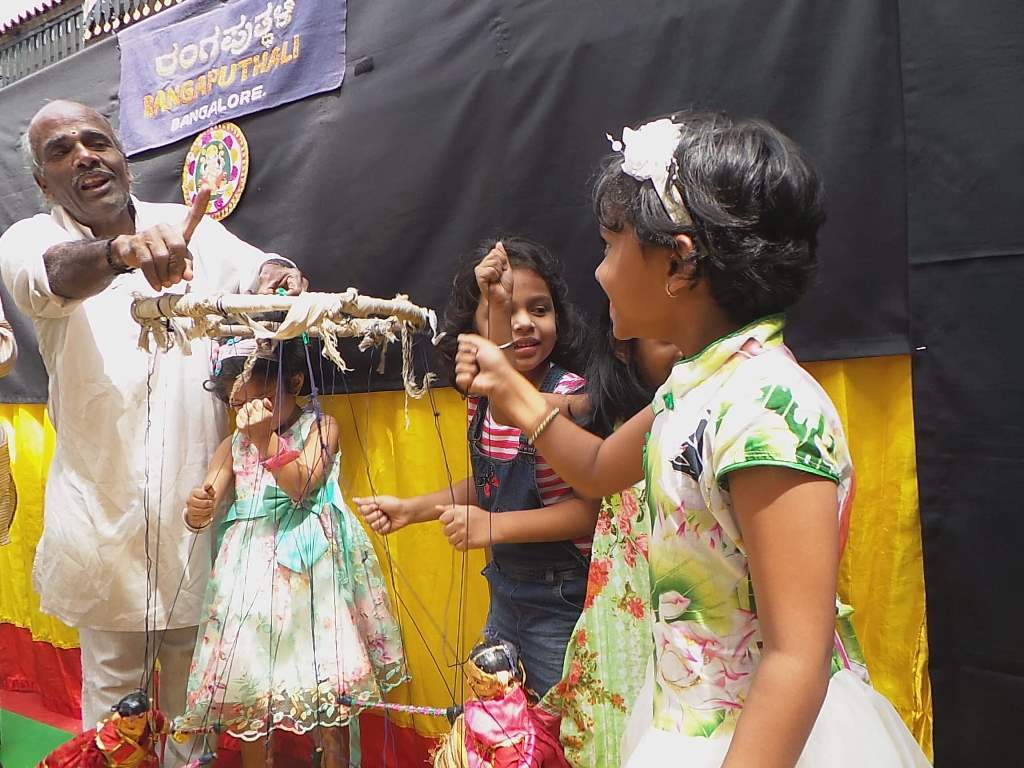 The Puppet show by Rangaputhali at Sankalpa- The Dandiya Puppet set 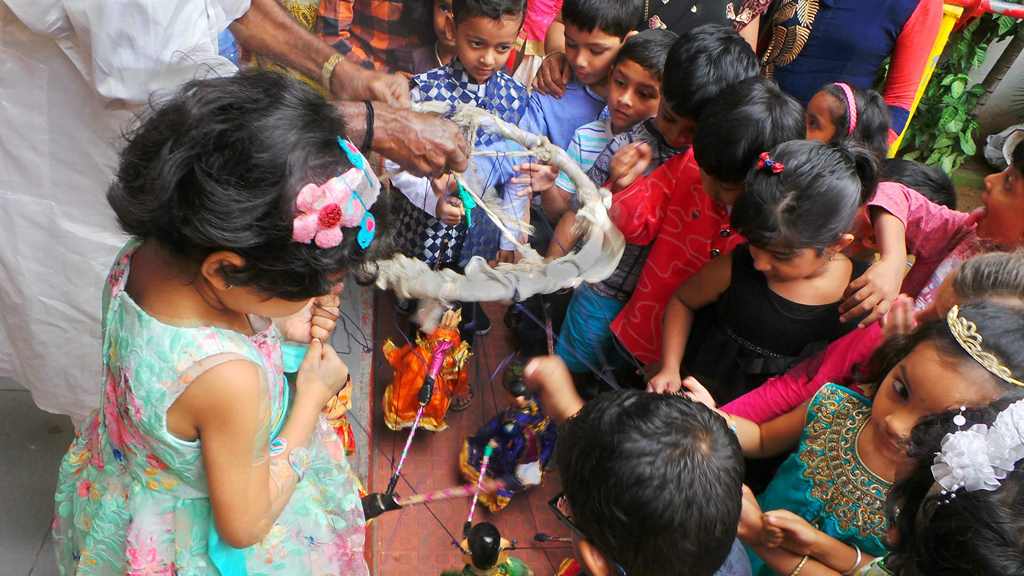 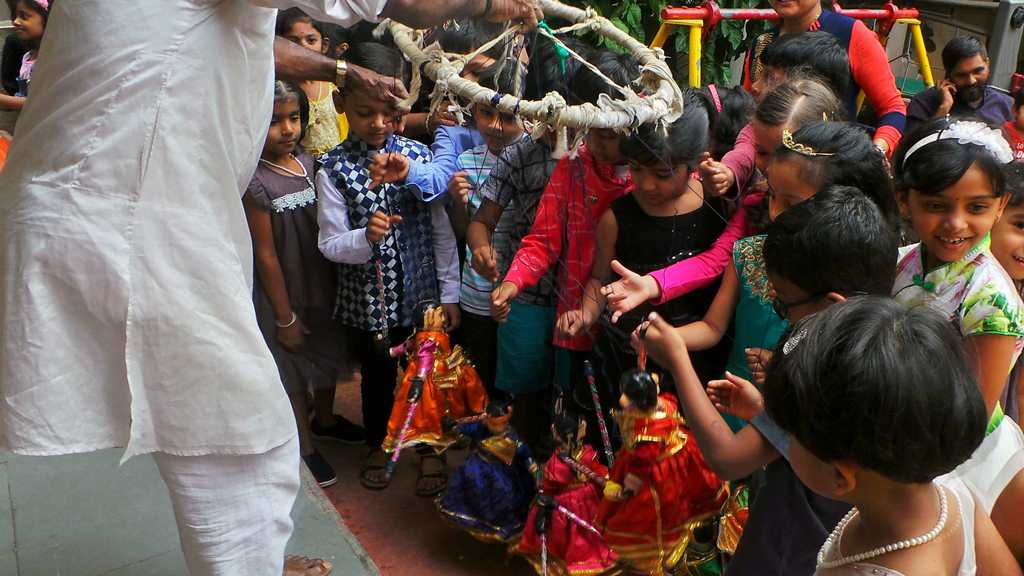 The Puppet Show also had a play on Tenali Rama and the king. For every dialogue, you could see the corresponding movement and body language of the puppet. It was the scene of the king asking the ministers to tell him the total number of crows in the kingdom and Tenali Rama cleverly says that they are as many as the majesty’s hair. When the king asks for a number, he gives a random number. But the king is not satisfied and says that he will have them counted. To which Tenali Rama replies that if they are found to be less, the crows would be visiting their relatives and if more, then the neighbouring crows must have come for a visit. With this the whole court bursts out laughing and so do we, as we remember this story. The Puppet Show is a beautiful way to remember these stories which lie forgotten in our own childhood. 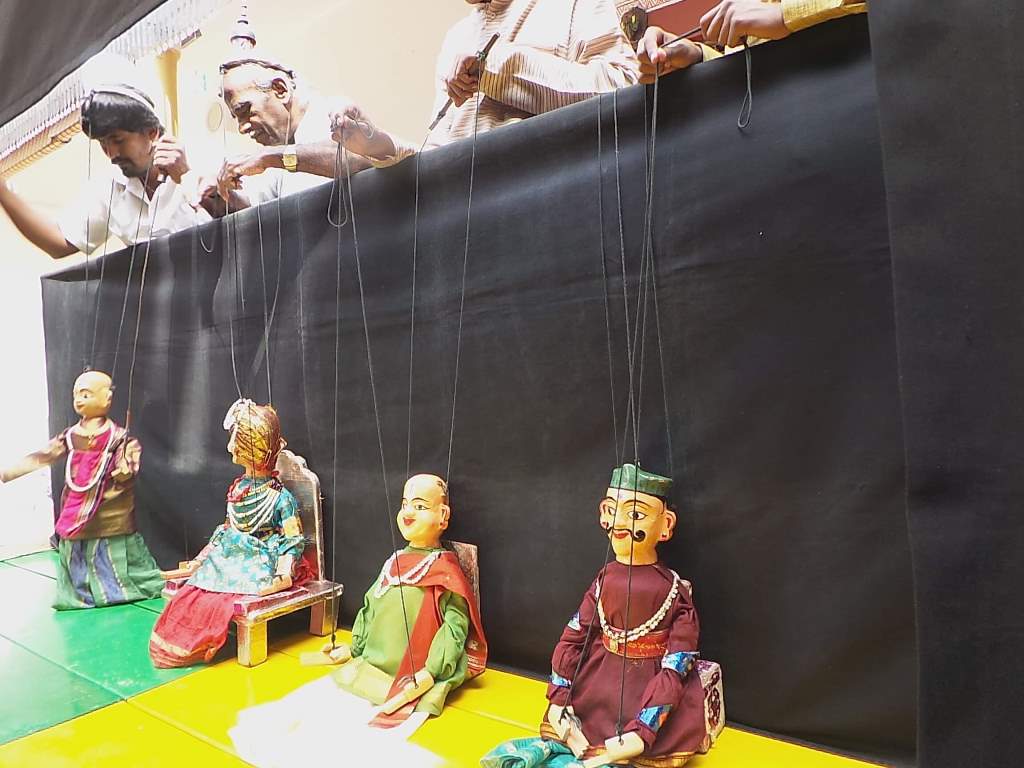 The Puppet show by Rangaputhali at Sankalpa -Tenali Rama

The Puppet Show ends on a joyous note where the stage setting is removed and the puppeteers join the kids for a dance along with the puppets…some of the kids being as big and some smaller than the puppets! 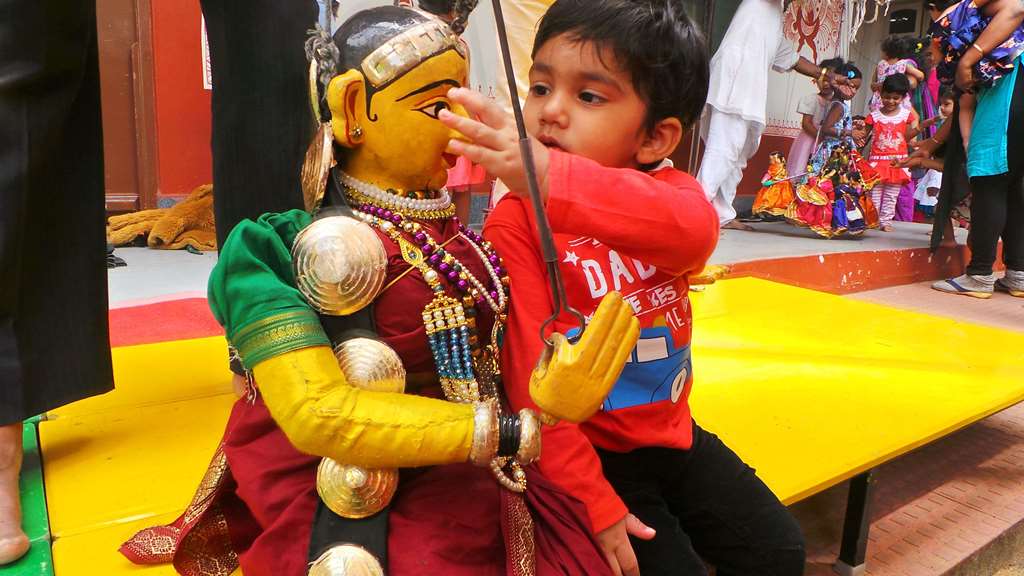 The Puppet show by Rangaputhali at Sankalpa -The child was smaller than the puppet!

It was a lovely thought to have the kids see something as special as a puppet show. In this day and age where there is no dearth of entertainment on TV and tabs, it becomes important to expose this generation to the only entertainment that the earlier generations had. If not for our encouragement and patronage, this art will surely not survive. Sankalpa Montessori school is definitely doing a great job in encouraging the artists to continue the legacy. Kudos to the school and Rangaputhali for continuing the legacy of puppets which began with  M R Ranganatha Rao. 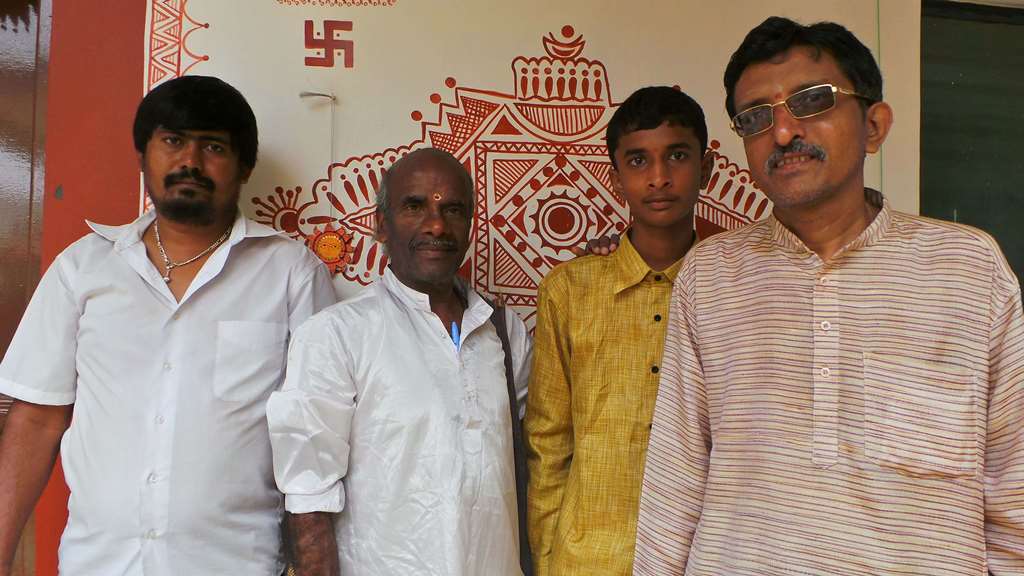 More on Rangaputhali and the making of these puppets in another post! In the meanwhile they can be contacted at globalpuppetry@yahoo.com or 08022428313 for programs and puppet shows.

Hope you enjoyed the show. The video will be uploaded soon on this show.

Have a great weekend.