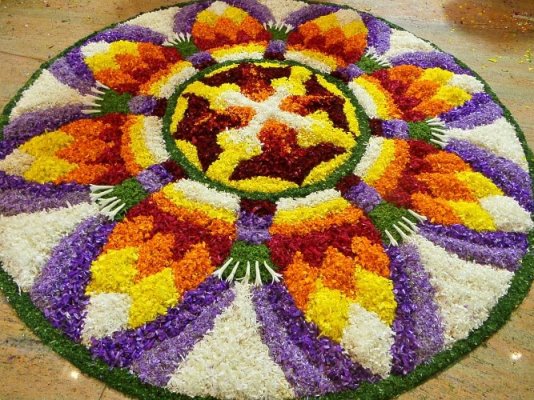 The colours of mother earth and nature

The greens, reds, oranges and yellows

All so fresh and clear

I take my time and linger

In the garden and the yard

It is that time of the year

That is so dear… 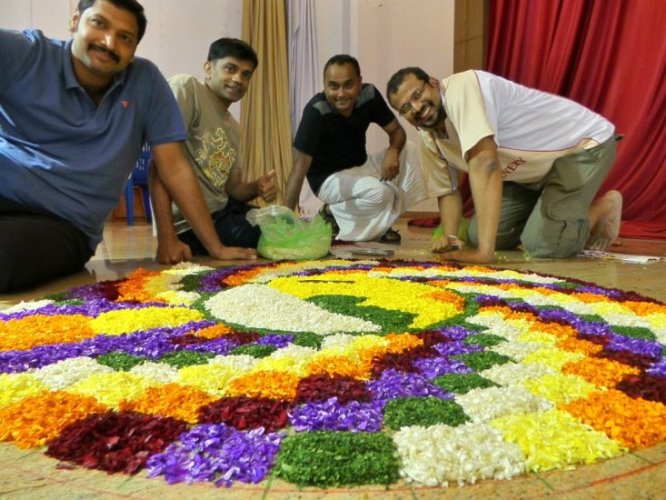 According to the Malayalam calendar, Chingam is the month of Onam. The time of rains, harvest, boat race, fresh flowers, great food and the return of the great king Mahabali. And to welcome the dear king, the subjects decorate the front yards of their homes with the Pookkalam (also called Atthapookkalam), which is the flower carpet. Onam begins with the Hasta Nakshatra (star) and the last day is Thiruonam, which is the tenth day. When one of my friends posted pictures of Pookkalam with a base of mud, I was surprised. This was the first time that I had seen such an arrangement. I was under the impression that what we see in the cities with just the flower petals and leaves was how the pookkalam was done. This got me to check with friends from Kerala and find out the Pookkalam as in the yester years and also rural Kerala. And this was what I found out.

In the earlier days, cow dung would be applied to the front yard to keep it clean and dust free (this was before the tiles). Its anti bacterial properties also acted as a dis-infectant. During Onam, before decorating the front yard, it would first be cleansed with cow dung. After identifying the place for the Pookkalam, which was usually near the sacred Tulsi, one layer of cow dung would be used as a base. After the base was prepared, cow dung was placed in a cylindrical form. Traditionally, the flowers and leaves to be used for decoration are also laid down according to the day. On the first day, tulsi and tumba flowers are placed in the centre. On the second day, which is the Chitra nakshatra, the flowers from the earlier day are replaced with tulsi, tumba and mukkuthi. Tulsi is not only a sacred plant, but its leaves have a sweet aroma. Only from the third day onwards, which is the Swathi nakshatra, red flower petals are used to decorate the arrangement in circles. With each day, the circles of flowers extend. Ixora (chethi), Shankhapushpa, marigold, globe amaranth (Vada Malli), crape jasmine, hibiscus, red pagoda flowers, mandaram are some of the flowers used in the decoration. 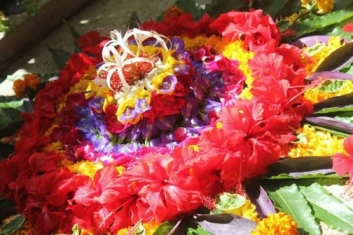 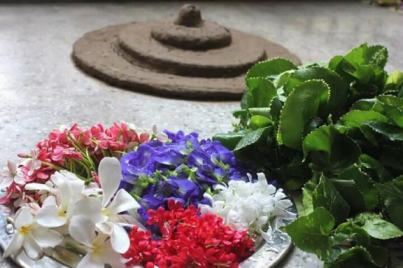 Pookkalam with a base in mud. Pic Credit- Ms. Rema Kumar

On the fifth day, after removing the old flowers, the base is made with mud and water. The centre is elevated and this base is called ‘Pooppada’. After reinforcing it, cow dung is spread and a strong twig of the kavungu(arecanut) tree is used as a support for the plantain stem. This is used from the fifth day onwards. ‘Kuda’ is prepared using ‘eerkil’ which is nothing but a fresh stick from the coconut leaf. Red and yellow flowers are stringed onto this and the number of such arrangements increases every day. The flowers would be at their maximum on Uttaradam, the ninth day. 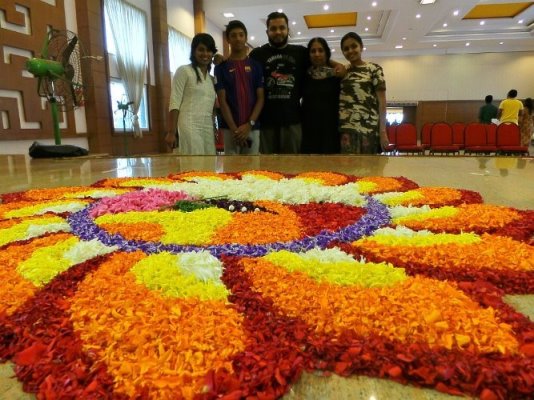 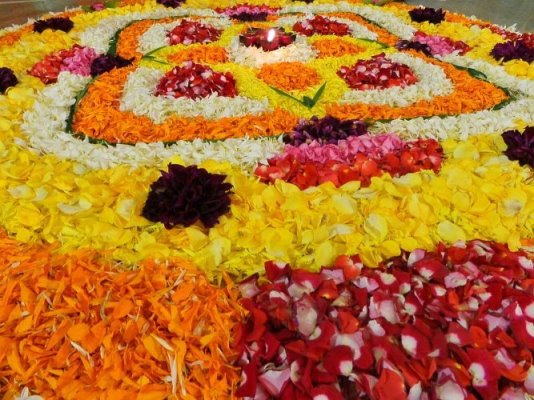 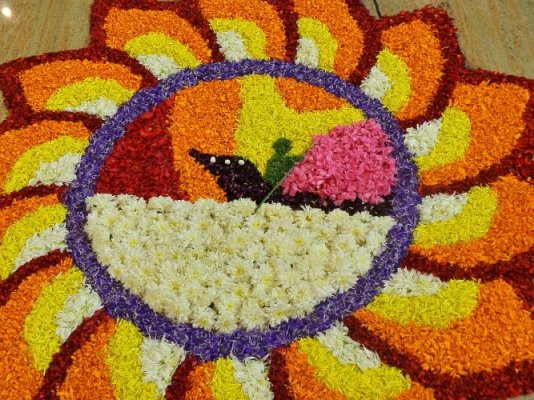 On the tenth day, the thiruonam, the arrangement is decorated with tumba leaves and paste of rice flour. Flowers are not used. Instead of flowers at the centre, Vishnu and Mahabali are represented in shapes made out of mud (clay idols) decorated with flowers on top. So this is how it is supposed to be done. But in this fast paced life, it becomes difficult to celebrate a festival in its original form. We adapt, realign and create new expressions for the old forms. With this we have the Pookkalam in its current avatar (I saw many Pookkalams at ECA Bangalore for the Onamotsav), which is just as dear to us as the old one. For it is made with just as much love and patience, as the old one. So let us celebrate the new and remember the old. To Pookkalam and all the joy it brings us. 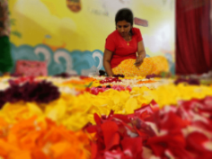