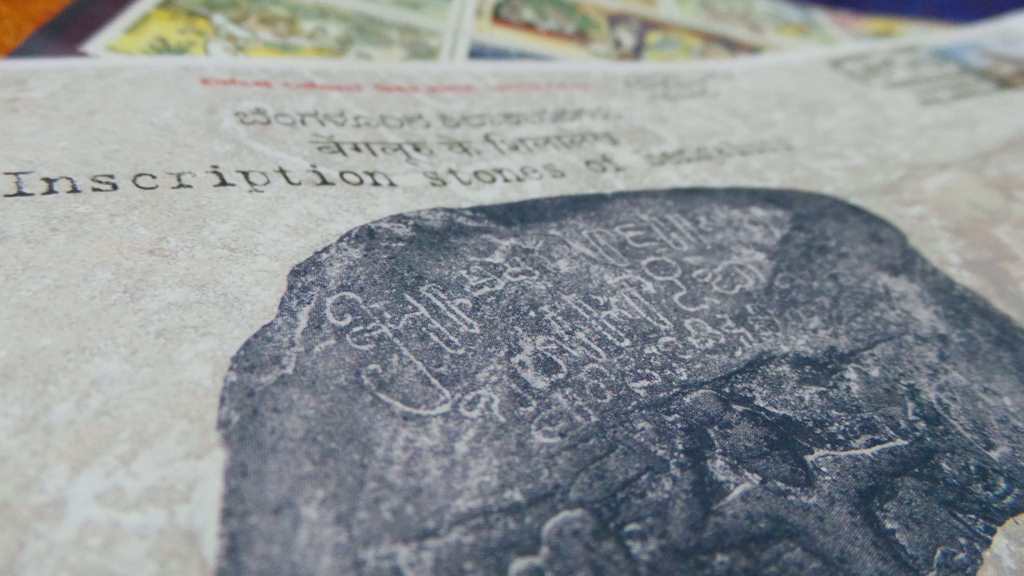 Old inscription stones of Bangalore -At first glance, you would think they were illegible and in a language not known to you. But on closer inspection of the pictures you realise it’s in Kannada. Of the 150 (Only within Bangalore) recorded by Mr. B L Rice from 1894 to 1905 in Epigraphia Carnatica only 27 are in existence now. Mr. Uday Kumar an engineer by profession started looking for these stones when he heard of one such stone in his vicinity in Rajajinagar and was disappointed as he did not find it. But he did not give up and went in search of the other inscription stones. When he discussed this with his cycling buddy, Mr. Vinay Kumar, he volunteered to be part of the project. In their words, “What started as a conversation ended up as an exhibition.” With each of these stones, there are stories. Stories on how they found it or didn’t find it, the condition they found it in and the stories on these stones. 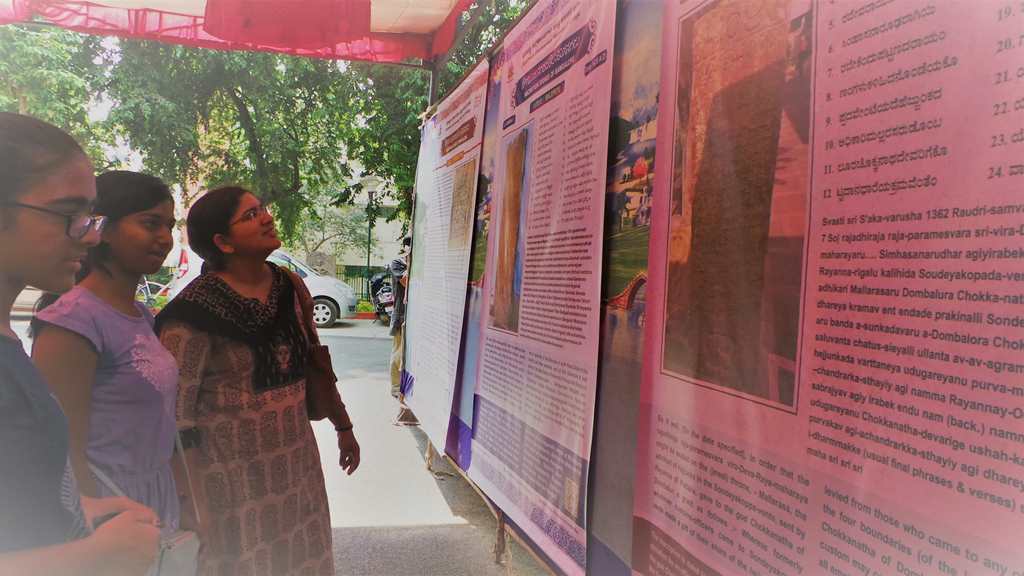 What is the purpose of this exhibition of inscription stones of Bangalore? I was expecting the inscription stones to be at the museum but was surprised to only see their pictures. If the intention is to preserve these, shouldn’t we just keep them in a museum? So many questions and all of them are answered here….in the stories you hear from Mr. Uday Kumar and Mr. Vinay Kumar. 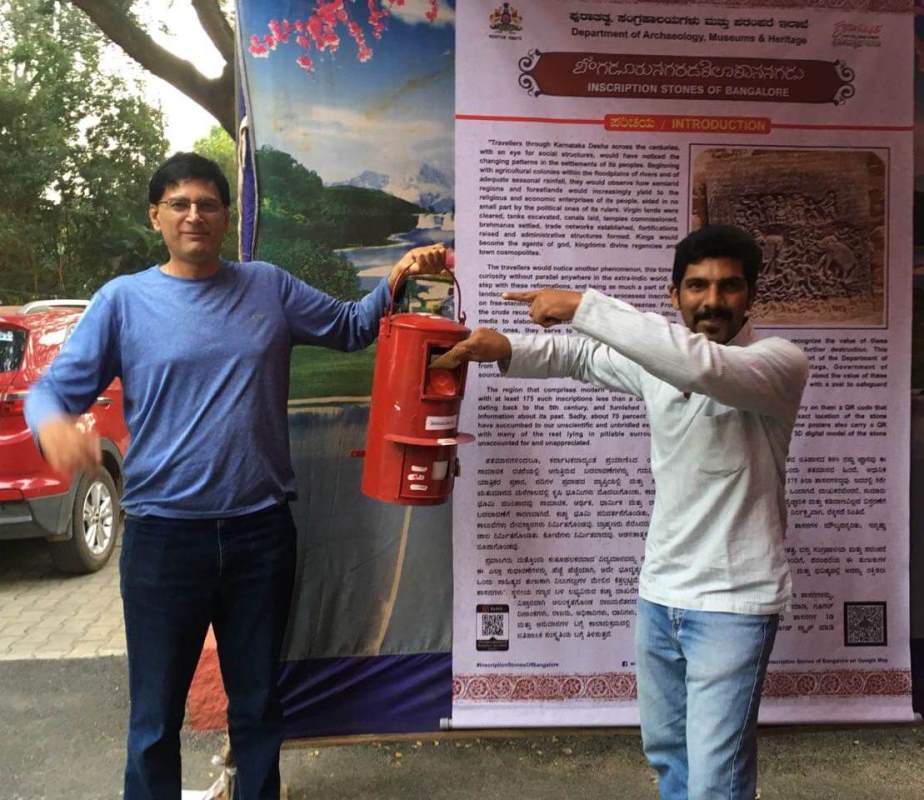 I especially liked the story of Chikabettahalli and the new found pride of the localites in their place of birth. Where urbanisation has brought Vidyaranyapura to the forefront, kids from Chikabettahalli might rather say they are from Vidyaranyapura. But now when they have realised they have a stone inscription from 1524AD mentioning their place and the history, it is a matter of pride for them to belong here. 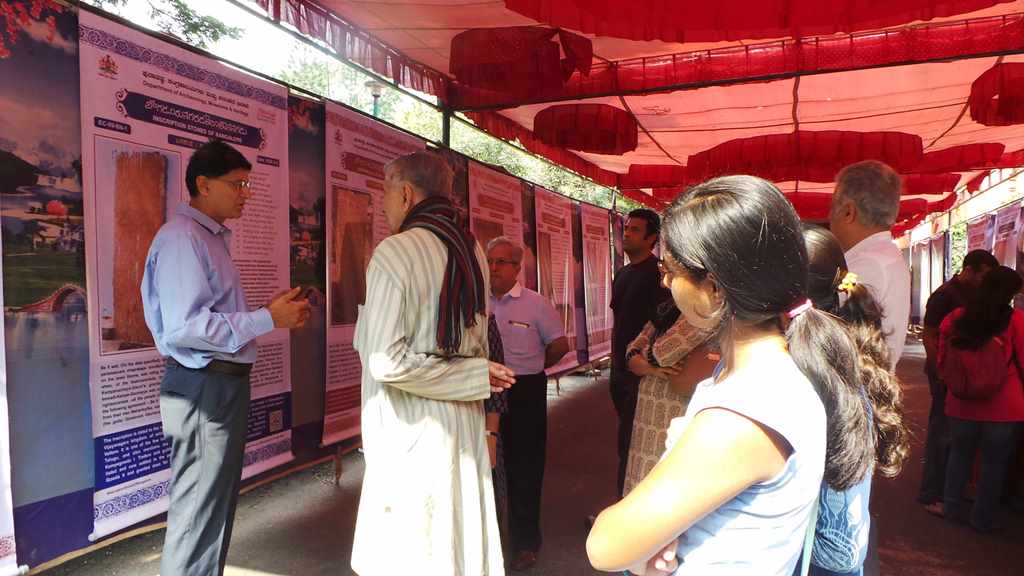 Inscription Stones Of Bangalore -The Old and young

A broken stone– It speaks of our lassitude where our history is concerned. Leaning against a temple wall, painted a brick red to match the temple and burning leaves against it, the stone finally broke down. You can see this inscription stone at the museum or rather whatever is left of it. These inscription stones of Bangalore also play an important part in language study and give us an understanding of those times. 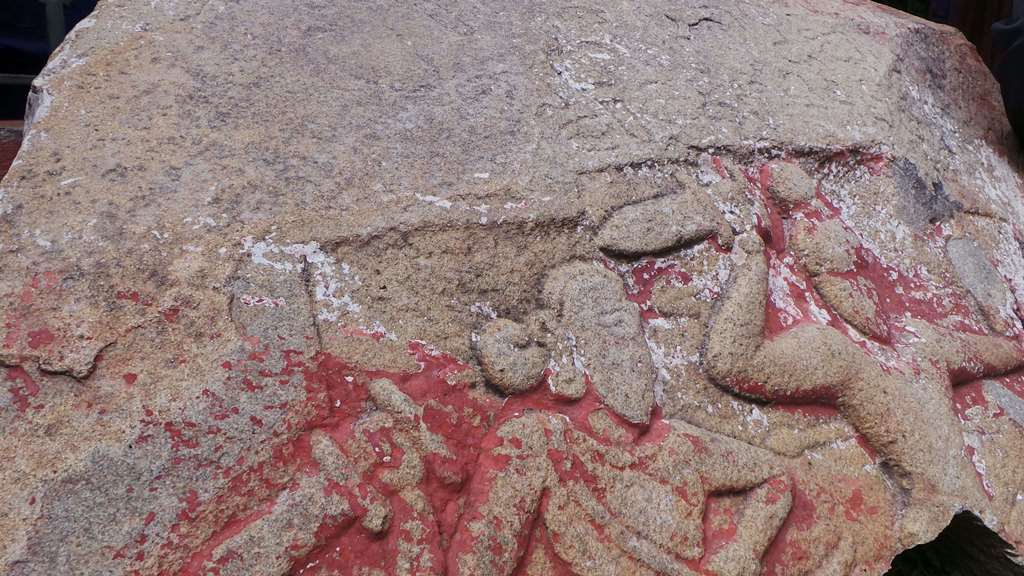 The story of the shepherd, who did not know the stone was in any way special. But when Mr. Uday Kumar told him about its significance, he has taken ownership and now explains the significance of the stone to all who come to see it. The story of the priest who does not understand the language but has his family tree traced to the stone inscription and takes good care of it. The stories are many and are best told by Mr. Uday Kumar. With their interest and efforts, Mr. Uday Kumar and team have brought about enormous change in how we see our history and feel about the place we all call home, Bengaluru. 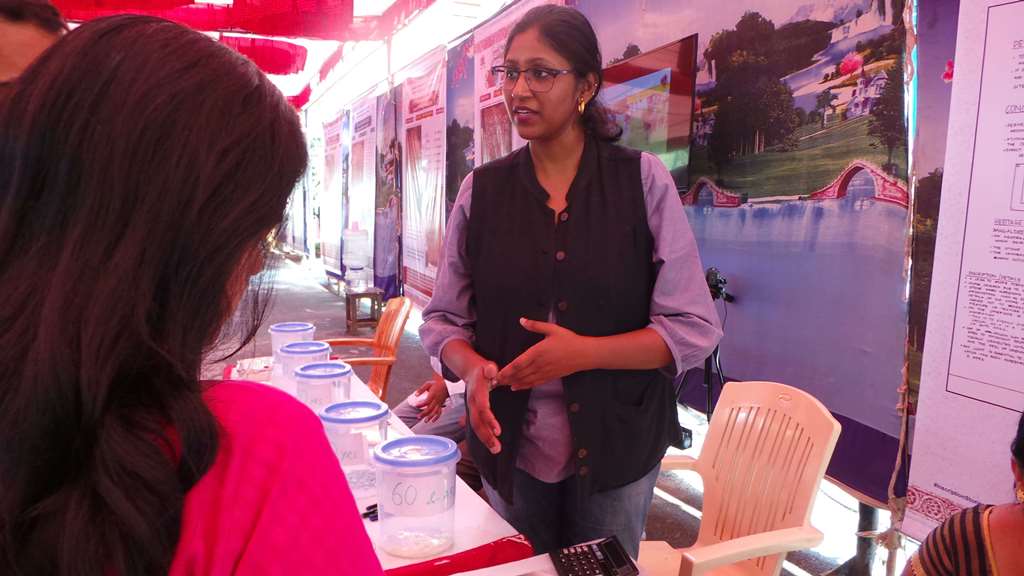 This is a crowd funded program, supported by the archaeological department and the government. But more importantly it’s the culmination of the work and efforts by Mr. Uday Kumar and team. Beginning this August, I doubt they have taken any holidays. Working at day jobs as engineers, they have given all their spare time to this project. And the engineers that they are, it’s been beautifully presented with the sole purpose of creating awareness and pride in our history. They also recieved support from across the world with all the different aspects of the exhibition on ‘Inscription Stones of Bangalore’. 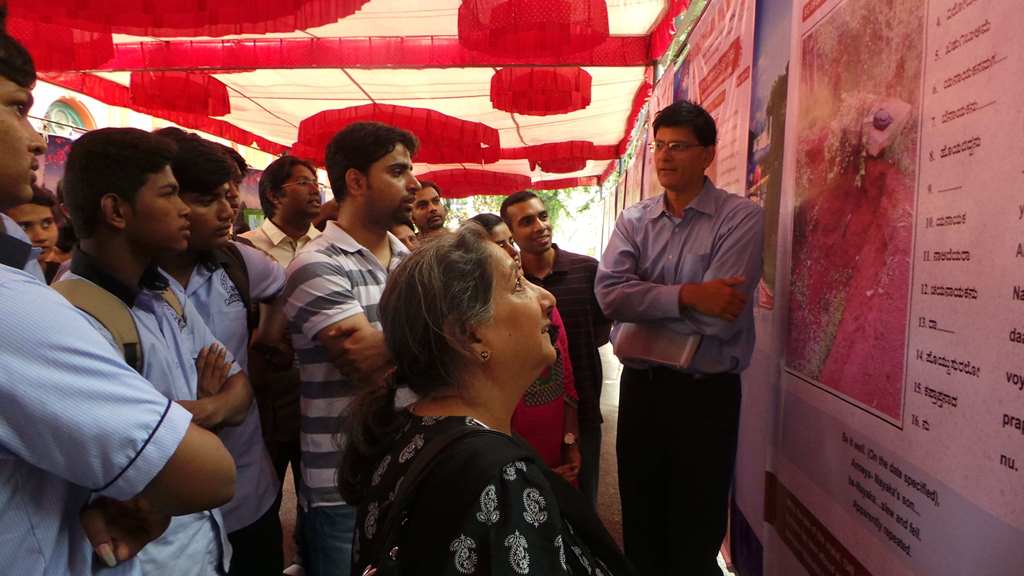 The inscription stone dated 900 AD found in Begur near silk board has the first mention of Bengaluru. So Bengaluru is older than Kempegowda…there’s proof. There’s also proof for the cosmopolitan nature of Bengaluru from as far back as 1350AD, where Kannadiga kings had inscription stones done in Telugu and Tamil to facilitate the local population. You can also see the method in which such inscriptions were understood. The paper used to record the writing using water and paint was demonstrated by the archeology department and is kept as part of the exhibit. 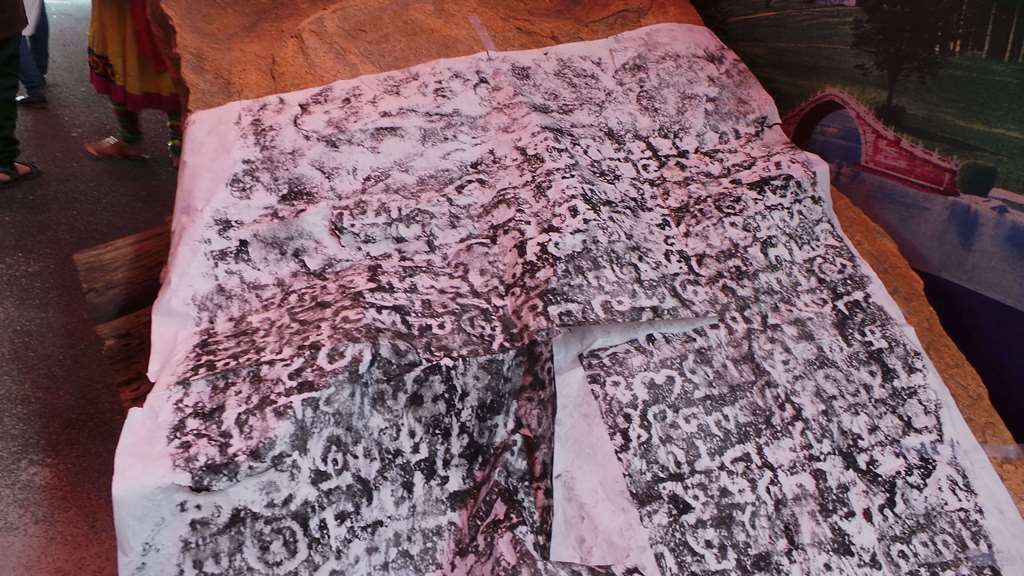 Children will also get to take postcards with the history of the stone inscription and a special cancellation seal which the postal department has come up with featuring the name Bengaluru as on the inscription stones of Bangalore. My child was totally excited about posting the postcard to herself. Unfortunately we were so engrossed in the process; I did not click any pictures (This reminds me that she has no idea about letters, the post office and the post box! She thought it was like a temple hundi!) Just shows that in this digital age we need to make efforts to teach them something that we took for granted...the post office in our neighbourhood. 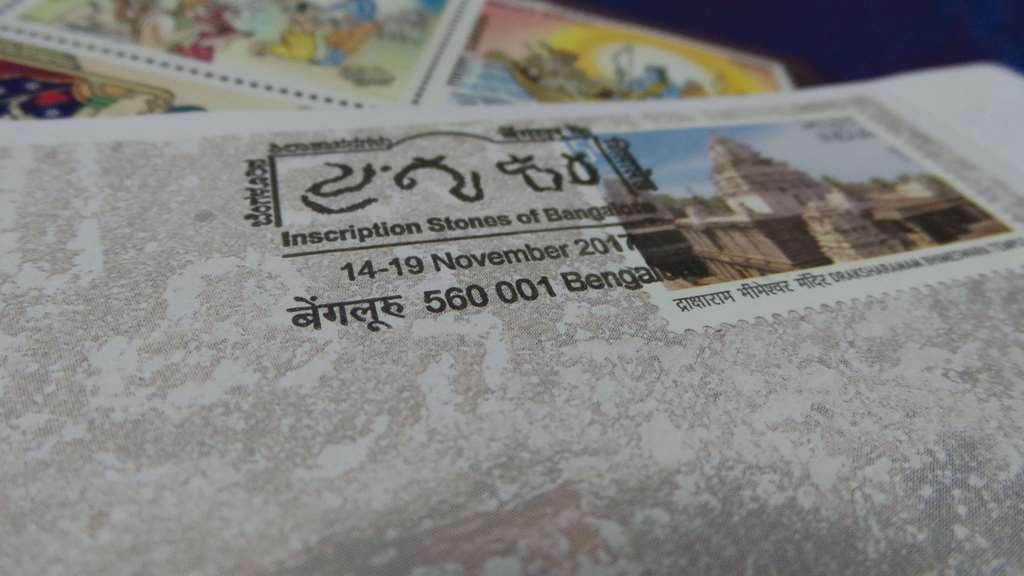 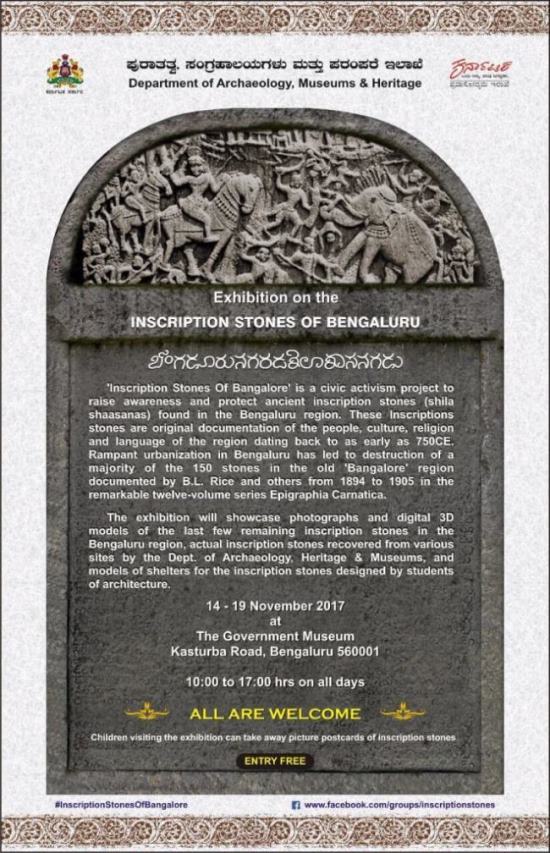 Inscription Stones Of Bangalore. Pic Credit- Invite to the Exhibition

These ‘Inscription Stones of Bangalore’ make our history…history is not in our textbooks but derived from these stones. Just like the drawings on caves helped us unearth the roots of our civilization, these stones are witness to the times gone by. They tell us of traders who donated to temples and so exempted from paying taxes in return (Tax was a pain point even then!), of brave hearts who lost their lives (Veeragallu or herostones), of kings who conquered and rewards received….Let us give them our Sunday…listen to their stories from those who have been with them and understand the times that these stones come from.