An Introduction to Yakshagana 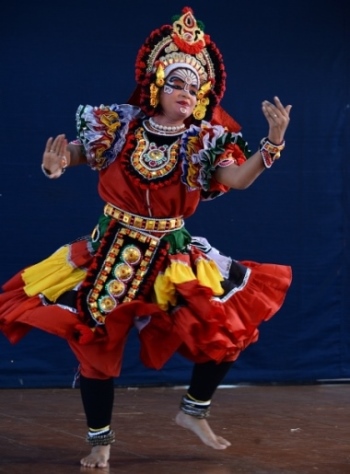 When I started with the idea of stringsofheritage, I was assailed by doubts. And then some days I was very optimistic. With a lot of festivals coming up( This was during Ganesh Chaturthi) and no blog posts on the horizon, I again wondered what I was doing!!! And as we chit chat about sarees and life, I casually ask my co-sister who is a doctor, “Do you know any ‘yakshagana’ artists I can speak to, during these festival days? I want to do ‘An introduction to Yakshagana’ post.” Up she jumps and says, “Off course!! My colleague Dr. Manjunath Shetty is just the person.” Off we go to the government hospital. It’s an emergency appendix operation for which he has come, inspite of it being his off duty day. He is a surgeon, an expert in surgeries and also the administrator at Bhatkal Government hospital. When I meet him, I sheepishly admit that I don’t know the ABC of Yakshagana. I was worried quite unnecessarily. He was happy to talk to me about his hobby, that which gives him a lot of happiness and satisfaction. 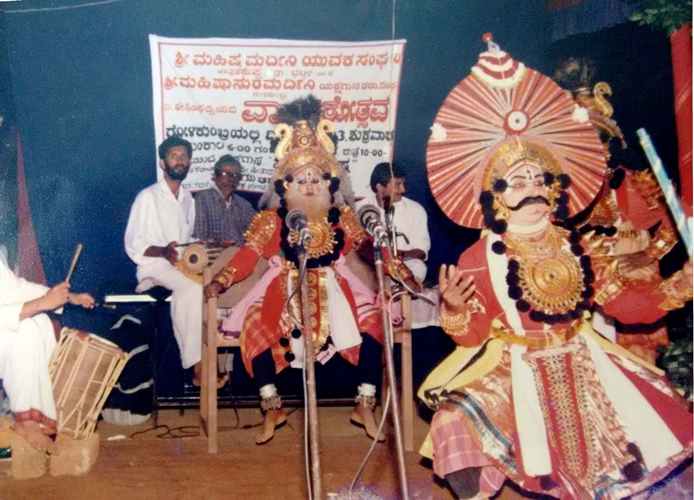 Dr.Manjunath Shetty as Karna in a Yakshagana performance

I ask him about how it all began for him and he recalls his school days in Kundapur, when he used to bunk the second half at school and go to learn ‘yakshagana’. Unfortunately for him, the headmaster was a relative who asked his father about his absence. His father was a strict disciplinarian and the punishment ranged from ‘200 Uthak bethak’ to locking away his clothes so he couldn’t go out. Though he stopped going to the ‘yakshagana’ classes, his love for it remained and I for one am happy that he continued. Otherwise I would have missed learning about this great art from such an expressive person and my post ‘An introduction to Yakshagana’ would never have been the same without Dr. Manjunath Shetty. I could not resist putting up some of the impromptu videos taken by me. You have to excuse the quality because I was enjoying the performance to the extent that I could not hold the camera steady. Such a musical treat… He was also getting calls from his daughter whom he had to pick up. But I had to have this in the blog. Notice the change in tenor when there is a character change. 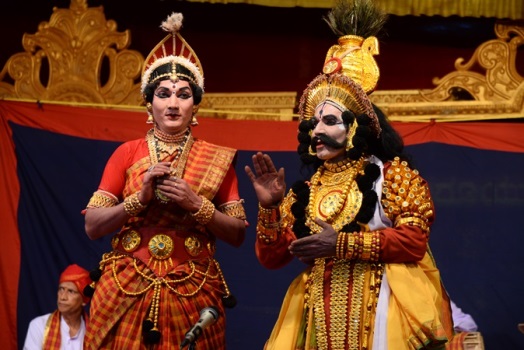 But first things first! Let me give you an introduction to Yakshagana, all in lay man’s language. This is just an introduction to yakshagana with stories for you, but if you want to read more about it you can click here. Yakshagana is a complete art form like no other. It is a fusion of all the Navarasas- the hejje, gejje, tala, laya, vesha, bhoosha, abhinaya, bhagavatha, matugarike. It creates a parallel mythological universe with its compelling theatrical experience. It is a fusion of dance, expressions, dialogue, discussion, debate, music, resplendent costumes and make up. All forms of yakshagana(yes there is more than one) have the ‘himmela’ (The group at the rear end of the stage) and the ‘mummela’ ( The artists closer to the audience on stage). The himmela consists of the lead singer or Bhagavatha and the musicians. The Bhagavatha is like the director of the production and controls the actors on stage. The musical instruments include the tala, Tabla, Chande (a loud drum), chakratala and the harmonium. The mummela consists of the dance and dialogue troupe. Dr.Manjunath tells me that the chande even to this day requires no mike. The sound is so loud that 5 to 6 villages nearby can easily hear the sound. The chande is an indication that there is a yakshagana performance that night. Yakshagana typically starts at night and goes on till the wee hours of the morning. I think this was mainly because in the olden days, there was no other form of entertainment and people who would perform would also perhaps be working during the day. Though now a days there are a lot of abridged versions of yakshagana, some troupes still maintain the all night show. It is performed on a raised platform called the ‘Rangasthala’ lit by oil lamps in the four corners. 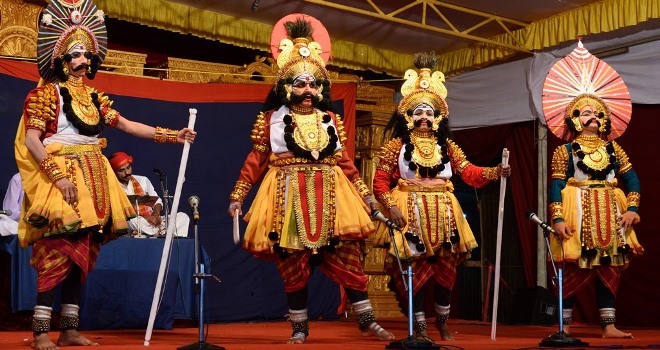 The forms of yakshagana in Karnataka based on the region that they come from, are called Thenku thittu( some parts of Udupi district, Dakshina Kannada district and Kasargod as well). It is characterized by the influence of carnatic music and the dance where there are a lot of high spins in the air and continuous spinning as well. The Badagu Thittu is from Kundapur to Byndoor and Uttara Kannada district. Here importance is given to dialogues and facial expressions. The headgear and costumes of this form is also very elaborate and takes upto three hours to be tied. The BadaBadaguthittu is the extreme northern parts of Uttara Kannada and not very different from Badaguthittu. Irrespective of the region it comes from, the subject is universal, good over evil taking their inspiration from the poetic epics such as Mahabharatha and Ramayana, and the Puranas. The main motto was to explain to the then illiterate public, the story in  an entertaining manner with a moral at the end. But whatever the story, it all begins and ends with a prayer. The artists first perform a ‘chowki pooja’ to the deity and the make-up chest, after which the performance begins, with a prayer and then there is the trial run for all the musicians with the Sthreeveshas. Check out my video…I think I did a good job this time. What do you think of the video? Let me know in comments….

Then the story begins….in the next blog post I will give you a couple of stories by Dr. Manjunath Shetty. Whoever set the limit to the number of words in a blog post? I have so much to tell you! This was just an introduction to Yakshagana. I will get you the stories in a day or so. Stay tuned. 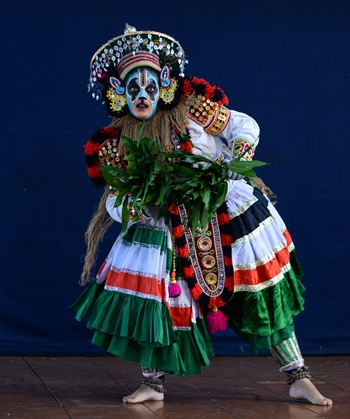 Have a great day.

Thanks a lot Sindhu. Do continue to read and give me your feedback. Subscribe to stay updated with every new post.

Thanks a Lot Sindhu. I am glad you enjoyed. Do subscribe to stay updated with new posts. Check out my video, your feedback on that would be great.