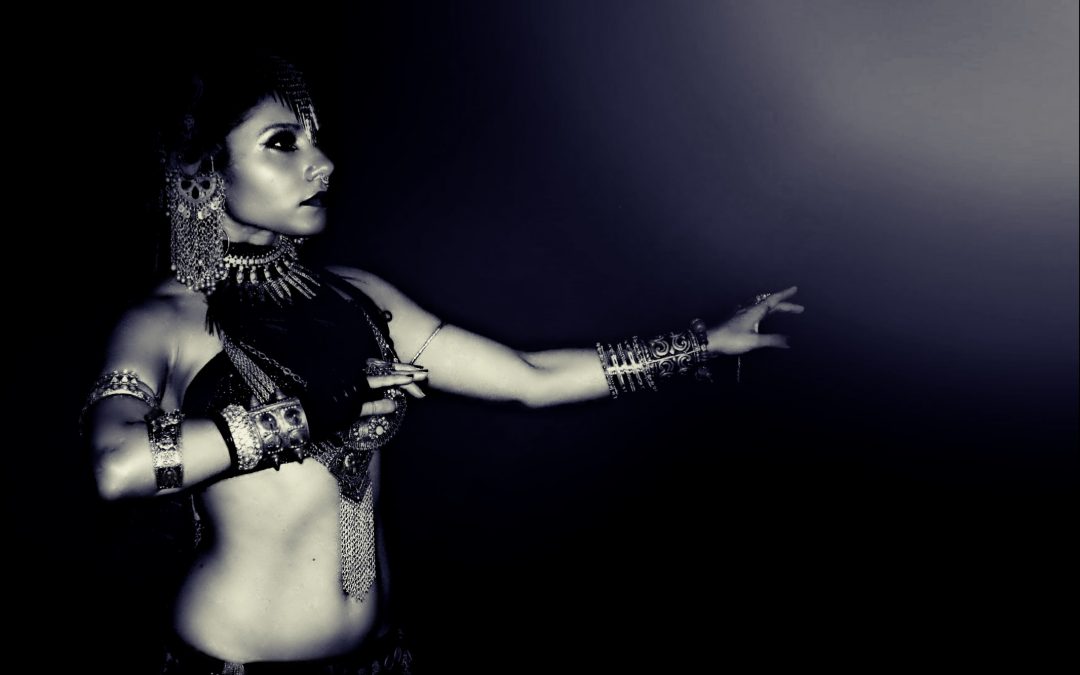 If we had met in passing it would have been a ‘hi’ and a ‘bye’. After all we were classmates for three years during our graduation. But I am happy, that I could meet and talk to Bindu Bolar beyond these pleasantries. An awesome personality, who has seen the ups and downs in life and emerged a success. She followed her passion inspite of the opposition and the doubts. She took risks with no guarantee of success- personal, financial and professional. She forged her identity through dance, giving it her own signature style. The Tribal Fusion Belly dance is a mix of the tribal belly dance as pioneered by Jamila Salimpour and Bindu’s own style of animation and popping. Tribal belly dance has its origin from the different tribes spread all over the world. Belly dance is originally a Middle Eastern Folk dance, but over the years has been adapted and evolved across different countries and styles. This also saw fusion in its costumes and changes wherein the belly movements would be in focus. Her beautiful collection of antique jewellery used in the dance form, reflects its different origins. There are hip belts, headgears, bangles, armlets and neckpieces featuring Indian coins, Afghani coins and pom poms from Rajasthan. The creative person that she is, she also has her own line of tribal jewellery called ‘Tribal Tijori’, which she makes from motifs in sarees, coins, shells, beads and all that appeals to her. The headgear is again a mix of cardboard and metal, which is handmade by her. She even makes her costumes sometimes. This makes it exclusive and helps her incorporate all that she likes. 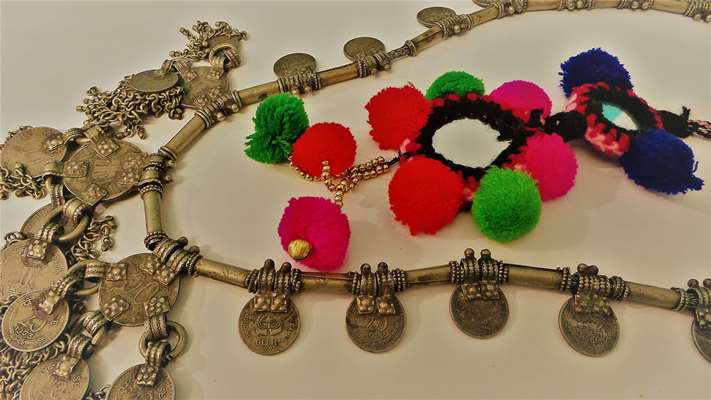 Tribal Fusion Belly Dance jewellery- Made up of coins,pom poms and mirrors 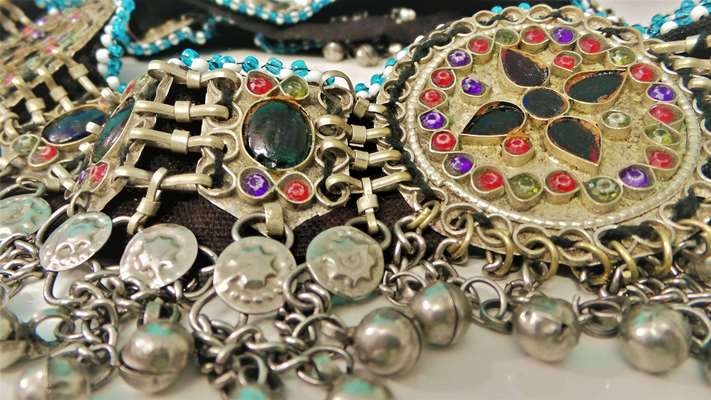 Lights Camera Dance is her baby, where she takes classes and workshops in the different forms of dance. Her team also works with different schools, choreographing their dances, as hobby teachers and teaching dance as part of their syllabus. Today she is successful and recognized as a ‘Tribalina’. A title earned by her through her unique dance form. She also conducts workshops of tribal fusion belly dance all over India and also abroad. But her journey has not been a smooth sail.

Tribal Fusion Belly Dance- Fusion and evolution in the costumes.Ornamental jewellery is now part of it.

Born and brought up in Mangalore, right from her childhood, she was fascinated with dance. But her family being conservative and education oriented, there was absolutely no scope for her to learn dance formally. But not to be dissuaded easily, she would take every opportunity to dance on stage. Be it in school, college, competitions, festivals or even New Year celebrations in the neighborhood. I still remember in college, whenever there was any dance completion, or festival, we would turn to Bindu to handle the show. But back in those days, we did not have the kind of exposure kids have these days. There was no career counselor, who would say, “Yes, pursue your passion in dance”. Falling in line with what was expected; she completed her Masters in Computer Applications and came to Bangalore with a job in IT. But that was a turning point for her, where she simultaneously started pursuing her passion for dance. Along with Oriental Belly Dancing, she also trained in dance forms such as Bollywood, Hip Hop, B-Boying, Kathak, Salsa, Popping, Merengue, Jive, Bachata and Contemporary.When she felt that she was ready to take the plunge, she gave up her comfortable job and started dancing in earnest and professionally. But the first studio that she established was not destined to be hers and after four and half years of putting her heart and soul into it, she was back to square one. But not one to give up easily, she picked herself up and was among the Top 30 in Dance plus of the Star Plus dance reality show. 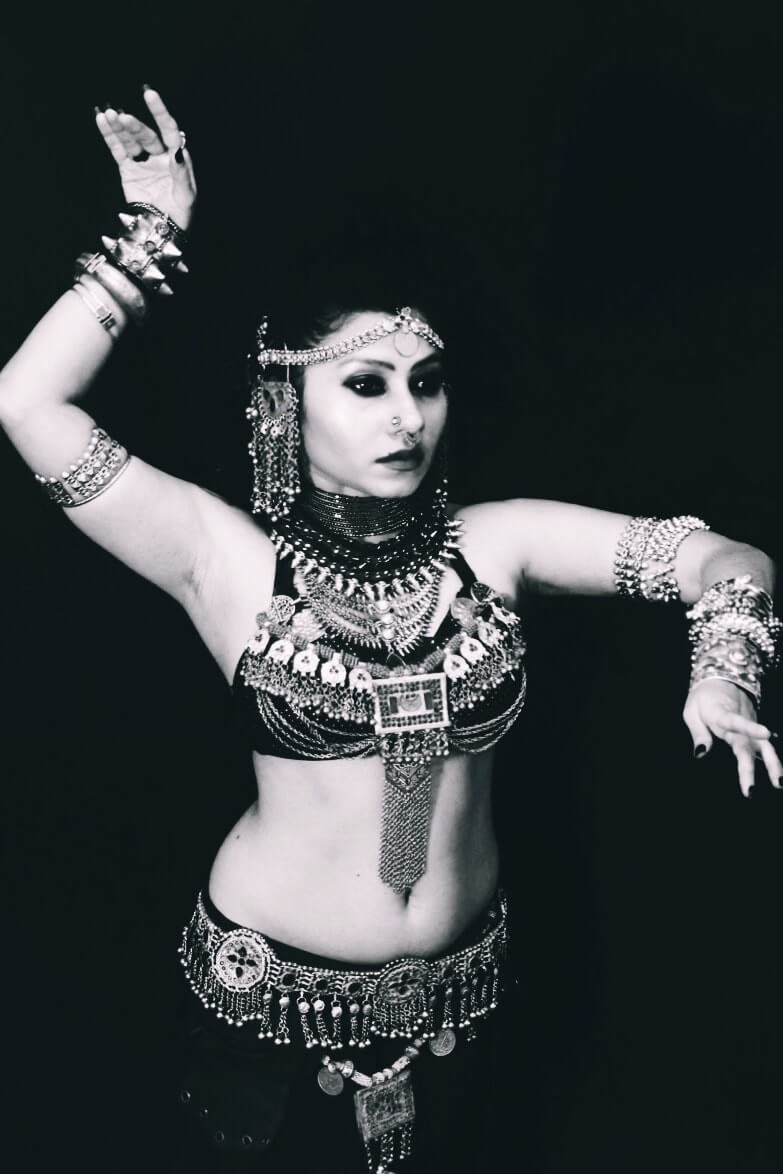 She was trained in Oriental Belly dance by Anna Olkinuora – UK and with this foundation, she self trained in Tribal belly dance. She won the title of ‘The Most Hypnotic Belly Dancer’ in the first International Belly Dance India festival, Hypnosis 2013. But even after winning the title, she felt that she should prove herself to the world and went to the United States of America, for training in the dance form under International Trainers. I was curious to know on who helped her make the arrangements in a foreign country, maybe a relative or a friend? But she is one girl with spunk! She took a personal loan to fund her travel and intensive training of four months (which is now repaid she says with pride and rightly so), with absolutely no contacts or friends to help her.  She became the first native Indian to complete the 8 Elements Initiation Certification with Rachel Brice (USA) – The pioneer of Tribal Fusion Belly Dance in the world. After which she went on to do workshops and some more intensive training with various other trainers across America. It was no less than an adventure, she smiles. Some of her travel stories had me spellbound. Having trained in various dance forms, resulted in a very unique fusion and a style of her own – Tribal Fusion Belly Dance. Her movements are characterized by intense and precise muscular isolation, and very sharp breaks & pops which contribute to her very mesmerizing and hypnotic style. Elegant yet raw her technique draws inspiration from nature and wild life. In fact, she tells me that the happiest moment for her was when her teacher Rachel Brice, saw her dance and was totally moved. The best compliment was when she said that, she could see the dance styles of all her trainers but was also ‘so much Bindu’. And Bindu wants the same for her students- to evolve in dance and create a style of their own. 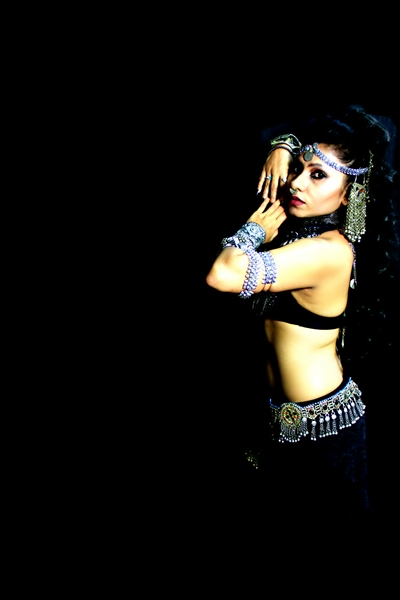 Seeing her syllabus and the subjects the training involved had me reeling. I had ‘No idea’ that dancing involved studying elements of History /Lineage of the dance form, Techniques formulated according to the individual teacher’s format, Yoga Based exercises, Choreography structuring, Costumes and its history in the genre, Stage performance skills and many more. So in case you plan to study Tribal Fusion Belly dance in an advanced format…better be prepared (just jokin!). But on a more serious note, Bindu is truly old school. She is very strict about which songs the children dance to. “Beedi Jalayle” is a strict No-No. She says, “After all, there are many fun dances where kids can enjoy. Why corrupt their innocence?” This sums up the person that she is- Innocent at heart but worldly-wise; a girl who loves plain vanilla but peeks through scary scenes in horror movies; creative in every which way and who loves to Dance.

I so loved talking to Bindu Bolar and learning so much about the dance form- Tribal fusion belly dance, and more so of her journey. Each artist’s journey and their path to the ‘Aha’ moment is unique. Thank you so much Bindu for letting us into your life and your unique journey.

Check out the video:

Lots of Twinkles to you. Have a great week…at least what’s left of it!

Pic Credits- Pictures of Bindu by Salman Sam. Thanks Sam for the lovely pics.