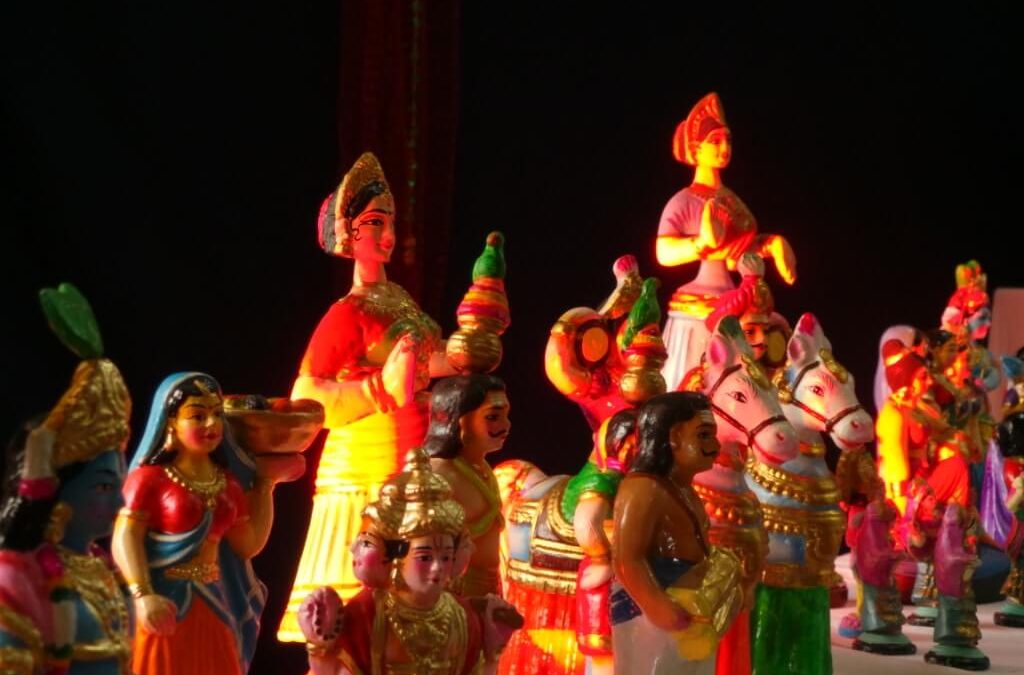 “Amma, who is that giant?”, “Krishna is trying to steal benne!”,“Such cute chairs!” There is no end to the questions and exclamations. Curiosity and enthusiasm are the secrets to a life filled with wonder. The bombehabba brings this wonder not just to the children but all those involved and lucky to come across it. Though we don’t have the custom of displaying dolls during navratri, my child is lucky to be a part of the beautiful Bombehabba at Sankalpa. 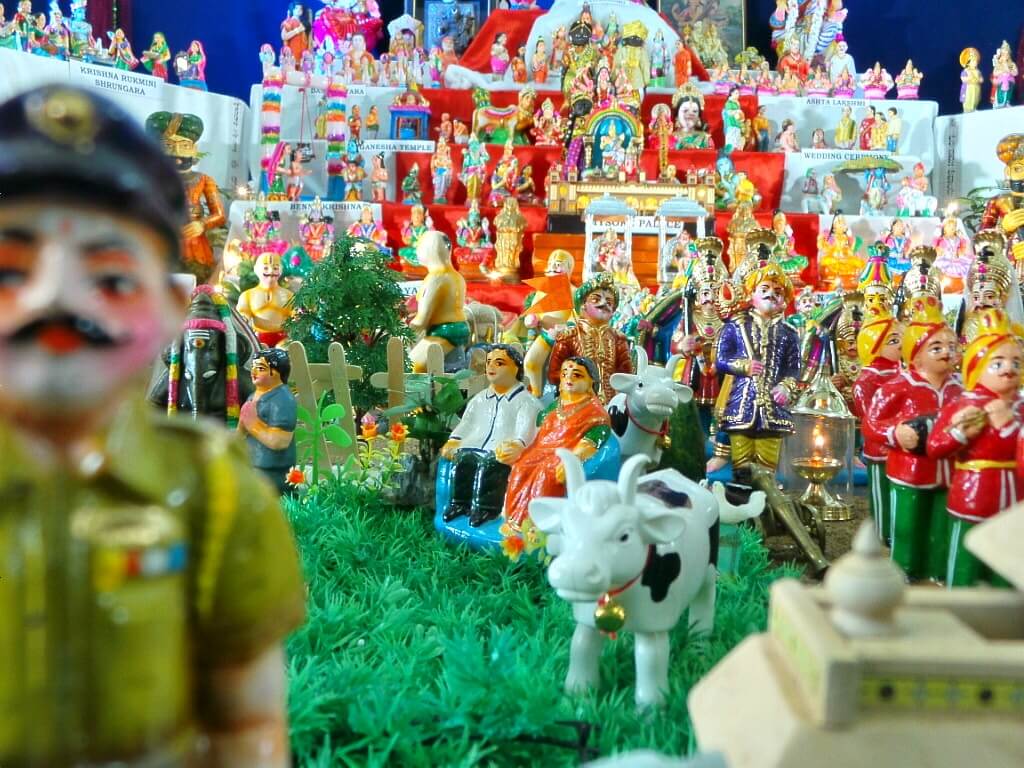 The Policeman at the forefront of all the celebrations 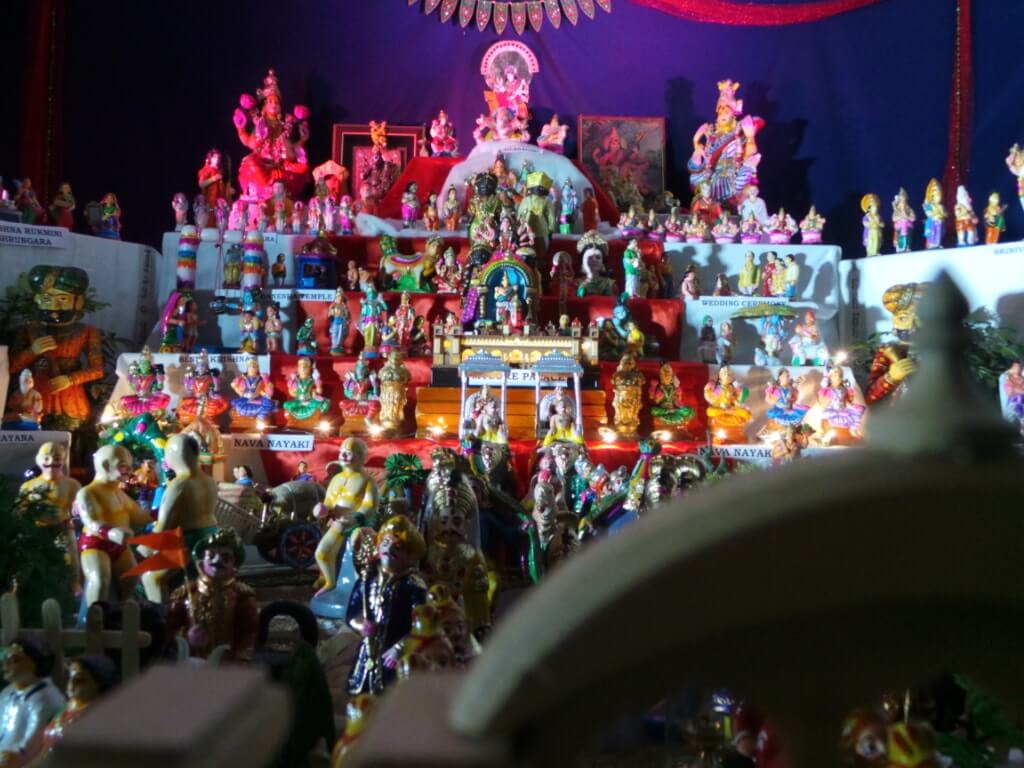 A view of the display

A snapshot of the Dolls Display

Bombehabba is celebrated as part of the Navratri festival in Karnataka, Andhra Pradesh and Tamil Nadu. Known by different names such as golu, kolu, bommala koluvu, bommai kolu and gombehabba, the spirit of the festival is the same…unmatched enthusiasm for the dolls. The meanings for the different names are ‘Divine presence’, ‘Court of dolls’ and the ‘Dolls Festival’. The children love this festival and it brings out the child in the adults. It is believed that when the Devi took on the demon Mahishasura, all the gods gave their powers to the Devi. This rendered them to a doll like state. The Bombehabba at Sankalpa and everywhere else is an ode to their sacrifice. An offering is made to the dolls on display and distributed as prasadam. Festivals in India are occasions for celebration and socializing. The Bombehabba is more so because of the unique arrangement in each household depending on the different themes. The “ooohs” and “aahhss” are countless. Usually arranged in steps, some opt for odd number of steps and some houses are totally ruled by the dolls, ranging from one to several rooms. 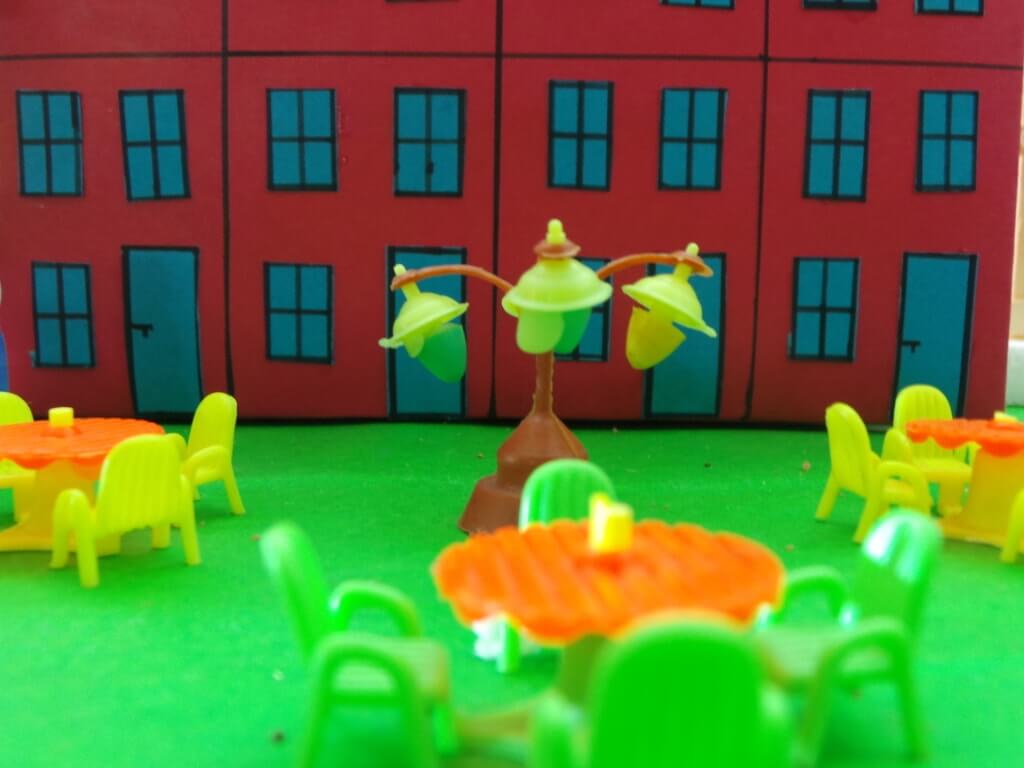 This navratri was all about Mangalore Dasara for me and I had decided to write about Bombehabba only next year…but when I saw the beautiful Bombehabba at Sankalpa, I HAD to write about it…let me show you all that I saw.

The Pattda gombe – Also called Pattath Bommaikal or Marapacchi bommai, they are the main dolls, depicting the husband and the wife. Given to the bride by her parents, they are the first of her collection of dolls to be displayed at Dasara. Made of teakwood, rosewood or sandalwood, they are dressed and decorated in silk and accessories. Alongside the Pattada gombe, a wedding ceremony is also featured here. 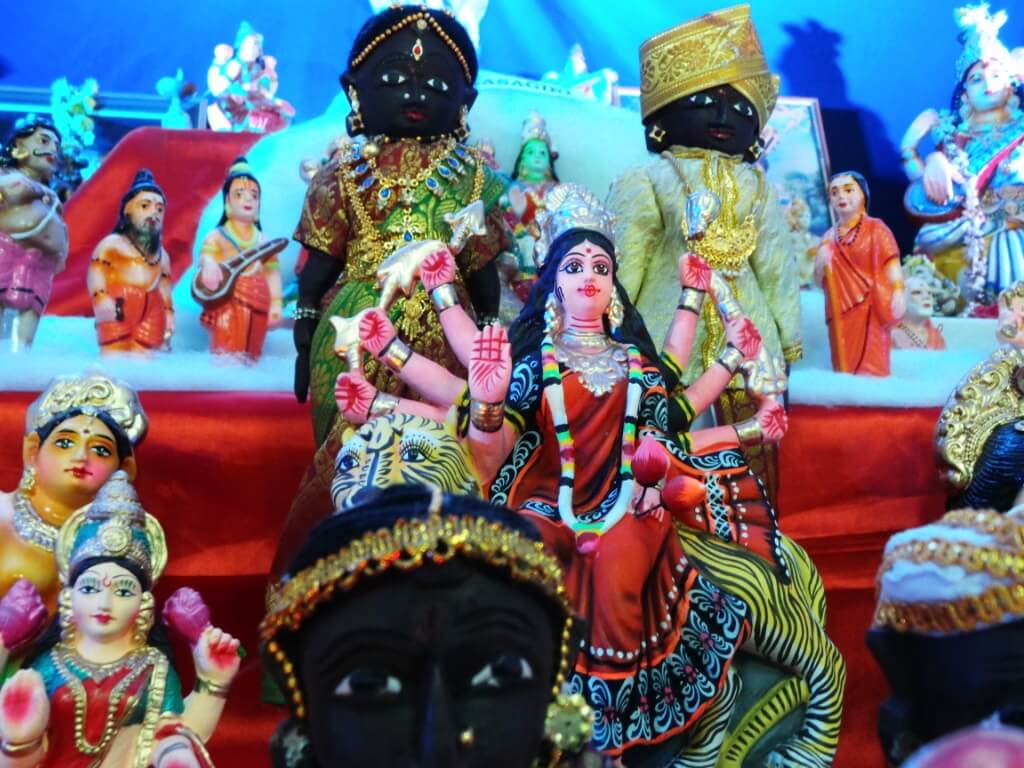 The Pattada Gombe decked up in jewellery and silks

Goddess Saraswathi – She is the inspiration, the centre and being of Vidya or learning. Children are seen at her feet, bowing to her in humility and prayer.

Ma Durga – Riding the tiger, she is the epitome of courage, bravery and will.

Gowri and Goddess Lakshmi look resplendent and complete the Devi in all her forms. The Goddess is the epitome of compassion, learning, courage, goodwill and wealth. The Navanayikas, the Ashtalakshmi are all symbolic of her benevolence. 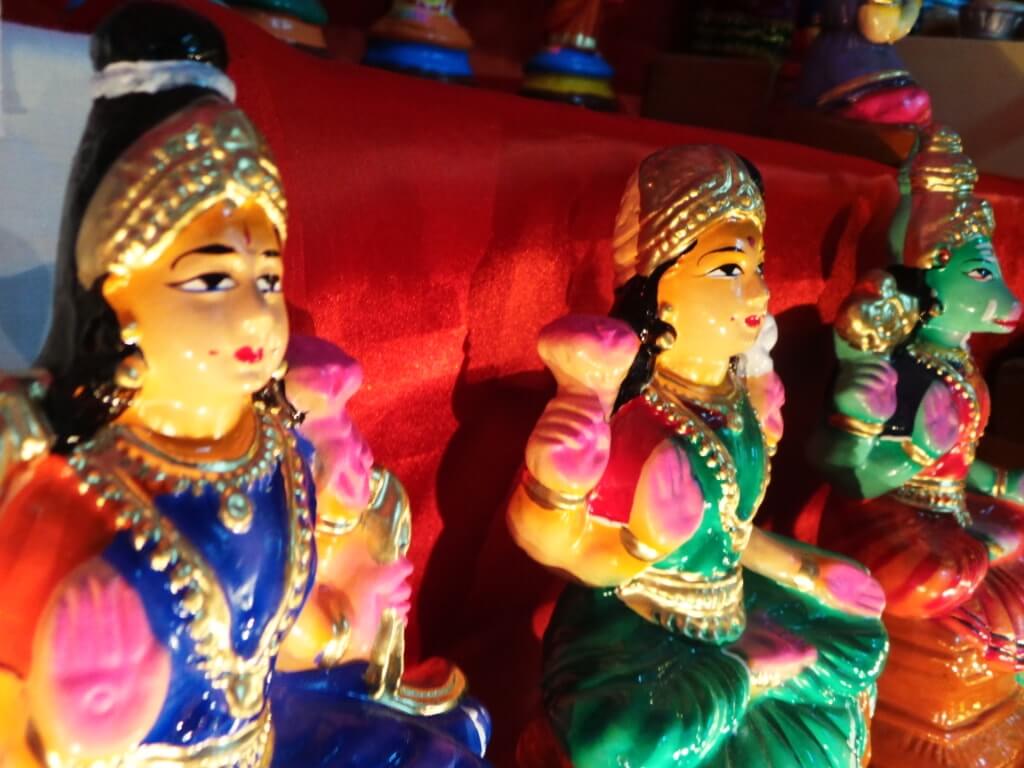 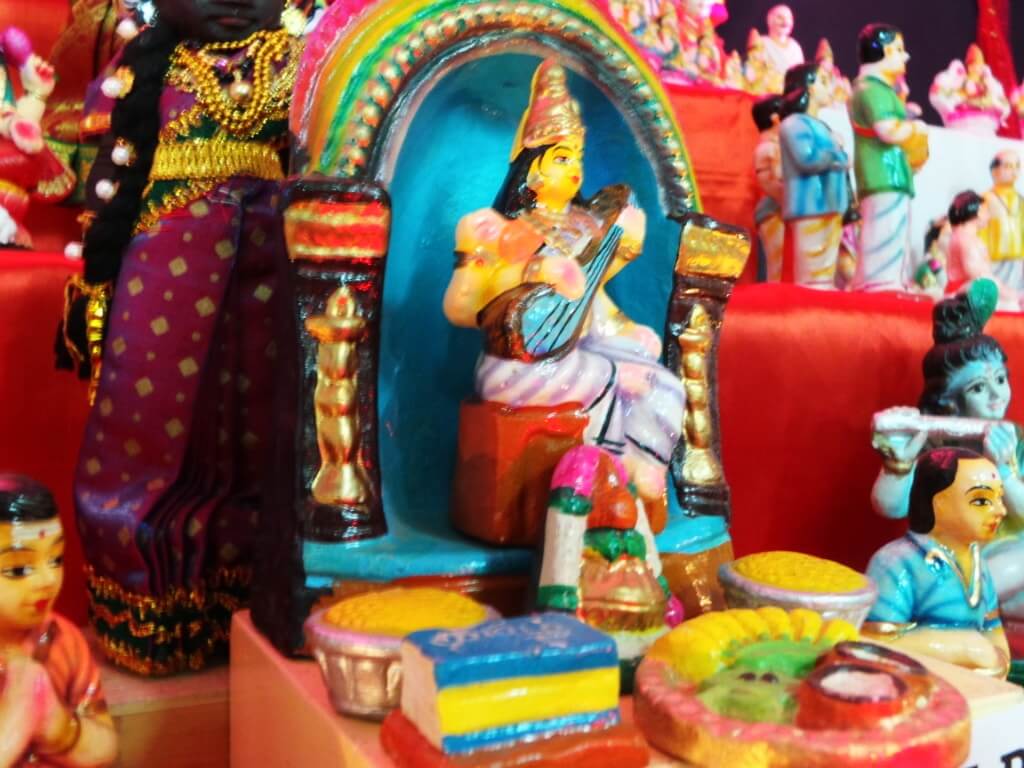 Saraswathi Puja is an important aspect of the display

Krishna – many of Lord Krishna’s Bala Leelas are depicted at the Bombehabba at Sankalpa. The Benne Krishna, trying to steal butter, the scene of the Govardhan mountain being lifted by Krishna with just his little finger, Krishna eating butter are some of the depictions that are very popular with the kids. Instead of us telling them about it, they will be the ones to educate us on these pranks. Krishna’s marriage to Rukmini and Rukmini Shringar are not to be missed. I especially loved the maid holding the mirror…Shrinivas Kalyana is also depicted with all the Gods and Godesses in attendance. 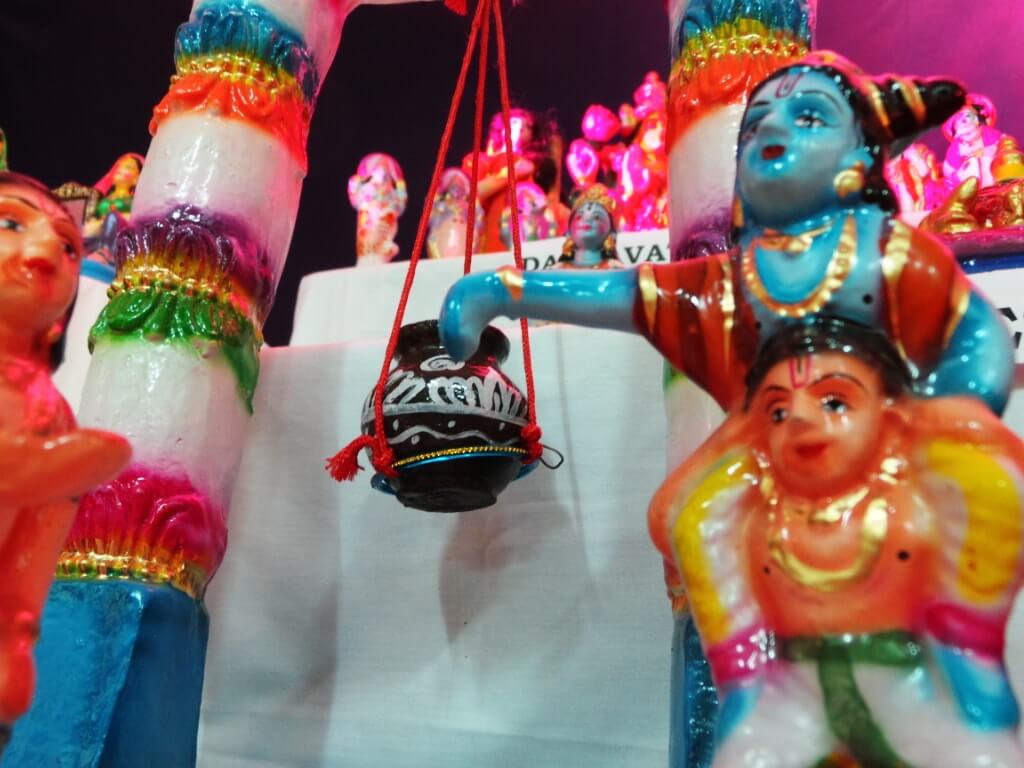 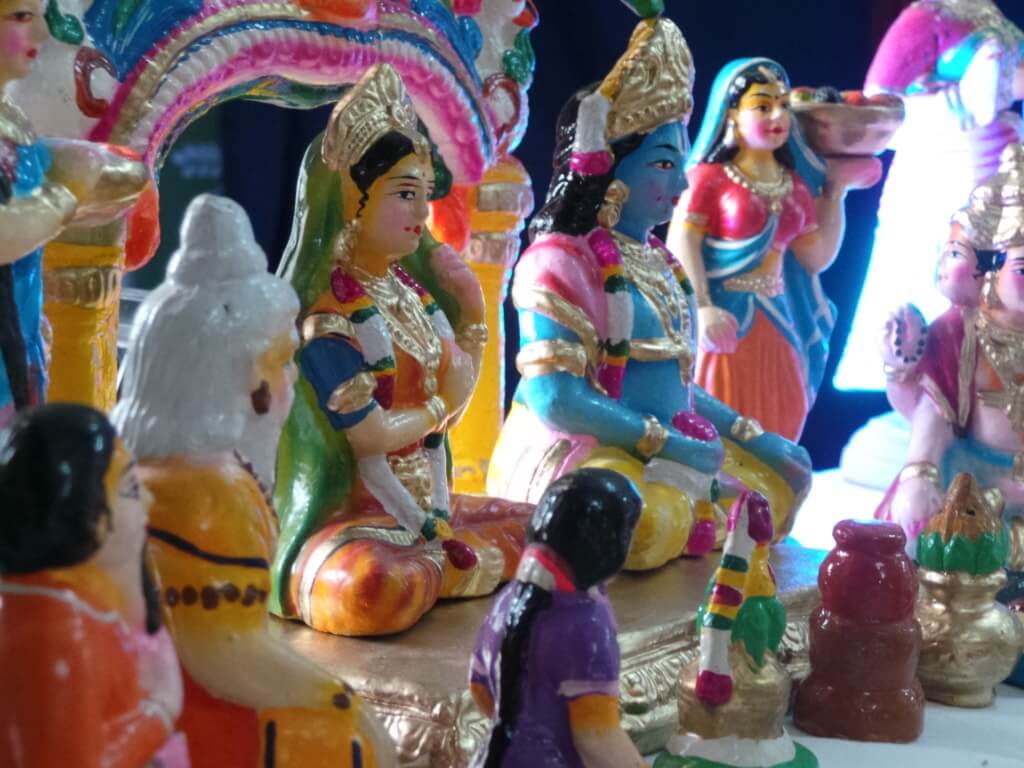 The couple selling provisions – I loved the small vessels around them with the chillies, spices, grains and grams. The vessels in sandstone, brass and copper are truly appealing. 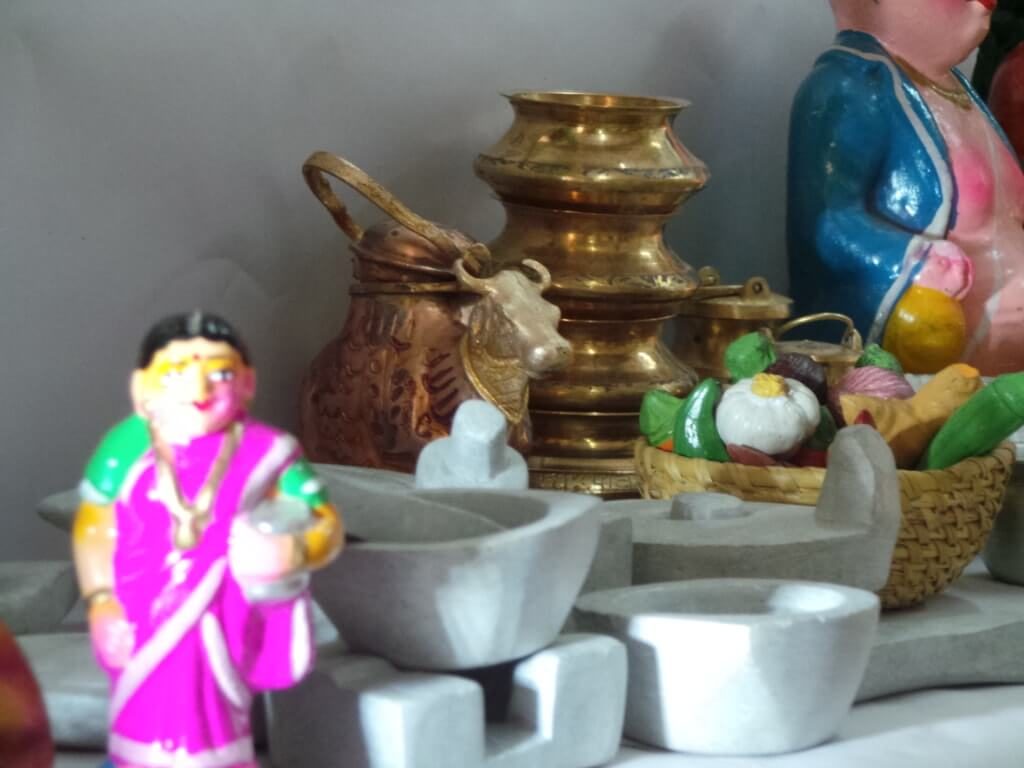 Prahlad Pattabhisheka – Prahlad, the king who brought back happiness to his kingdom, who replaced the evil with the good and who set a new benchmark for devotion.

Kumbhakarna and Bakasura – with all the tasty snacks before them captured the attention of the kids and then it was all about them and their stories. 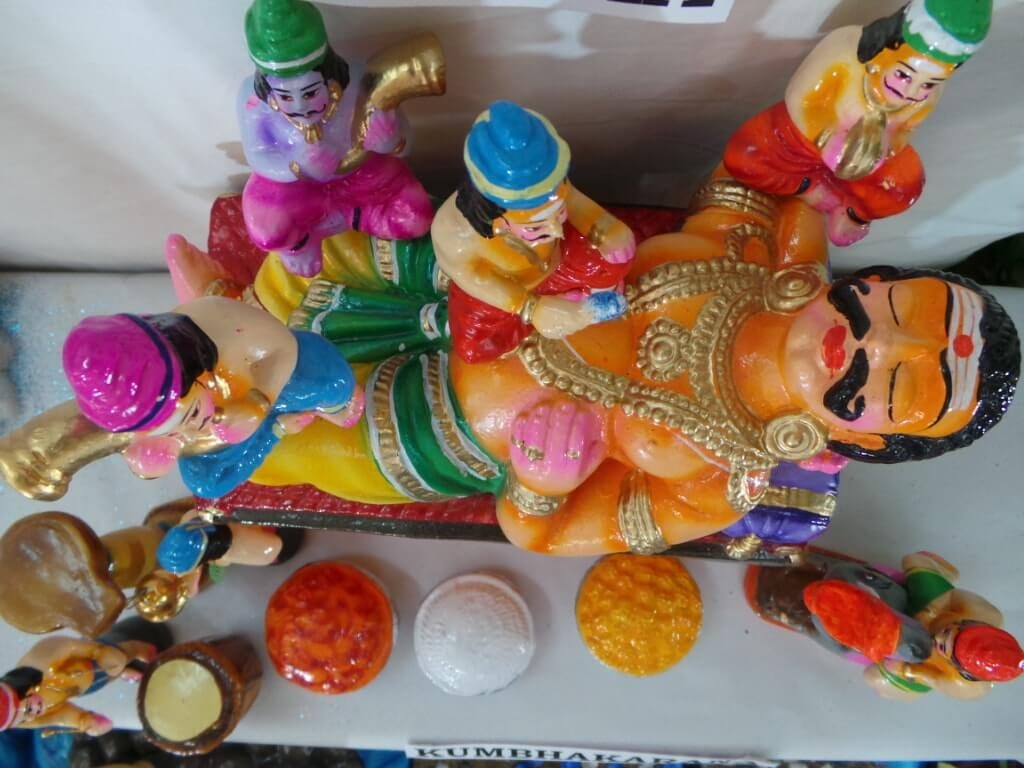 Kumbhakarna being woken up 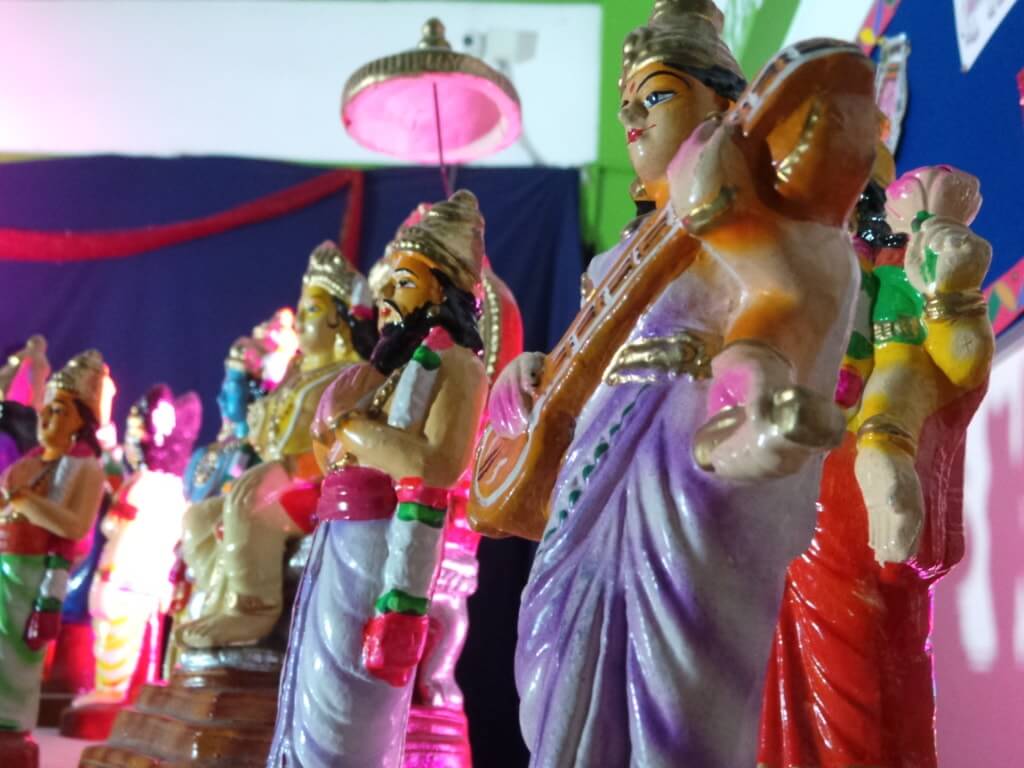 Prahlad Pattabhisheka attended by the Gods and Goddesses

Ram and Hanuman – Hanuman bringing the sanjeevni and the monkeys building the Rama Setuve needed some elaboration. Miss A has a question…”If I write Shree Ram on a rock, will it float? Then we could also go to Srilanka! What fun!” Well….I wish.

Village life – The scenes from a village are beautifully translated in this Bombehabba at Sankalpa. The grinding stone immediately transported me back to my childhood home. When I used it for the first time, what pride I felt! The first masala ground by me maybe when I was 10 or so..
Not because I had to do it, but because I wanted to!

The Harvesting season and Pongal– I loved the simple yet effective way of bringing the reason and the celebration together. The many stages of growing our food are all seen here. 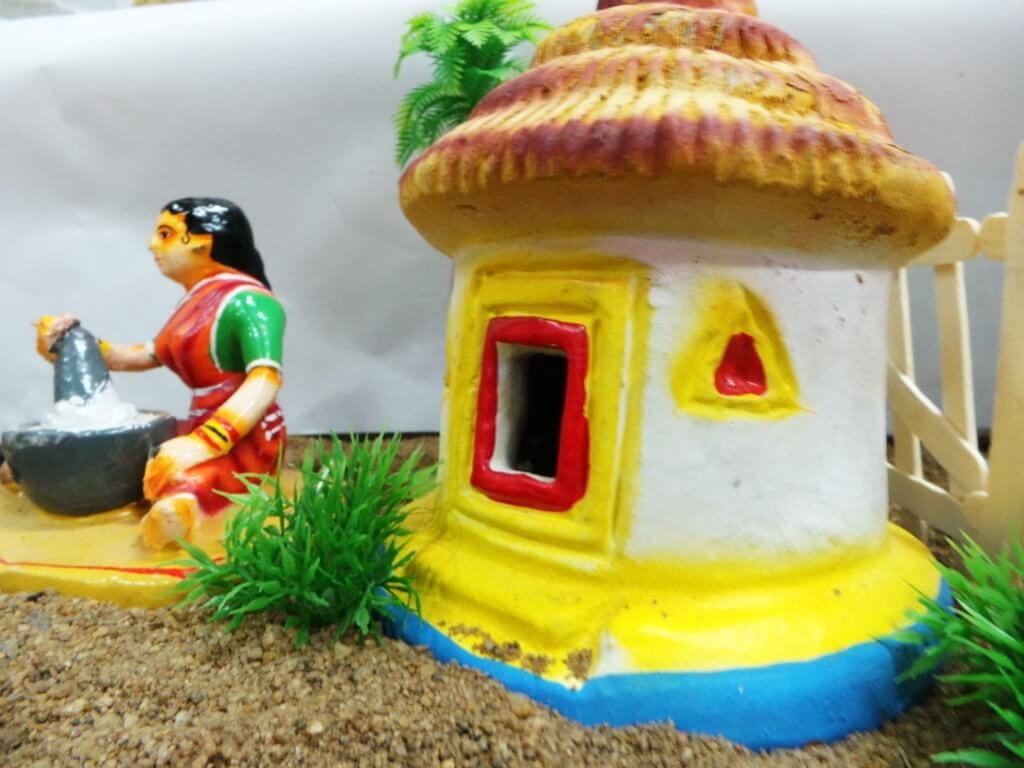 Stories I say – Stories are an all time favourite with kids and everyone else as well. The lion and the mouse, the thirsty crow, the cunning fox, the crocodile and the monkey are all there waiting for you at the gombehabba at Sankalpa.

The star of the show- is definitely the Mysore palace and the Dasara Procession. Including the ambaari, the cultural extravaganza and the band leading the way, it’s amazing. The view from the archway is awesome, right up to the palace. Flanked by the zoo on one side and a park on the other, it gives us a glimpse of the festivities around Dasara. The lions, Ms. Jyothi Chetan tells me, are inherited by her and are more than a hundred years old! 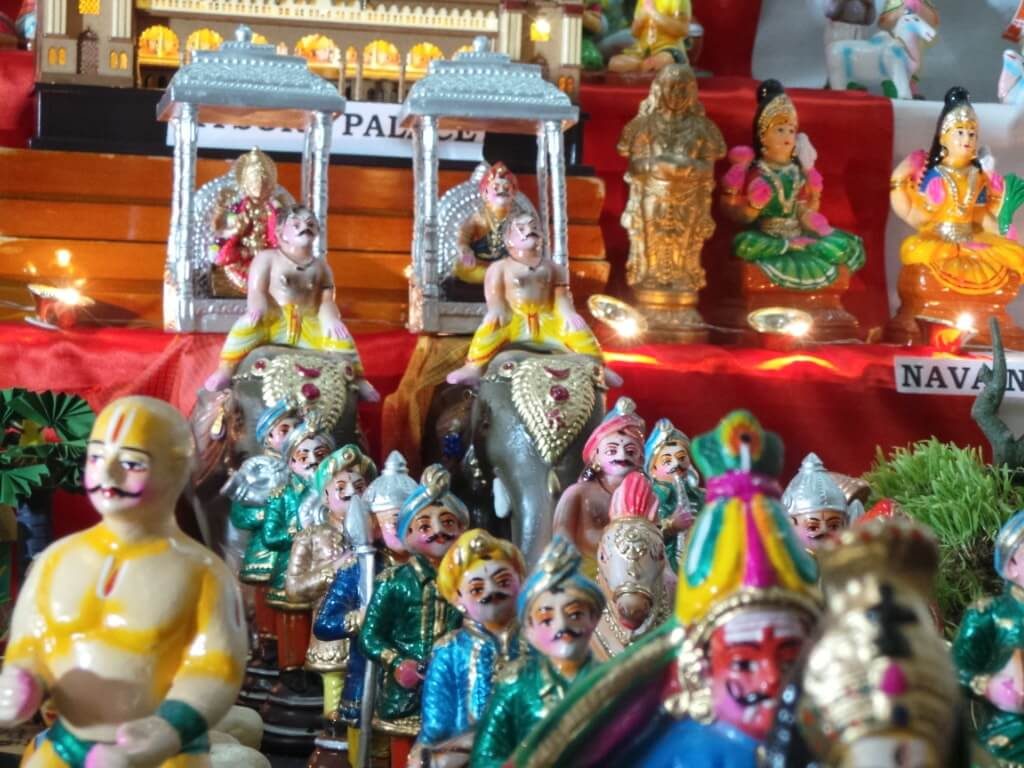 The beautiful display of dolls during the Dasara Festival. 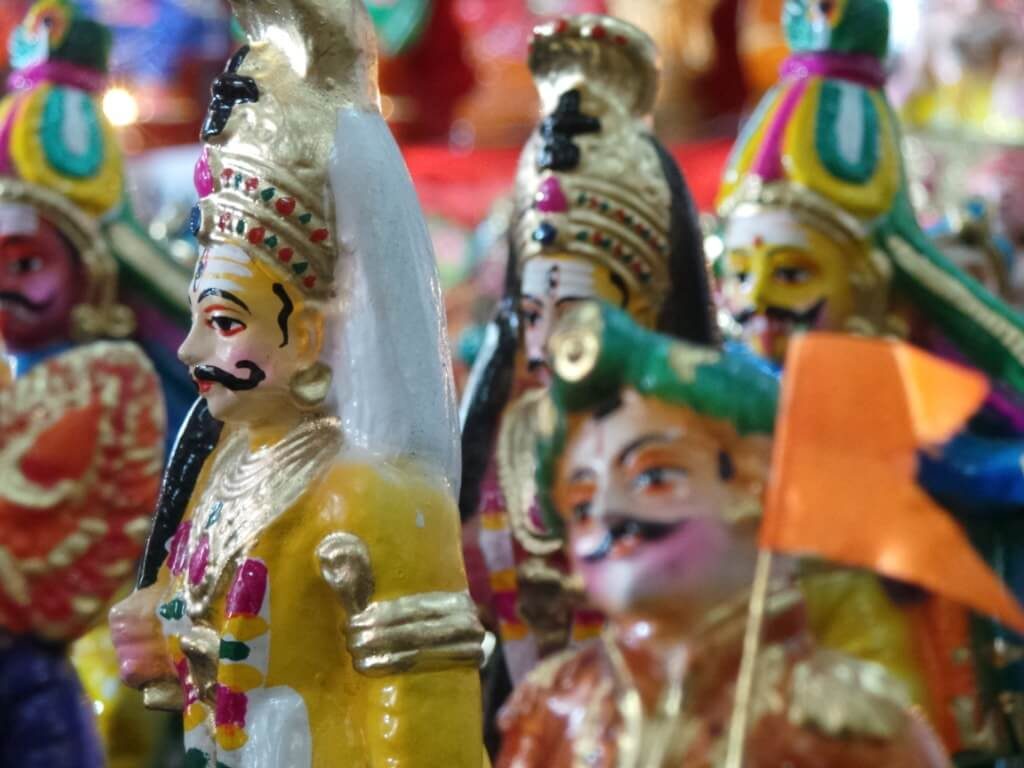 The Kondapalli toys were looking majestic and I have decided the minute I go off my ‘no shopping phase’ Iam going to buy some for myself…ok not some but at least a pair!

The School – complete with the building (a DIY made of chart paper), the teacher, students with benches and desks, a blackboard and a fan! Most apt when the Bombehabba is at Sankalpa Montessori School.

The Town – The cityscape is depicted with high rise buildings, quaint houses ( a DIY of paper cups), channapatna toys, vehicles, roads with humps and bumps( the speed breakers), the streetlights and vehicles. The cute chairs and tables in plastic, the malai kulfi seller, the play area for kids are all super cute. 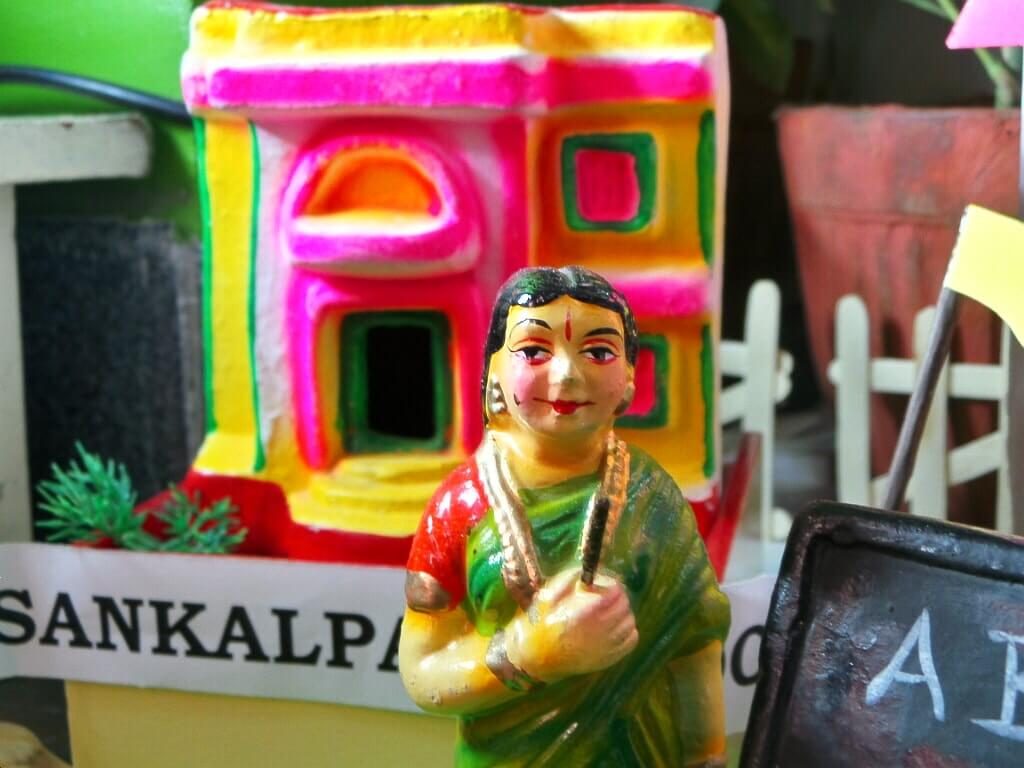 The school with the teacher and students 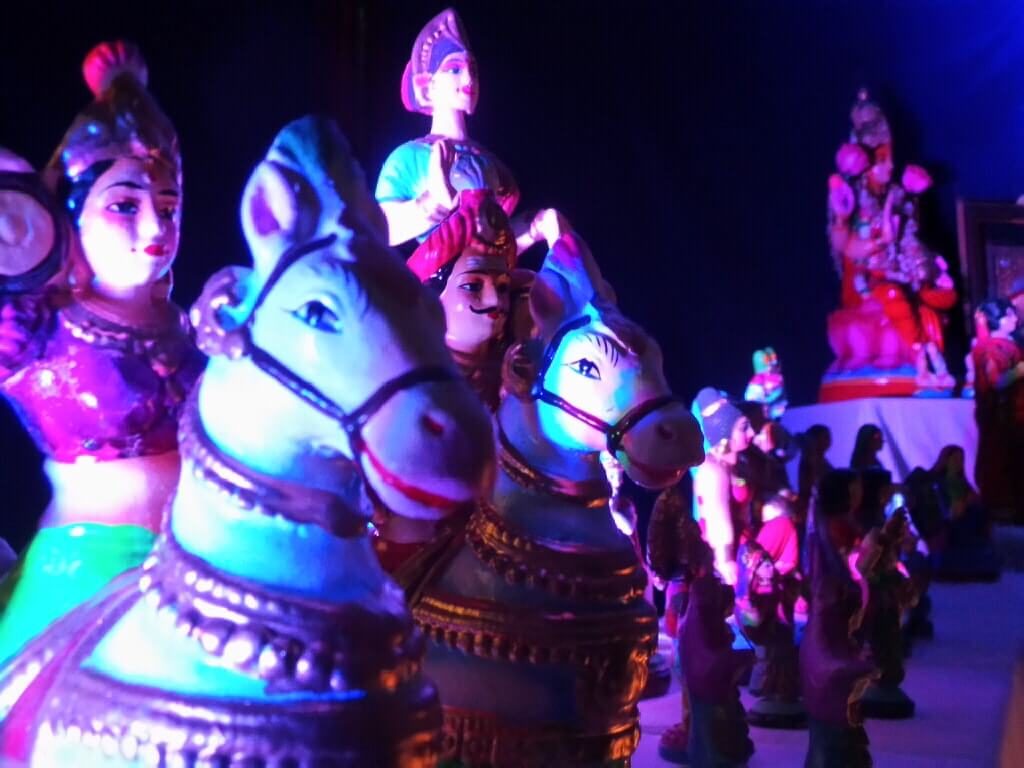 When I visited, I couldn’t resist asking the visitors about their favourite doll in the display…Check out the video on that.

All in all, a wonderful team effort to showcase the gombehabba at Sankalpa in its full glory. Kudos to Ms. Jyothi Chethan and her wonderful team. 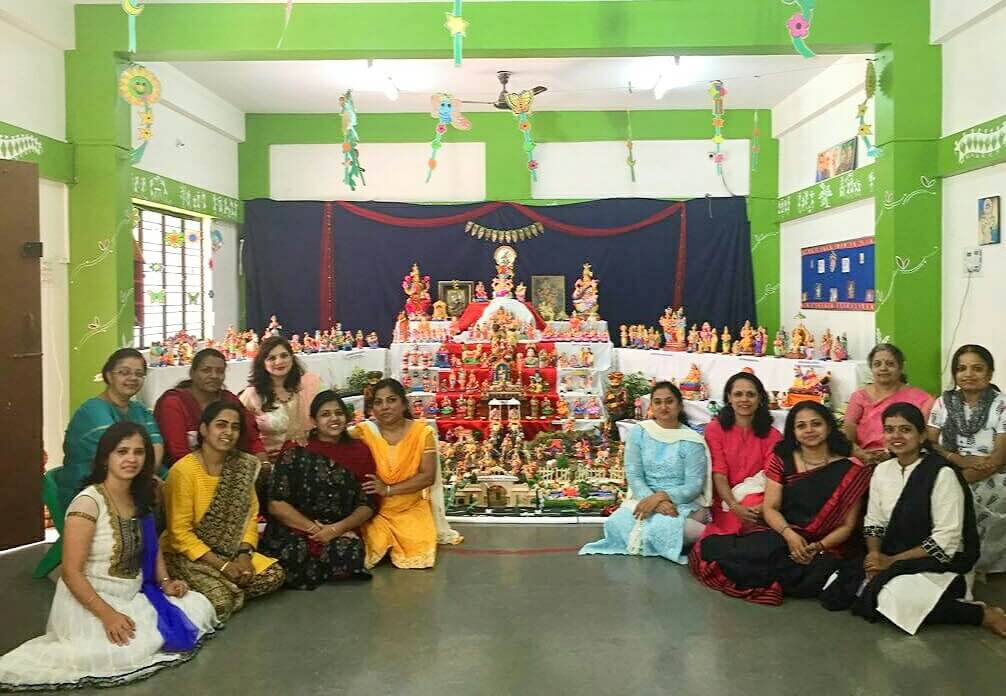 The team at Sankalpa headed by Ms. Jyothi Chetan

May the festivities continue to bring light and goodwill in our lives.

PS- If you miss it this year, no worries. You can always take this as an inspiration and have one of your own next year. Don’t forget to send me pictures though.

oRemarkable and extremely well written article Ms Anupama , my compliments. The narration about each and every doll is amazing. Every capture compliments your thoughts and imagination . I highly appreciate your hard work for creating this post .

Thank you so much Ms Jyothi, for the wonderful opportunity. I totally loved it and you have inspired me to start a small collection of dolls atleast. I have also uploaded a video with Visitor speak. Do check it out. All the visitors just loved it..https://youtu.be/b_KFZyTFnE8
Give me your like, feedback and subscribe. Thank you.

Beautifully written Ms Anupama…hats off to your observation n explanation about each doll n awesome pics too..thank you

Thank you so much Hema. I love it that you left a comment here. Do check out the video that I have just uploaded with Visitor speak. https://youtu.be/b_KFZyTFnE8
If you like what you see…give me a like and subscribe.Thanks.

Thank you so much. A school celebrating festivals and inviting parents and visitors is definitely something to be appreciated. After all, its here that the children learn so much of the world around them. It was truly wonderful and I am happy I could write about it.