Onamotsav Day2 at the ECA 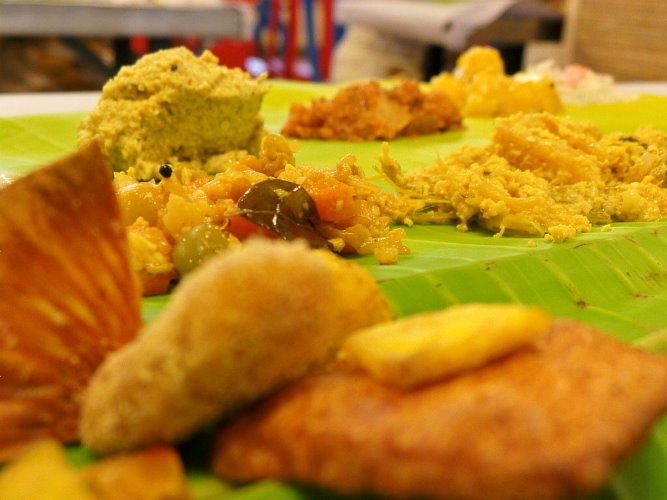 Day 2 of the Onamotsav was bright and beautiful. After the wonderful function of Day 1, Day2 began with the Pookkalam competitions, the sadhya and the Onaraagangal with the members participating with lots of enthusiasm, showcasing their musical talent. 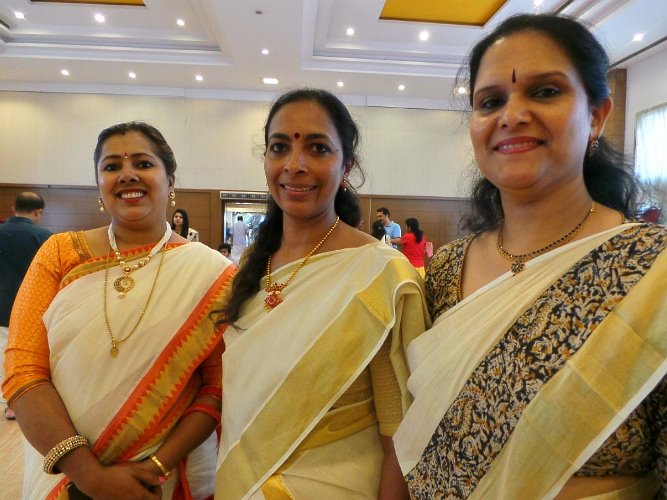 Traditional dress of Kerala- the Kasavu

The sadhya is an elaborate meal prepared especially for Onam with nearly 32 items. The fried snacks include the salted banana chips which was something we always asked our colleague to get from Kerala. Served on plantain leaf, I was totally spoilt for choice with the number of pickles before me. I especially loved the Puli inghi (which is made using ginger and tamarind) and the naaranga achar (made of wild lime). After this the side dishes, rice, rasam and sambhar followed. I believe there is a certain order in serving these items. The best part was that every now and then, someone or the other would come along and ask us if we wanted a second helping of any item. I totally enjoyed the hospitality and loved the meal. Even the payasams were more than one! When I asked some members on their favourite part of Onamotsav, it was the sadhya and the cultural programmes organised by ECA. The kids off course loved the sadhya!

Sadhya the traditional meal of Onam

After the sadhya, it was the melodious Onaraagangal and then the Double Thayambaka by Cheruthazham Chandran, Chirakkal Nidheesh and Team. This was one energetic performance of over more than an hour! Mainly a templeart, it is also performed outside during festivals and any important milestones or functions. The main chenda performer improvises rhythmically on his team’s beats. In this case there were two main chenda artists, which is called the double thayambaka. It began with a slow pace, picked up the pace and ended with energetic frenzy. In fact the audience was so thrilled and immersed in the performance, I could feel the place pulsating with tremendous positive energy. Towards the end, one of the audiences was virtually playing the beats with the artists and their involvement was definitely a show in itself! After felicitating the artists, it was time for some selfies with them. Onamotsav was definitely an unexpected treat for me to see such talented artists come together for the show.

The deep tone of the Mizhavu by a promising artist from Kerala (with just the palm and fingers) stayed with me for a long time even after Onamotsav. Though traditionally always played as an accompaniment to Koothu or Koodiyattam, it is now also being performed solo. It is a big copper vessel covered at the mouth and placed on wooden platform specially made for it. Earlier clay pots were being used but were later replaced by copper. When I was reading more about this, I found it fascinating that it is regarded as Brahminic, and all the rituals followed for a Brahmin are followed for the Mizhavu, like the Upanayanam. When it can longer be used, it is cremated with ceremony! 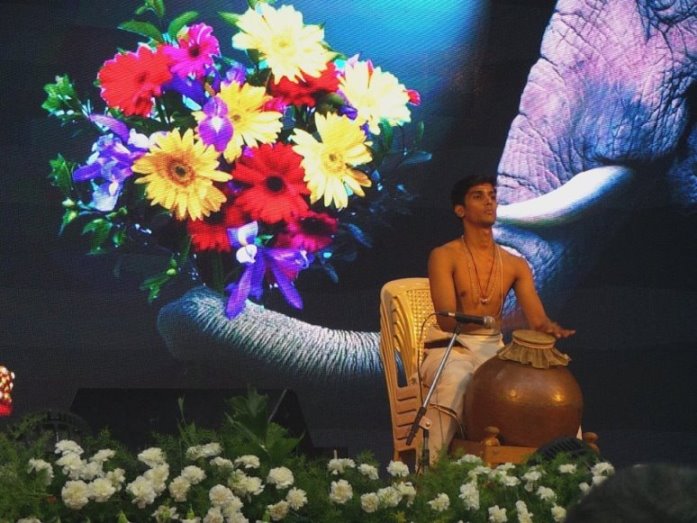 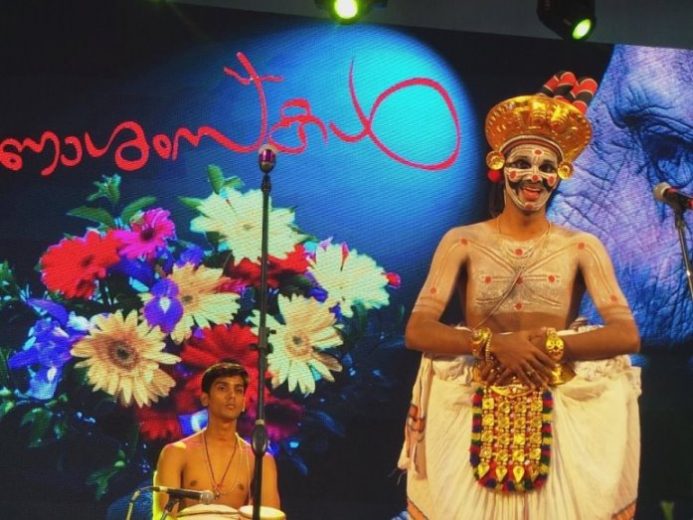 The Mizhavu was the accompaniment to the Chakyarkoothu by Kalamandalam Ramith Ramesh. The Chakyarkoothu is a form of monologue and a blend of humour, mime and satire. With sandalwood paste on his body with red dots and an unusual head gear, he resembled a jester. Usually based on epics and Puranas, he dons several roles and also gives commentary on the socio-political scene. It begins with an invocation, some dance movements and facial expressions, accompanied by the deep tone of the Mizhavu. The performance at ECA was based on a scene in Ramayana, involving Rama and Sugriva. He also used this opportunity to ridicule many in the audience. Where it is his job, everyone took it sportively, turning around to see who the butt of his joke was. Though I did not understand him completely, I think he even made fun of me as I was only looking through my camera! It was a very spontaneous performance along the lines of the stand-up comedy common today. Towards the end, he humbly apologized for having pulled everyone’s leg. It was an enjoyable evening but I couldn’t stay until the end. 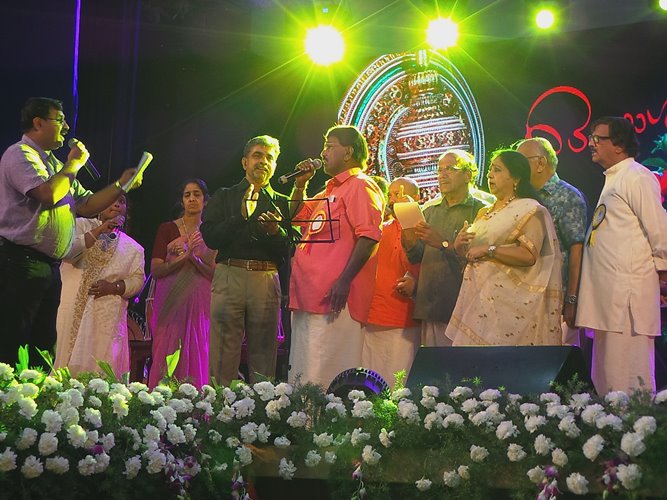 After this I stayed for a few more minutes to see the introduction of the D4 Dance winner team of Ramzan Mohammed. Too bad I couldn’t stay for the whole programme. All the same, Iam happy I could be part of this beautiful celebration, even if it was for a short while.

I loved it ECA!

Lots of Twinkles to All of you.

Thanks for writing about Onam Eca and Malyalees 😍

Hi Sindhu. Thank you for the lovely comment. I totally loved the experience and the people I met. Iam happy I could witness this beautiful and wonderfully organised programme.