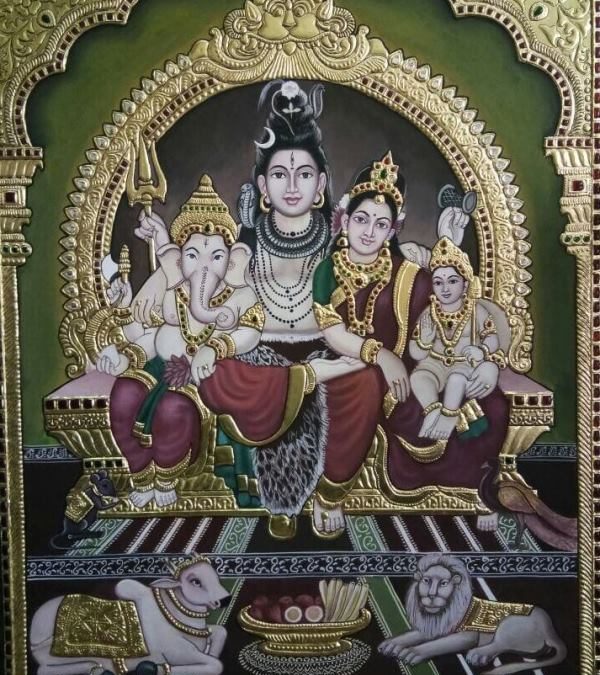 Tanjore or Tanjavur art immediately brings to mind gold, precious stones and cherubic Krishnas. It is the art of the royalty which truly flourished as it is today under the rule of the Marathas. Initially adorning walls of temples and palaces, it slowly moved to planks made of teak and rose wood. An elaborate process of preparation is involved in getting the plank ready for the work of art. In the earlier days, the artist would create a piece as per the patron’s wish including the precious stones provided by the patron himself. This was a form of sacrifice, where the riches go back to the Lord but adorn the patron’s house. 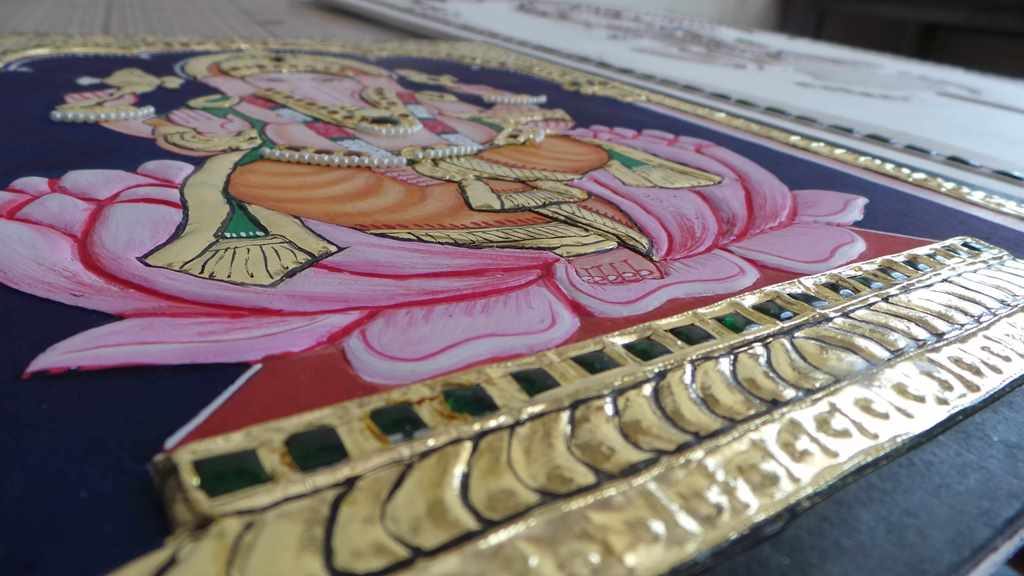 I truly admire the will of the artists to have even to this day maintained the same process on the planks as on the walls. But with the intervention of modern techniques and supplies being available, many of the laborious processes have been tweaked to give the same effect with less pain. This has its advantages as well as disadvantages. Where the end product remains the same, many argue that the natural materials enhance the beauty of the painting over time. Though materials are more easily available when we opt for the modern techniques, the processes largely remain the same. 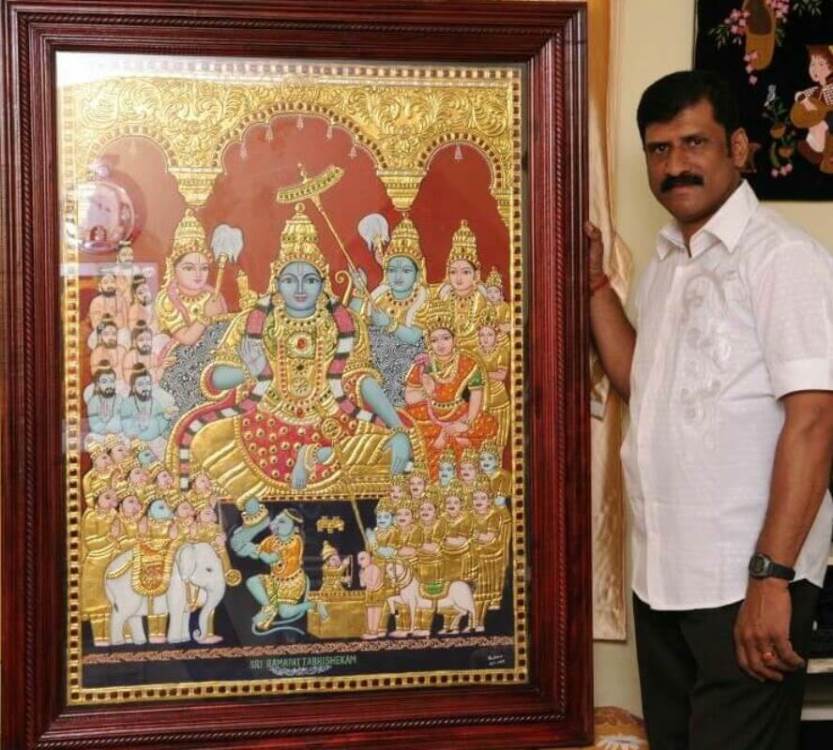 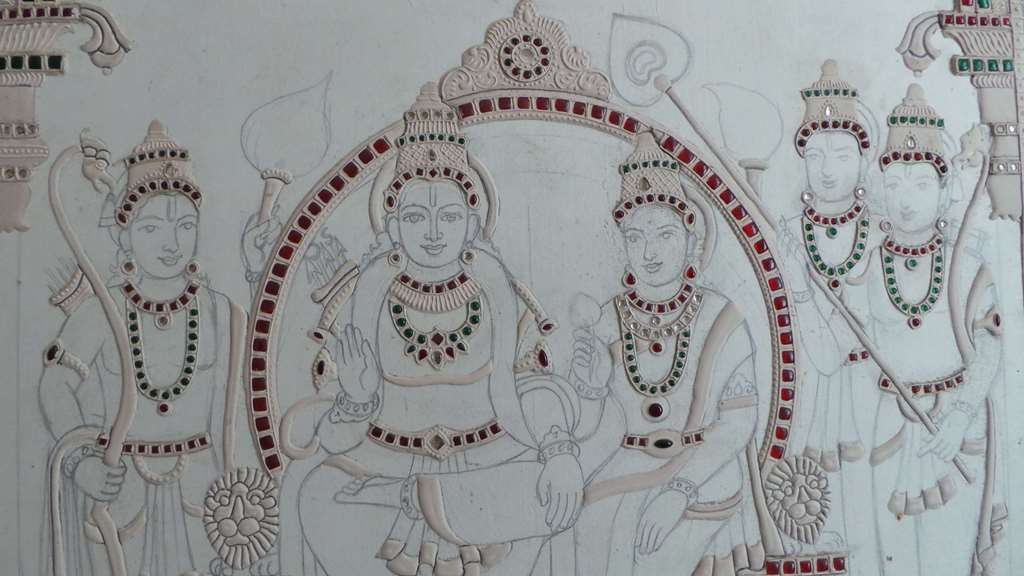 Mr. D Sreenivas is one such artist who has been working on Tanjore art and Mysore art for more than 20 years now. He tells me that initially it was only teak or rosewood planks being joined together and used as the base. His large repertoire of work consists of the three broad categories of Tanjore, the ones devoted to Vaishnavism, Shaivism and the last one of kings, saints and others. Tanjore art mainly portrays Gods and Godesses as the main icon under the canopy or Prabhavali flanked by other gods, humans and animals. In the earlier paintings, gold was not used as extensively as in the later mid 19th century paintings. The earlier works also had influences of the west where angels could be seen in the sky showering flowers on the diety. In the present context most of the paintings have large isolated deities compared to the more elaborately composed works of the yesteryears. 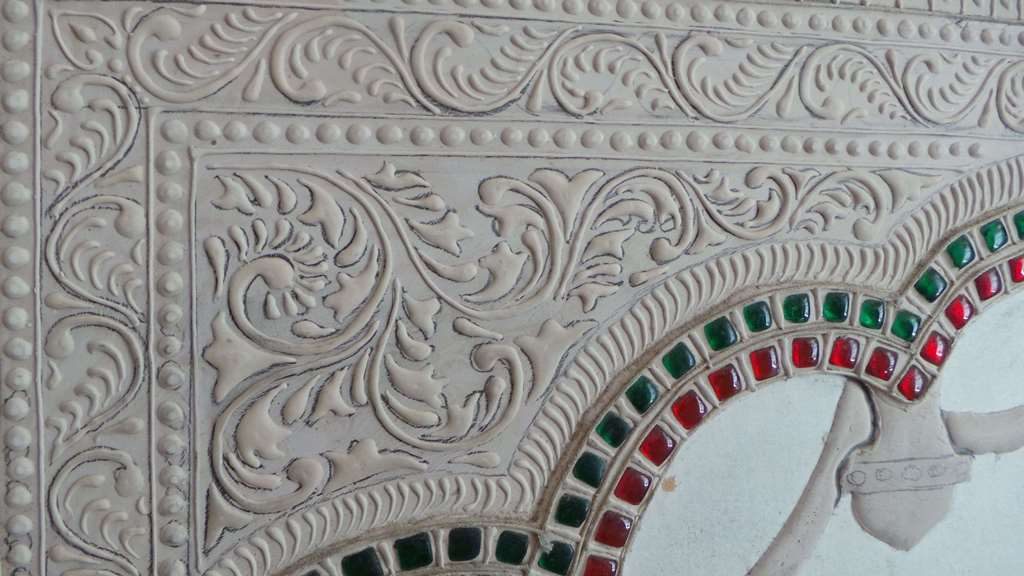 In the earlier days, the canvas consisted of sliced wood planks over which a cardboard would be pasted and over that two layers of cloth. The glue used in those days was made of tamarind seeds. After which white lime paste formed the base to toughen the canvas. This lime paste actually later reacted with the colours making them brighter over the years. In the current format most of the artists use cartridge sheet as the base. The lime paste canvas was then smoothened with a polishing stone and the sketch drawn. An adhesive paste was then formed using raw unboiled lime with the glue of a local tree. The main attraction of Tanjore art is the three dimensional effect given by this layer of paste. Applying two layers gives it a raised platform mainly used to depict and engrave the architectural details, the canopies and jewellery. On this raised part the gold foil is applied and precious stones placed after demarcating and cutting out the gold foil in the identified areas. The remaining portion is then painted. The colours that stand out are pink, green, blue. 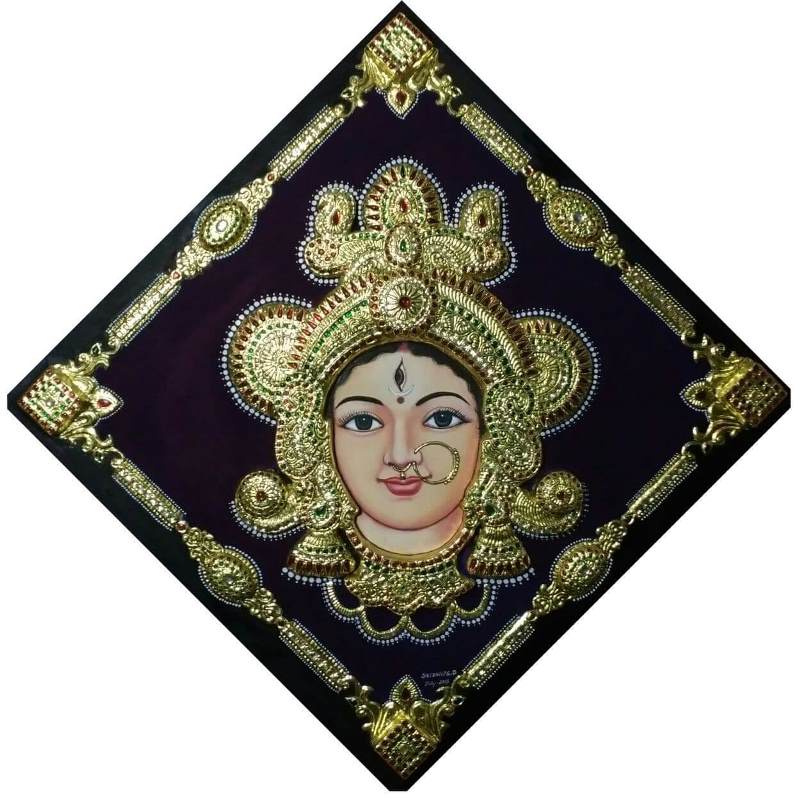 Mr Sreenivas has done several paintings ranging from the tiniest frames to the huge ones. Having loved art from a very young age, he says his notebooks had more drawings than notes. Choosing to follow his passion for art, he pursued a course offered at Chitrakala Parishat in Traditional art and also had mentors in the field of art. He also teaches Tanjore and Mysore art to art enthusiasts. Some of his Tanjore paintings and some work in progress which he generously shared with me have been featured here. Strings of heritage will be collaborating with Mr. Sreenivas in this coming year to bring the beauty of Tanjore to many more homes. Will post updates on workshops shortly.

Until then, twinkles to all of you.